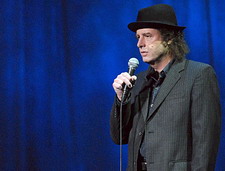 I went to a restaurant that serves “breakfast at any time”. So I ordered French Toast during the Renaissance. ~Steven Wright

Comedian Steven Wright is often credited with launching an entirely new genre of stand-up comedy. His dead pan, monotone delivery of clever and kooky one-liners is always with a straight face, and no one had seen anything like that before he burst on the comedy scene in the 80s.

You might assume that Wright’s style is a concocted stage persona, but the truth is a bit more interesting. Wright delivered his jokes that way when he first started simply because (a) that’s the way he speaks, and (b) he was trying to get the words out right.

In my early sets I would have a straight face because I was scared of being onstage and I was trying to remember my act so I was just concentrating seriously on saying the material the right way. And when you do something serious, that’s just how you look.

Here are five of Steven Wright’s wisecracks that contain wisdom for content marketers:

“Ambition is a poor excuse for not having enough sense to be lazy.”

You’ve heard all the blogging nonsense… post every day, post five times a week, post twice a week, but always on the same two days. Bah.

“To steal ideas from one person is plagiarism; to steal from many is research.”

If you’re staring out the window waiting for a great new idea, I’m afraid you might be in for a content dry spell. Great ideas come from discovering new perspectives in your field of expertise, and making new connections with concepts and ideas outside your subject area.

Dig deeper than everyone else for a fresh angle. Broaden your perspective by immersing yourself in the ideas of people you don’t agree with. Read more fiction, subscribe to unrelated RSS feeds, go watch a comedy show.

How else are you going to notice the cowbell?

“Everyone has a photographic memory. Some just don’t have film.”

My guess is you’re noticing interesting connections and potential hooks several times a day, but you’re just not getting them down on paper for later use. “Sitting down to write” is the last part of the process… the ideas have to come first.

Here’s what Wright says about it:

Whenever anyone wakes up in the morning till when you go to sleep, like a thousand pieces of information go past you. Like, you’re going to get coffee, you read something on a bulletin board, you have a conversation with someone who says a word, or you hear some concept and just some of those things just jump out to me as jokes. I can’t sit down at a desk and write jokes. They come from me reacting to my surroundings.

Unless your memory is exceptional, don’t let your best content ideas slip away during the course of the day. Preserve them in a way that works for you.

“Experience is something you don’t get until just after you need it.”

To be an effective content marketer, you’ve got to try new things. Not everything will work as well as you might hope, but if you don’t try unique new things, you’re doomed to wannabe land. The key is to try things out, and pay careful attention to what works and what doesn’t. Your audience will tell you.

Don’t get attached to a certain tactic or approach if the audience doesn’t respond. Wright, like all comedians, tries out new material on stage. His rule is that if a new joke fails to get a laugh three times, it’s gone—no matter how funny he thinks it is.

I don’t think it’s wrong; it’s just that they don’t agree. They being the audience. They’re like a bunch of editors and they don’t know it.

“The problem with the gene pool is that there is no lifeguard.”

Content marketing within the realm of social media is extremely powerful, but it does have a downside. Any time people are involved, there’s room for ugliness and stupidity.

Whether it’s the hateful little boys from Digg, or comment spammers, or clueless types who don’t bother to read your content carefully before commenting, such is the life of the content marketer. Don’t let it get to you… its all part of the game.

At the end of the day, you’re building an asset with your content. With that perspective, it’s easy to ignore the flotsam in the gene pool.

Remember that you produce content for a reason, not for its own sake. You’re doing a lot of hard work as a content marketer, and it’s easy to get distracted by the ancillary aspects of blogging (like trying to impress your peers instead of speaking to your prospects). Your content is designed to promote you or your business… all the other stuff is just excess baggage.

Or as Wright says:

You can’t have everything. Where would you put it?

Previous article: Seven Copywriting Tips for a Well-Staffed Business Website
Next article: Does Your Content Work for an Aging Population?