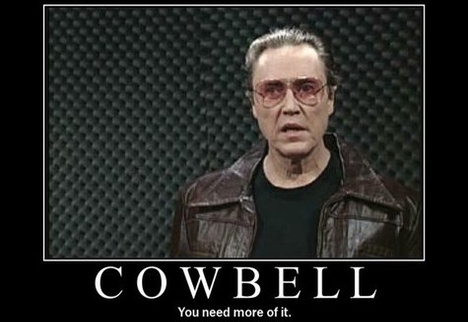 In April of 2000, Saturday Night Live aired one of the few truly classic sketches outside of the 1970s and 80s. The sketch is a spoof of a VH1 “Behind the Music” episode featuring Blue Öyster Cult and the recording of (Don’t Fear) The Reaper (watch it here).

The sketch stars host Christopher Walken as famed producer “THE Bruce Dickinson,” with Will Ferrell on cowbell alongside a faux Blue Öyster Cult. The whole joke centers around the fact that the song has a cowbell percussion element that will never be more obvious than played by Ferrell.

Someone came up with the idea for this sketch simply because they paid closer attention to (Don’t Fear) The Reaper than most everyone else. It’s the same with copy… the copywriter who digs deeper into product research and the mindset of the prospect often finds the gem that others don’t see, which leads to a killer promotion.

Successful content relies on the hook, the angle, the tiny little element no one else takes time to notice. It’s not that others are more talented than you, it’s that they work harder finding the winning difference.

In the blogging game, there are two typical winners:

The person who gets the scoop.

And the person who notices, thinks about, and amplifies the cowbell.

Previous article: The Art of Winning the Online Marketing Game
Next article: 10 Quick and Simple Ways to Power Up Your Customer Testimonials