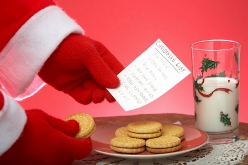 In the eight Christmases since life changed my name to Dad, Santa’s list has never been more important.

In our house, the tradition is that each child requests a single gift from the big guy. The problem is, this year both kids asked for something a little beyond Santa’s typical reach.

Fortunately, my wife and I have learned enough about persuasion and selling to turn our trip to the store into an opportunity to keep the magic alive a little longer.

It’s important to me that Santa deliver what they ask for. My kids are five and seven, and still believe. I’d like to preserve that bit of childhood magic as long as I am able.

My daughter originally wanted to ask Santa for “Biscuit,” a battery-operated dog that does tricks on command and is roughly the size of a Shetland pony. I’m not positive, but I think Biscuit may require a car battery to start barking.

My son planned to ask Santa for the Lego Star Wars Imperial Cruiser. This thing has roughly the same number of pieces as a glass garbage truck driven from a rooftop, and a sticker price equivalent to my winter electricity bill.

Our mission: steer our daughter toward a Fur-Real Panda Bear which is just a fraction of Biscuit‘s price tag, and get our son drooling for Darth Vader’s TIE Fighter, which is smaller and more within our budget.

Entering the toy department armed with our strategy, here are five basic selling principles which we used to get our children to not only alter their wish lists, but want their new gifts even more than they did the old ones:

This one was awesome because I didn’t even have to try. There it sat, all the way at the top of a shelf so high not even my 6 ‘ 3’’ frame could tickle the Fur-Real Panda Bear. The rest of the selection lay littered along the bottom shelves.

“Uh-oh,” I said. “We’re going to have to ask someone to help us get the panda bear down.”

My daughter asked why the panda was up so high away from all the others. I told her it must be because everybody wanted him and there were only a few left.

“Oh,” she whispered. My daughter rarely whispers. Other people’s desires amplified her own. My daughter’s not greedy, but she is human, and humans tend to want something all the more the second it seems out of reach.

My son and I struck out on our own, leaving my wife and daughter to think about the panda.

I slipped into a story about Darth Vader and his planet-blasting Death Star. My voice rose in pitch, my hands in the air. I quieted to a whisper. I was an actor reciting Shakespeare and my son’s mouth was an open O.

“Hey, have you ever thought about asking Santa for Darth Vader’s TIE fighter?” I asked. “I bet he would get it for you.”

I pulled the box from the shelf and placed it in my son’s hands. His eyes lit up and he turned it this way and that through the air, the sounds of laser blasts spraying from his lips.

Information is important, but people connect to stories. If you want someone to both relate to your information and remember it later, deliver it in a “once upon a time.”

My son was fondling the box. I figured he was about a third of the way to wondering why in the Hoth he had ever wanted a starship when he could’ve been asking for Darth Vader’s TIE fighter all along.

But we weren’t quite there yet.

“The TIE fighter’s a lot smaller,” I explained, pointing to Darth Vader’s home away from home. “The starship is like five times bigger.”

He asked how many pieces are in the starship. I smiled. It was like he was doing half the work for me. “It’s five times the size because it has five times as many pieces.”

Now even though my son LOVES pieces, this was an easy objection to get past.

“Hmmm.” At this point, I was actually stroking my chin like some cartoon character. “If you ask Santa for Darth Vader’s TIE Fighter, then we’ll be able to put it together and take it apart a lot more times.” I smiled wide and dropped to my knees so my eyes met my son’s. “We’ll get to play with it more because it will be put together more often.”

My son’s smile is always bright, but this one was even brighter than usual. You can’t ignore objections, but you can identify and address what the other person really wants. And in this case, it was to spend more time with his daddy playing.

Once you know what your buyers are really looking for, you can rob objections of their power.

When we rejoined the girls, my daughter asked how I would decide between the two toys. She’s a practical girl and, like her father, loves to linger on several sides of an argument.

“Well, at first I thought it was close,” I said, nose wrinkled, “but then I started thinking about it. Now I’d have to say the panda is the clear winner.”

She wanted to know why.

“Well, his size for starters,” I said. “Biscuit is so big, you’d never want to take him up and down the stairs.”

We live in a hundred-year-old Victorian, and there are times when going upstairs feels like it should come with the help of a Sherpa.

I also explained that because of its size, the panda could keep her company and sit next to her while she’s doing her homework or is at the computer.

I let that sink in, then added, “The panda could even sleep with you, I bet. Biscuit would probably just sit in one place most of the time.”

When you’re writing to persuade, don’t forget to articulate what’s great about the experience. Give them the wind in their hair and let them clearly feel the smile on their face.

I’m lucky enough to be around my children for most of the minutes they aren’t in school. Getting them to change Santa’s list was made simple by first knowing them inside out and then communicating as effectively as possible.

Working out a communication plan with my partner ahead of time, using the same principles that make a sales letter work, made it a paint-by-numbers process.

While it’s highly unlikely you’ll get prospects that you can know as well as your children, you can get to know them. Pay attention to the details, ask the right questions, and uncover not just what they want, but why they want it. Do that, and you’ll be able to meet their needs.

There is a laser-thin line between many of the principles of friendly, honest selling and highly effective parenting.

With both, you must allow the learner or buyer to stumble onto your solution as though it was their idea all along. Sure, you use the authority you’ve built, but you also let your audience come to their own conclusions.

Trust is the key

Of course none of these tactics would have worked if our children didn’t believe in us.

And trust is an integral part of these strategies. I’ve never lied to my kids (you and I both know Santa doesn’t count) and have never let them down. I have never done anything to damage our bond and so they trust me entirely.

Previous article: How to Brainstorm Brilliant Ideas for Your Blog
Next article: Five Smart Things You Can Still Do in 2009