Many bloggers already know that Twitter is one of the best ways to drive traffic to your blog.

When I talked to Guy Kawasaki about my book, he called the Tweetmeme Retweet button “the most important button on the web,” because of the enormous traffic-driving power it possesses. With one click, any of your readers can spread your post to hundreds or thousands of their followers.

As a marketer, I, of course, see this as an opportunity for optimization. When I see a powerful tool, my first impulse is to figure out how to make it even more powerful.

When you click that button, Tweetmeme grabs the title of the page it’s on, shortens the URL, and combines the two into a autofilled tweet for posting. Thus, the title of your post becomes the tweet that is shared with a potentially huge number of Twitter users.

If the importance of compelling headlines wasn’t painfully obvious before, it should be now.

Nearly 20% of all “normal” tweets contain a link, yet almost 70% of retweets do. Retweeting is the most common way links are shared on Twitter.

I’ve done research into various factors surrounding retweets and found a handful of factors that you may want to take into consideration when writing headlines for posts that you hope to share and spread on Twitter.

Use nouns and third-person verbs 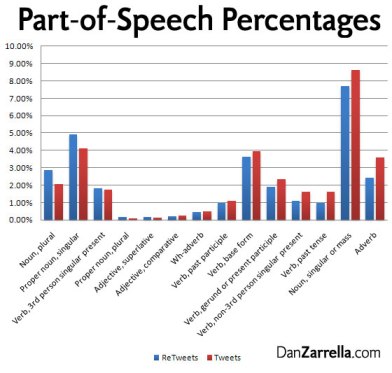 When I looked at the parts of speech that occur in retweets versus those that occur in normal tweets, I found that retweets tend to be noun-heavy and use third-person verbs.

This pattern is reminiscent of newspaper headlines. Highly retweetable headlines talk about someone or something doing something.

A headline should never talk about all the things you did yesterday and how you did them, as past-tense verbs and adverbs both lead to far fewer retweets.

The most (and least) retweetable words

The words that tend to occur more in retweets than in normal tweets are topped by the word “you.”

This means, whenever possible, you should talk directly to your readers. “Top” and “10” also rank highly, showing that lists do well on Twitter. Not surprisingly, talking about social media and Twitter itself also helps.

On the other side of the coin are the least retweetable words. Random first-person verbs and details about your life, however fascinating you may find it, don’t get a ton of retweets.

Tell me something new 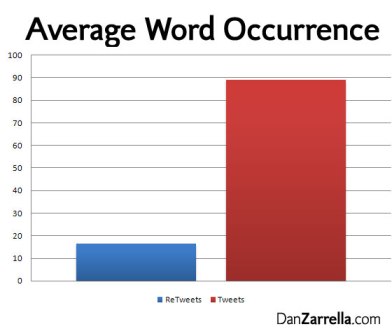 I compared how common words in retweets are to how often these same common words appear in normal tweets, and found that rare and more novel words are highly retweetable.

When you’re writing your headlines, you should be striving to say something new that breaks through the clutter of everyday chatter. 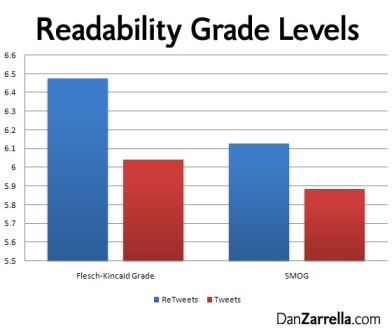 I expected to find that retweets were simple and required less intelligence to understand. But my data showed the opposite.

Using two readability metrics, I found that retweets often use longer, more complex words. So don’t try to “dumb down” your headlines for Twitter; users and power retweeters are smarter than you may think.

Stop talking about yourself 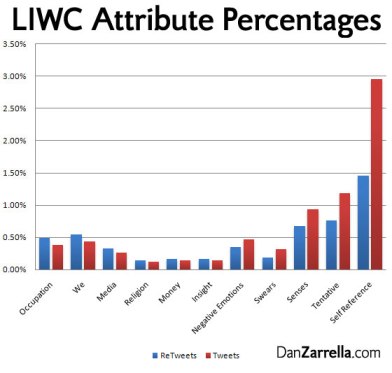 LIWC is a linguistic system designed to identify concepts in pieces of text.

The most striking thing I found when using LIWC to analyze retweets is that self reference does not get a lot of sharing.

If you’ve been in social media awhile, you probably already guessed that was the case — now you’ve got the data to back it up.

Previous article: Does Speech Recognition Software Really Work?
Next article: Four Things 50 Cent Can Teach You About Connecting with Your Audience