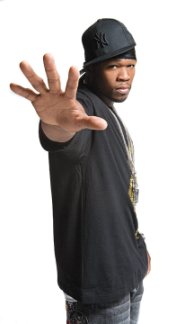 I spent most of 2007 hanging out with Curtis Jackson, better known as Fifty Cent. Together we wrote a bestselling book about hustling, fearlessness, and power.

After the remarkable success of his first two commercial albums, Fifty Cent stood on top of the music world. But his very success was starting to corrode his musical ability.

His sense of connection, so vital on the streets, was fading in this new environment he now inhabited.

He was surrounded by flatterers who wanted to be in his entourage, managers and industry people who saw only dollar signs in him. His main interactions were with people in the corporate world or other stars.

At the same time, he could no longer hang out on the streets or get firsthand looks at the trends that were just starting up.

All of this meant that Fifty was flying blind with his music, not really sure if it would connect anymore with his audience. Other stars didn’t seem to mind this; in fact, they enjoyed living in this kind of celebrity bubble. They were afraid of coming back down to earth. Fifty felt the opposite, but there seemed to be no way out.

Know your environment from the inside out

Most people think first of what they want to express or make, then find the audience for their idea. You must work the opposite angle, thinking first of the public. You need to keep your focus on their changing needs, the trends that are washing through them. Beginning with their demand, you create the appropriate supply. Do not be afraid of people’s criticisms—without such feedback your work will be too personal and delusional. You must maintain as close a relationship to your environment as possible, getting an inside “feel” for what is happening around you. Never lose touch with your base.

An experiment in reconnection

In early 2007, Fifty decided to start up his own website. He thought of it as a way to market his music and merchandise directly to the public, without the screen of his record label, which was proving quite inept in adapting to the Internet age.

First, he decided to experiment. As he prepared to launch a G-Unit record in the summer of 2008, he leaked one of the songs on to the website on a Friday night, then the next day he refreshed the Comments page every few minutes and tracked the members’ response to it.

After several hundred comments it was clear that the verdict was negative. The song was too soft. They wanted and expected something harder from a G-Unit record.

Taking their criticisms to heart, he shelved the song and soon released another, creating the hard sound they had demanded. This time the response was overwhelmingly positive.

He put up the latest single from his arch-enemy The Game, hoping to read the negative comments of his fans. To his surprise, many of them liked the song. He engaged in an online debate with them about this and had his eyes opened about changes in people’s tastes and why they had perhaps grown distant from his music. It forced him to rethink his own direction.

To draw more people to his site, Fifty decided to break down the distance in both directions. He posted blogs on personal subjects, and then responded to his fans’ comments. They could feel they had complete access to him.

Using the advances in technology, he took this further, having his team film him on their cell phones wherever he went; these images were then streamed live on the website. Made dramatic by Fifty’s flair for confrontation, membership grew by leaps and bounds.

As it evolved, the website came to strangely resemble the world of hustling that Fifty had created for himself on the streets of southside Queens.

He could produce testers (trial songs) for his fans, who were like drug fiends, constantly hungry for new product from Fifty; and he could get instant feedback on their quality. He could develop a feel for what they were looking for and how he could manipulate their demand.

He had moved from the outside to the inside and the hustling game came alive once more, this time on a global scale.

Four keys to the fearless approach

The public is never wrong. When people don’t respond to what you do, they’re telling you something loud and clear. You’re just not listening.

Most of us live in a society of apparent abundance and ease. We lack a sense of urgency to connect to other people. In such a melting pot as the modern world, with people’s tastes changing at a faster pace than ever before, our success depends on our ability to move outside of ourselves and connect to other social networks.

At all cost, you need to continually force yourself outward. You must reach a point where losing this connection to your environment makes you feel uncomfortable, even vulnerable.

The following are four strategies you can use to bring yourself closer to this ideal.

In this day and age, to reach people you must have access to their inner lives — their frustrations, aspirations, resentments.

To do so, you must crush as much distance as possible between you and your audience.

You enter their spirit and absorb it from within. Their way of looking at things becomes yours. And when you recreate it in some form of work, it has life. What shocks and excites you will then have the same effect on them.

This requires a degree of fearlessness and open spirit. You are not afraid to have your whole personality shaped by these intense interactions. You assume a radical equality with the public, giving voice to people’s ideas and desires.

What you produce will naturally connect in a deep way.

When Eleanor Roosevelt entered the White House as First Lady in 1933, it was with much trepidation. Denied an official position within the administration, she decided to work to create informal channels to the public, on her own.

She traveled all over the country — to inner cities and remote rural towns — listening to people’s complaints and needs. She brought many of these people back to meet the president and give him firsthand impressions of the effects of the New Deal.

She opened a column in The Woman’s Home Companion, in which she let her audience know, “I want you to write me.” She would use her column as a kind of discussion forum with the American public, encouraging people to share their criticisms.

Within six months she had received over 300,000 letters, and with her staff she worked to answer every last one of them.

She began to see a pattern from the bottom up — a growing disenchantment with the New Deal. Every day, she left a memo in her husband’s basket, reminding him of these criticisms and the need to be more responsive. And slowly, she began to have an influence on his policy, pushing him leftward. All of this took tremendous courage for she was continually ridiculed for her activist approach, long before any First Lady had ever thought of such a role.

As Eleanor understood, any kind of group tends to close itself off from the outside world. From within this bubble, people delude themselves into thinking they have insight into how their audience or public feels — they read the papers, various reports, the poll numbers, etc.

But all of this information tends to be flat and highly filtered. It is much different when you interact directly with the public, hear in the flesh their criticisms and feedback. You create a back-and-forth dynamic in which their ideas, involvement and energy can be harnessed for your purposes.

3. Reconnect with your base

We see it again and again.

A person has success when they are younger because they have deep ties with a social group. Then slowly they lose this connection.

In his own way, the famous black activist Malcolm X struggled with this problem. He had spent his youth as a savvy street hustler, ending up in prison on drug charges. Out of prison he became a highly visible spokesperson for Nation of Islam, channeling his emotions into powerful speeches that gave voice to those who lived deep in the ghettos of America.

As he became more and more famous, he made an effort to inoculate himself from the psychic distance experienced by other successful leaders in the black community.

He increased his interactions with street hustlers and agitators, the kind of people from the lower depths that most leaders would scrupulously avoid. He made himself spend more time with those who had suffered recent injustices, soaking up their experiences and sense of outrage.

The goal in connecting to the public is not to please everyone, to spread yourself out to the widest possible audience. You have a base of power — a group of people, small or large, who identify with you. Keep your associations with it alive, intense and present.

Return to your origins — the source of all inspiration and power.

Instead of turning inward, consider people’s coolness to your idea and their criticisms as a kind of mirror that they are holding up to you.

Your ego cannot protect you — the mirror does not lie. You use it to correct your appearance and avoid ridicule.

The opinions of other people serve a similar function. You view your work inside your mind, encrusted with all kinds of desires and fears. Through their criticisms you can get closer to this objective version and gradually improve what you do.

When your work does not communicate with others, consider it your own fault. You did not make your ideas clear enough, you failed to connect with your audience emotionally. This will spare you any bitterness or anger that might come from people’s critiques. You are simply perfecting your work through the social mirror.

Robert Greene is the bestselling author of The 48 Laws of Power (two million copies sold) and The 50th Law with 50 Cent. His latest book, Mastery is being released November 13, 2012. Check out Robert's blog at Power, Seduction and War.

Previous article: Here’s Hard Data for Headlines that Spread on Twitter
Next article: 10 Ways to be a Copywriting Jedi