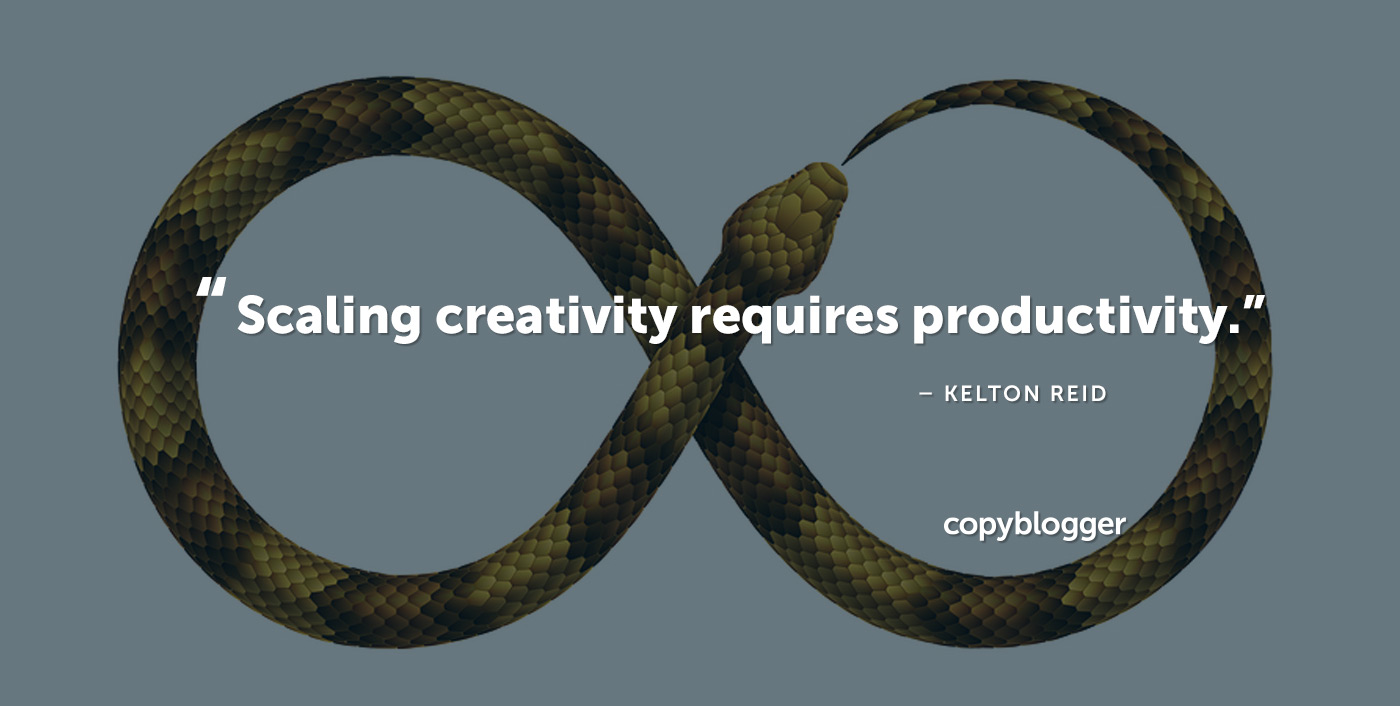 At this strange moment in history, we face a near daily Sisyphean task as writers, online content creators, and freelancers.

There’s a great fallacy of creativity — that it happens in a vacuum outside of spacetime, in some magical realm that produces sparkling idea unicorns.

Our work-life scales are bending dangerously toward more busywork and distraction, less innovation and efficiency, and even greater job dissatisfaction.

But without a modicum of creativity, those processes lose the iterative and agile nature that traditionally build an audience.

I’ve spoken at length about why you should redefine your definition of productivity.

Creativity and productivity are forever intertwined in an endless loop, and an imbalance in one often short-circuits the other.

ou·ro·bo·ros (yoor′ə-bôr′əs)
n.
A symbol in the form of a snake biting its own tail, used especially … as an emblem of eternity. – American Heritage Dictionary

The neuroscience of productivity vs. creativity

Unlike productivity, creativity is nearly impossible to quantify, and there’s a good reason for this.

I asked neuroscientist Michael Grybko about this phenomenon in the creative fields and he had some important thoughts on the subject (gritty details forthcoming on The Writer Files podcast).

He reminded me that the sum total of a great creative feat is quantifiable, but the immense effort it requires is done invisibly behind the scenes, sometimes for decades.

“… We often only experience the end result of the creative process; the painter’s masterpiece in a museum, the Pulitzer Prize-winning author’s book, or the Grammy-awarded musician’s recordings. The [countless years] a musician spends practicing scales to train his/her ear often go unnoticed.” – Neuroscientist Michael Grybko

AKA: The iceberg analogy

It’s impossible to see the incredible neuronal processes of the brain that come up with innovative and surprising ideas, and the 10 percent we do see doesn’t tell the whole story.

At the base level, the four stages of the creative process involve:

Enter the iterations of the content creation process needed for building an audience.

Listening, gathering data, creating relevant content based on your audience’s hopes, dreams, and fears. Then publication and more listening for feedback before embarking on the journey all over again.

Building an audience (or a social movement) is an iterative process that requires an enormous amount of work and energy to get started, but once it’s underway it can generate a positive feedback loop of its own.

You’re relying far more on what Bill McKibben called “the technology of community” than any data, machine learning, or generalized intelligence can tell you.

Drowning in data, starved for wisdom

“As we’re flooded with more and more data and more and more distractions, and as artificial intelligence grows more intelligent, it’s essential that we appreciate and protect separate and innately human qualities like wisdom and wonder.” – Arianna Huffington

Will automation and deep-learning A.I. threaten to make our workdays a multitasking extravaganza of reduced productivity and also price us out of creativity?

Luckily, there are lots of highly creative tasks that robots and A.I. still can’t do, like solve crimes, or write insightful novels or highly engaging blog posts.

The machines may never possess the empathy or accumulated wisdom required to discover novelty or surprise us with their insights.

People skills will always be for the people, by the people

“[Humans] can connect seemingly disparate threads to solve problems. This puts a fundamental limit on the human tasks that machines will automate.” – Anthony Goldbloom, CEO of Kaggle

In other words, humans will always be better at communicating new ideas and grabbing attention.

“Behaviors that have been chastised today as being unproductive, by a culture that mostly fetishizes measurable outputs like hours worked and reports produced, seem to actually be some of the most productive.” – Zat Rana

Some solutions for re-calibrating your scales of creativity and productivity:

“Beware of technology that claims to solve your problems with more technology.” – Manoush Zomorodi, author of ‘Bored and Brilliant’

In 2018, a firm in New Zealand did an experiment that shrunk all of their 240 employees’ weekly hours from 40 to 32, “… while still paying the same salaries.”

The findings concluded that “… their actual job performance didn’t change when doing it over four days instead of five.”

Which leaves you a whole day for doing things to inspire your creativity!