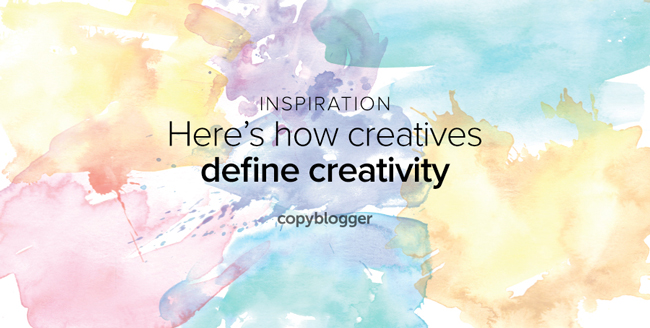 She was an odd mix of soft skin and rowdy in the mouth.

And by that, I mean she was bright, chirpy, and quick with the quirky jokes, ribbing it with the best of them, but prone to fits of sobbing at the first sign of disagreement.

I needed to be cautious. To curb my Neanderthal-like love for hurling abuse at editorial outlaws. Not to mention, she was new.

The woman who sat in the chair opposite my desk in a book-lined office was one of the most promising writers in our creative department. The problem was, she was late on her first deadline. Really late.

I took a deep breath.

“I gave you an extra week. Help me understand why I don’t have that article yet,” I said.

She shrugged and cracked a smile. I waited for an answer, but nothing.

She looked down at her hands, then looked at me in the eyes, the smile gone.

“You know how it is. The inspiration just hasn’t hit yet.”

I nodded and fidgeted with a hangnail.

That’s when her lower lip began to tremble and her eyelids started blinking rapidly.

“The inspiration just hasn’t hit yet” is one among a long line of myths about creativity. Here are four more:

But these aren’t just myths. They are also excuses.

They are excuses we use to avoid doing the work because we fear rejection, criticism, and failure.

I get it. I’m also an odd mix of roughneck and delicate soul.

I remember thinking to myself in an introductory-level college poetry class that no one dare criticize my work. Of course, I had no shortage of harsh comments for my fellow poets.

Call it overcompensation for a deep insecurity. Grossly exalted view of self. A freaked out perfectionist. Whatever the source, it was crippling my creativity.

I eventually learned my lesson. Creativity comes at a price.

But what exactly do we refer to when we talk about creativity?

Michael Grybko, neuroscience research scientist and engineer from the Department of Psychology at the University of Washington, is pals with Kelton Reid, Rainmaker Digital’s VP of Multimedia Production and host of The Writer Files podcast. Michael’s been on Kelton’s show a number of times.

Naturally, the episode I want to focus on now is about creativity. So, Mr. Grybko, what is creativity?

“In science, we define ‘creativity’ as an idea that is novel, good, and useful. It’s a little broader than the Oxford Dictionary’s definition, where it’s just the ability to create, because that doesn’t really say much. You can create something and it’s not very useful or it just won’t work well.”

Did you get that? According to Mr. Grybko, creativity is “an idea that is novel, good, and useful.” Fair enough. But Michael’s not done.

“Pooling from this wealth of knowledge we store in our brains and making connections between different ideas, we have to solve a new problem, or create, write a new novel — that’s what science looks at when we study ‘creativity.’ Just to drive home the point, this is very much a function of the brain. There’s no need to invoke all that folklore into this. It’s our brains doing what they do.”

“It’s our brains doing what they do.” I love scientists! They spoil all of our mystical fun. (Just kidding.)

Anyone can be creative, not just a privileged few

Mr. Grybko is simply explaining that anyone can be creative. Not just a privileged few.

This got me thinking: How would non-scientists respond to this question? What about a punk rocker? What would he say about creativity?

What about a popular non-fiction author? A digital entrepreneur? A marketing dissident?

Fortunately for you, we have answers!

The Writer Files (which started as a regular column on Copyblogger) has gathered thought-provoking responses to the question, “What is creativity?”

You can read the full interviews by clicking on each person’s name. And don’t forget to download the free poster at the end of this post.

“Seeing the intersection of seemingly unrelated topics and combining them into something new.” – Brian Clark

“Starting with nothing and ending up with something. Interpreting something you saw or experienced and processing it so it comes out different than how it went in.” – Henry Rollins

“Building universes out of nothing.” – Danny Sullivan

“Tapping into your soul and your intuition and allowing them to guide what you make.” – Bernadette Jiwa

“Giving the world something it didn’t know it was missing.” – Daniel Pink

“Living in possibility and abundance rather than limitation and scarcity.” – CJ Lyons

“To me, creativity is seeing and communicating ideas in ways that are unique, compelling, and unexpected.” – Lee Odden

“Creativity (n): a word people use when they want to sound smart talking about a really abstract subject. Me? I prefer to avoid abstractions.” – Jon Morrow

“The strange partnership between a human being’s labor and the mystery of inspiration.” – Elizabeth Gilbert

“Seeing something that doesn’t exist and then making it so.” – Hugh Howey

“The ability to connect the seemingly unconnected and meld existing knowledge into new insight about some element of how the world works. That’s practical creativity. Then there’s moral creativity: to apply that skill towards some kind of wisdom on how the world ought to work.” – Maria Popova

“Just making something. It might be something crummy or awkward or not ready for prime time. If you make something, you are creative.” – Sonia Simone

“Taking what’s in front of you and everybody else and making something new out of it.” – Austin Kleon

“Creativity brings good things in the world that otherwise would not exist. It’s a noble act of pushing back darkness and giving hope to despair.” – Jeff Goins

“Creativity is expressing your ideas in a full-contact, full-color way. It is using as many senses as possible to express an idea. It is the zone from which great, useful things are created.” – Pam Slim

“Seeing patterns that others don’t and effectively communicating them.” – David Meerman Scott

Interesting responses, right? Lots of fun. But we aren’t finished yet …

Get the “What Is Creativity?” poster 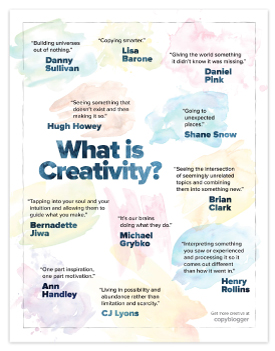 We created a two-page poster with all the responses that you can download (922 KB), print, and hang near your desk for inspiration.

Before you go, don’t forget to answer the question, “What is creativity?” Drop us your thoughts in the comments section below. We would love to hear your answer.

Here’s the cool thing: If we get a wide variety of answers with different points of view, we’ll take them and create another blog post and poster. So, let us know what you think. 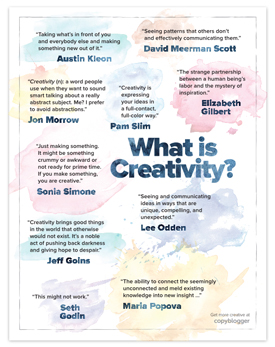 P.S. Remember the timid writer in the introduction of this article? The one on the verge of a meltdown over a missed deadline?

Yeah, there was some major weeping and gnashing of teeth that day, but she got the picture and finally turned in the late assignment.

More importantly, she continued to respond well to my critical confrontations, eventually becoming a prized writer — what I call a “pit bull on paper.” I’m very proud of her!

Previous article: Rainmaker Rewind: Strategies for B2B Podcasting, with Clark Buckner
Next article: Making a Business Out of Her Life