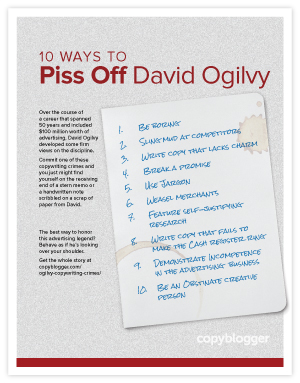 Sure, he may be a gentleman with brains, but this English oven salesman turned chef turned farmer turned advertising giant has a temper.

For example, when he sat down to write only to find he had no ideas, he said, “I get bad-tempered. If my wife comes into my room I growl at her. (This has gotten worse since I gave up smoking.)”

In a note to the heads of his offices before planned visits he wrote, “Waiting for food puts me in a foul mood.”

But it seems he reserved his strongest moments of outrage for advertising.

Advertising themes that demand your attention

Over the course of a career that spanned 50 years and $100 million worth of advertising, David developed some firm views on the discipline. In fact, David repeated them so often in his lectures, interviews, and memos, you might call them themes.

Themes he wanted infused into his agency’s corporate culture.

Violate one of these themes and you just might find yourself on the receiving end of a stern memo or handwritten note scribbled on a scrap of paper from David.

In this online age (where brevity rules the roost), these themes still demand our attention.

And since the editor of The Unpublished David Ogilvy said David was fond of lists, what better way to share these copywriting crimes that angered Mr. Ogilvy than with a list?

The worst fault a salesman can commit is to be a bore.

– From a 1935 guide a 24-year-old David Ogilvy wrote for the entire staff of Aga Cooker salesmen.

More than fifty years later, at the age of 76, Ogilvy was asked in an interview, “What bugs you?” He replied:

Bores. Above all bores. I think boring is the ultimate sin.

On no account sling mud — it can carry very little weight, coming from you, and it will make the prospect distrust your integrity and dislike you.

– From a 1935 guide a 24-year-old David Ogilvy wrote for the entire staff of Aga Cooker salesmen.

It plods. Heavy as lead. The models — most of them — look like automobile dealers from South Dakota.

Joel: I thought you promised to show me the Sears ads (with copy) last Tuesday. It is now three months since Struthers picked them. Longer than the period of gestation in pigs.

– From a handwritten note to Joel Raphaelson (circa 1964).

A brand manager who recently left told the agency that he was pursuing a policy of PRE-EMPTIVE DIMENSIONALIZATION OF BETTERMENT.

– To Alex Biel, former Executive Director of The Ogilvy Center for Research & Development.

6. Be a weasel merchant

We abhor buck passers, and people who don’t tell the truth.

– From a 1960 Christmas talk to staff members. (Weasel merchants are companies and advertisers who stretch the truth to sell.)

We all have a tendency to use research as a drunkard uses a lamppost — for support, but not for illumination.

– From David’s talk to the National Industrial Conference Board, April 1961.

8. Write copy that fails to make the cash register ring

As a copywriter, what I want from the researchers is to be told what kind of advertising will make the cash register ring.

– From the 50th Anniversary Luncheon of the Advertising Research Foundation, March 18, 1986.

9. Demonstrate incompetence in the advertising business

I look at an ad or commercial, all too many of the commercials in fact, and I say that is just an incompetent piece of work. The guy doesn’t know what he is doing.

– From an interview in Ogilvy & Mather’s quarterly employee publication ‘Viewpoint,’ circa 1986, when Ogilvy was 76.

10. Be an obstinate creative person

Creative people who refuse to study the product or the research or to admit there’s more than one way to skin the cat.

– From an interview in Ogilvy & Mather’s quarterly employee publication ‘Viewpoint,’ circa 1986, when Ogilvy was 76.

Want a poster of these copywriting crimes?

PDF Poster: Download the PDF poster of these copywriting crimes (627 KB), suitable for printing and hanging near your workspace when you need to see it most.

Embed this graphic on your own site

Shareable Graphic: If you’d prefer to publish the image of these copywriting crimes on your own site, we’ve also got a Copyblogger Shareable for you …

Copy and paste the following code into your blog post or web page:

Behave as if he’s looking over your shoulder.

Previous article: Are These 4 Common Legal Mistakes Putting Your Content at Risk?
Next article: 5 Ways to Blast Off Your Freelance Writing Income Through Massive Action