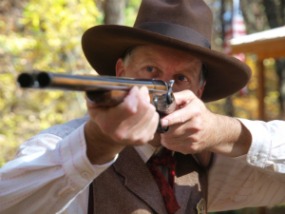 To listen to some people, you’d think marketing were a battle or bloodsport.

Think about all the military metaphors we use — identifying a target market, launching a campaign, and using strategy and tactics to crush competitors and win that desired customer.

Even such apparently innocuous business terms as staff, officer, headquarters, division, and operations are rooted in military terminology.

And of course, no self-respecting business leader’s library is complete without a dog-eared copy of Sun Tzu’s Art of War.

Hunting metaphors also tend to appeal to salespeople out to “land” a big deal (as if it were a whale) and in “shotgun vs. rifle” theories of direct marketing.

You may have even heard salespeople say (hopefully not while they’re selling to you) that “if they don’t kill, they don’t eat.”

Now, I won’t deny that these metaphors have their uses. And let’s be honest, they can make the whole process feel a little more heroic and exciting, especially on a wet Monday morning.

But do we really want to think about our customers as “targets” — to be attacked, overpowered, and killed?

And even if that appeals to us — do our customers want to feel like prey or military conquests?

Even when it comes to other businesses who provide similar products or services, is it really the smartest approach to think of them simply as competitors — to be outflanked and defeated?

Because that’s what we’re doing, subconsciously, every time we talk about our business in the language of war or hunting.

You don’t have to be “kumbaya”

Now maybe you’re not a kumbaya marketer, and you’re more interested in turning a profit than the warm-and-fuzzies of helping your customers.

But even in that case, surely you stand a better chance of repeat business if you don’t annihilate your customers and leave their butchered corpses lying on the battlefield?

This is what’s meant by the truism that customers “don’t want to be sold to.” No one wants to feel like they’ve been harpooned and bagged.

If you’re tired of the relentlessly macho tone of business-speak, you might like this alternative metaphor, suggested by Michael LeBoeuf in his book The Perfect Business:

Instead of the thrill of the chase or the blood-lust of war, LeBoeuf suggests we focus on “cultivating the relationships and forming the type of work habits that lead to long-term success”.

No, it doesn’t sound as glamorous as landing a big fish or crushing your enemy underfoot. But most of the time, business isn’t like that.

It’s not about quick wins and spectacular victories; it’s about slow and steady effort.

It’s not about killing; it’s about growing

Over the past few months, LeBoeuf’s words have taken on particular resonance for me. Last year, when the arrival of kids meant we’d outgrown our cozy city flat, we moved into a house with a large garden at the back.

It’s the first time I’ve lived in a house with a garden since I was a kid myself, and the more time I spend here, the more parallels I see between taking care of the garden and taking care of business.

Now before I go any further, I should say I don’t exactly have green fingers. My contribution to the gardening is mostly limited to mowing the lawn, cutting things down, and chopping them up to put on the compost.

My wife does all the creative stuff like planting flowers and coaxing fruit and vegetables from the earth. And we have a real gardener, Sean, who helps us out every few weeks by doing the skilled work and giving us the benefit of his expertise.

But I spend a lot of time in the garden.

Unless it is raining really hard, I start each day with half an hour’s walking meditation among the trees and shrubs. When the weather’s nice I love drafting new ideas in the sunshine, and the simple gardening chores I perform are a wonderful antidote to all those hours indoors on the computer.

So here are a few leaves entrepreneurs can take out of the gardeners’ Bible:

1. You are not in control

Yesterday we discovered our prized courgettes and some of our choice tomatoes had been eaten by slugs.

It’s not the first time, and it probably won’t be the last.

When you try to grow things — or stop them growing — you’re dealing with Mother Nature, and you have to do things her way. You have to contend with the soil, climate, weeds, predators, and freaks of nature.

It’s the same in business — everything looks so neat and orderly in your business plan, but it gets a lot messier when you have to deal with customers, suppliers, competitors, taxes, and technology. Not to mention the state of the economy.

Takeaway: Stop trying to control everything, embrace uncertainty, and focus on what you can influence.

2. Expect to be disappointed (and pleasantly surprised)

When we first arrived, we were thrilled to discover fruit trees at the top of the garden.

But when summer came, the apples didn’t. The pear tree did a little better — lots of juicy-looking fruit, but they were soon covered in brown welts, and Sean told us the tree must be diseased.

Finally, the plum tree came through — but only just. We realised that worms were eating the fruit when it became ripe, so we had to pick them early and let them ripen on the windowsill. But the plum jam made the effort worthwhile. 🙂

The most exciting things turned out to be the ones we’d overlooked when we first saw the garden — blackberries, tomatoes, strawberries, an amazing herb garden, and even blisteringly hot chilies.

Chances are you’ve had similar experiences with your business — big deals have slipped through your fingers, big product launches have flopped, but little experiments and side projects have turned out to be surprisingly successful. Sometimes it’s several years before your work bears fruit.

And sometimes a few small tweaks, or a little time and patience, are all it takes to turn failures into successes.

Takeaway: Give every project 100% — but be prepared for setbacks. Be alert for what you can learn from them — especially in feedback from your customers. And look out for the shoots of new growth in the most unpromising projects and ideas.

3. Deal with the weeds

There are only two things to be done with weeds: spot them and weed them out. (Without damaging your cherished plants.)

Takeaway: Don’t let the weeds get a foothold in your business. Spot them and stop them. But avoid overkill — it’s all too easy to overreact to a spammer or troll and inadvertently make your cherished customers feel like weeds.

One of the features we liked most about the garden when we moved in was a huge willow tree, overhanging from next door.

Its trailing leaves were a magnificent sight, and made the perfect backdrop to our lawns and flowers.

Then one day it was condemned. Its long roots were undermining the foundations of the house next door, so it had to be cut down. For days afterwards, every time we looked up we saw a willow-shaped hole in the sky. It just felt empty.

But we gradually got used to it, and came to appreciate the extra light in the garden. And a young elderberry tree that grew up in the willow’s shade is now coming into its own.

Maybe there’s a colossus in your business environment — a company, product, industry, or even a person — that you can’t imagine living without. But one day it will be gone. And while it might feel like the end of the world, there will be an opportunity there, for someone.

Takeaway: Think the unthinkable — What if the colossus vanished? Would it leave you exposed? Would it present you with an opportunity? Will you be prepared?

Given all the elements lined up against gardeners, the unpredictability of the outcome, and the brute hard work required, you could hardly blame them for giving up. Yet look around and you’ll notice many thriving gardens, large and small.

Next time you enjoy the sights and sounds of a beautiful garden, take a moment to reflect on the persistence of the gardeners who made it happen. If it’s pleasant for you to enjoy, how much more rewarding must it be for them?

When you run your own business, there will be many, many days when you are tested by adversity. Maybe even a few when you are tempted to quit. Often, the difference between success and failure comes down to sheer persistence.

Takeaway: Next time you have a bad day in your business and wonder why you bother, stop and think about the goal you’re trying to reach. Supposing what you’re dealing with today is the price of success — is it a price worth paying?

How do things change when you think of business as gardening instead of hunting or fighting?

What other useful metaphors can you think of for business?

And do you have any tips for getting rid of slugs?