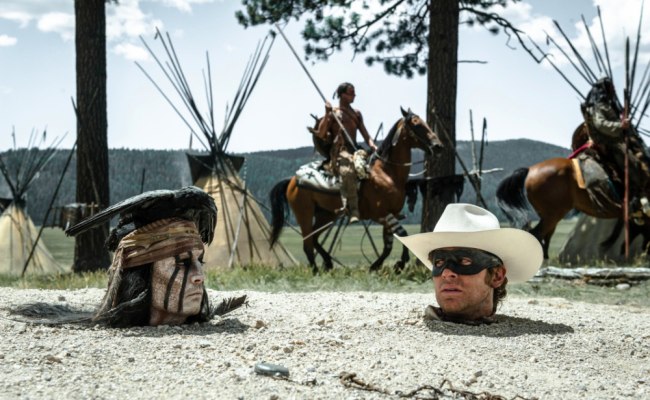 Did you see the new Lone Ranger movie? If you’re like most movie-goers, you didn’t.

You saw one of the other blockbusters instead. Or you went to the beach. Or you stayed home and had an Orange is the New Black marathon. Lone Ranger just didn’t seem like something you felt like shelling out $15 (plus popcorn) to watch.

So why talk about this quarter-billion dollar failure here?

Because the reasons the movie didn’t work (and by work, I mean make a profit) are the same reasons that kill businesses every single day. And by analyzing a spectacular failure, we can unearth some of the factors that will make your business successful.

The frustrating part for us is that we had all the ingredients here. You take a classic franchise, team the world’s most successful producer, an award-winning director and the biggest movie star in the world and you think your chances of success are pretty good. But we just didn’t make it work.

Failure is repeatable, just like success is. So let’s talk about why Lone Ranger tanked, and how your business can learn to avoid its terrible, terrible fate.

Problem #1: The critics were not kind

This summer wasn’t a great one for blockbusters in general (with some exceptions), but The Lone Ranger stood out.

If The Lone Ranger loses $190m as experts fear, the film will earn the dubious accolade of the biggest box office flop of all time. ~ World News Views

Co-star Johnny Depp has blamed the movie’s failure on terrible reviews … starting before the film was even released. When your film inspires phrases like The Guardian’s “something that isn’t exactly a gallop, more like the protracted convulsive thrashings of a dead horse with its hoof jammed in the electric socket,” you may face some problems at the box office.

But as we all know, many critical failures still make lots and lots of money. In fact, like Lone Ranger, World War Z was roundly slammed by critics before its release … but it still cracked the half-billion dollar mark at the box office, making it Brad Pitt’s highest-grossing movie.

So let’s look at it from a more businesslike point of view.

As Disney’s Dave Hollis indicated above, Lone Ranger is a classic example of what I call Extruded Film Product (EFP) — a formulaic collection of “sure-fire” elements designed to make money.

The business version is a “safe” business that may not be what you particularly want to do, but that conventional wisdom says will always be in demand. It’s your mom telling you to become an orthodontist, even though your soul cries out to devote itself to interpretive dance.

As anyone who goes to big-budget movies knows, Extruded Film Product can make plenty of money. Disney went to the press lamenting why on earth it didn’t happen this time. But it’s not that hard to figure out.

There’s a missing ingredient in bombs like Lone Ranger that successful EFP films (and businesses) have in spades. For example, Despicable Me 2 had it — and spanked The Lone Ranger at the box office.

We’ll talk about that missing ingredient in a minute, but first let’s talk about the not so sure-fire elements.

Don’t let your business become a generic me-too product. Take the time to uncover what differentiates you from everyone else who offers your product or service.

Conventional wisdom among film people is that no one wants to see Westerns any more, particularly international audiences.

And it’s not an unimportant factor. The description of “Western in outer space” probably doomed the magnificent TV show Firefly. It sounded like broccoli ice cream — something the show’s creator (the mighty Joss Whedon) was interested in, but that the rest of us didn’t really want. By the time its word of mouth caught up with a larger audience, the show was gone.

(Whedon eventually went on, of course, to turn his talents to something audiences were ravenous for — the superhero film The Avengers.)

Movies — and businesses — can make much safer bets by going with what audiences are already hungry for. Which is why “personal trainer” tends to be a safer career choice than “mole rat wrangler.”

Rango, Django Unchained*, Unforgiven, Dances with Wolves, and Butch Cassidy and the Sundance Kid were all Westerns that attracted massive audiences in times when Westerns were not especially fashionable.

What made them succeed in eras when “Westerns were dead”? They all had superb scripts that transcended the genre. They were so damned good, you couldn’t not go see them. And everyone who saw them grabbed you by the elbow and told you to go see it, too.

Make sure that customers actually have some appetite for what you have to offer. Your business might survive a “weird” product or service idea, if you’re good enough, but it’s no fun to be the next Firefly — a brilliant idea that couldn’t find its audience in time.

The handful of good reviews for Lone Ranger typically don’t say much about the script, they mostly talk about Depp’s performance as Tonto or the splendid action sequences.

Even the good reviews mention the script’s tendency to meander and its lack of structure.

Some observers predicted the Lone Ranger’s demise by observing its runaway budget problems. Why? Because:

Budgets running out of control usually mean that the film producers do not have a concrete vision in mind when they start making the film. Without a vision going forward, that usually means that whatever the movie ends up being, it effectively is the result of massive rewrites and re-imaginings. So why is this a problem? Because when that happens, the final product does not bear the same sort of effective storytelling power it would have had, had it been the embodiment of a particularly enthralling tale from the beginning.” ~ James Gadea at policymic.

In the realm of the successful blockbuster movie, the writer (despite jokes to the contrary) runs the show. Without the power of superb story, Extruded Film Product just feels … extruded.

When your business has a big idea — and tells the story of that idea in an engaging way — your audience (of customers) starts to be pulled toward you.

Know your business’s big idea. Tell your story over time, in a compelling, engaging way. We have an entire free library to help teach you how to do this.

In the end, I think The Long Ranger tanked because it ran out of G.A.S. (Forgive me, but that stands for Give a Shit — you can read this post to find out more.)

Rewrites bloated the script to an overlong, confusing mess? Never mind, audiences are too dumb to pay attention to that stuff.

Parents don’t want to take their kids to a goofy comedy that occasionally veers off into Tarantino-level violence? Don’t worry about it, nobody monitors what their kids are doing anyway.

The movie’s bland and boring? It can’t be boring, look, we put Johnny Depp in it. With a bird on his head.

I don’t fault the movie for being EFP — that’s what Hollywood produces these days.

But if you’re going to write formula, you have to care about it.

In fact, I think that’s what made this movie’s precursor (with the same winning team) — The Pirates of the Caribbean — so monstrously successful. No one was particularly clamoring for pirate movies, much less ones based on Disney theme rides.

It was so much better than it had to be, from the script to the performances to the costumes and direction. Word got out that it was good — really good. Formulaic? Absolutely. But it was beautifully executed formula.

Now your business may be a unique snowflake or you may be working in a super competitive, me-too world and fighting every day to differentiate yourself.

Both of those can work, if you can find an audience.

But you have to give it plenty of G.A.S.

Previous article: Last Chance to Save on Our Small Business Marketing Summit
Next article: Why You Should Write Short Articles, Too