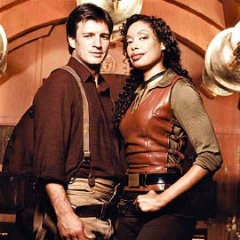 I was reading Jonathan Fields’ new book Uncertainty: Turning Fear and Doubt into Fuel for Brilliance this weekend, and one of the insights that struck me the most was his breakdown of the two types of creativity.

Because analogies help us learn, and because Firefly is the best show that has ever been on television, I’m going to call the two types of creativity Mal Reynolds creativity (insight, vision, and brave new ideas) and Zoe Washburne creativity (actually getting something done).

If you’re not a Firefly fan, don’t worry, because these archetypes are present in just about any epic story you can imagine. They’re also present in your business right now.

Essentially, part of the creative process involves having brilliant vision and breakthrough insights. And part involves refining, expanding, and producing that vision — in other words, actually buckling down and making something.

One of these probably comes easier to you than the other, but chances are that you’re going to need to be able to handle both, at least at first. So let’s talk about how to do that a little less painfully.

The Firefly character Captain Mal Reynolds is the archetype of creative leadership.

He’s brave. He’s smart. He can sum up a tricky situation in an instant, knowing when to fight off the bad guys and when to turn tail and run.

Mal is a classic entrepreneurial leader. (And a classic action hero.) He comes up with the plan that’s so crazy it just might work, and his crew works together to make it happen.

Mal is perceptive, decisive, romantic (despite every attempt to be cynical), impractical, impulsive, and brilliant.

But this type of creativity has a dark side. In Jonathan’s book, he talks about being an “idea terrorist” in his own companies.

Every two seconds, I’d have a new idea about what we were going to do, how we’d define the brand, whom we’d serve, what kind of lighting we’d have, the type of music we’d create, the people we’d hire, what they’d wear, the tiles in the bathrooms.

It’s impossible to execute when you’re facing a firehose of ideas. And whether you have staff or you’re on your own, you’ll burn your organization out if you try.

Part of the difficulty of the creative process is to sift through the thousand possible wonderful ideas, and find one to execute on.

It may not be “the” right idea. It probably won’t be. It just has to be a right idea.

Zoe Washburne is Mal’s second in command. She’s a well-trained soldier, intensely practical, and steeped in tactics and strategy. She’s also brave and smart, but her skill lies in following orders.

Some people don’t recognize Zoe’s style as being creative, but it is. It’s the Zoes of the world who literally create something, by taking ideas and vision and applying “REP” (refining, expansion, process) to them.

If nothing is created, there is no creativity

Part of what makes a creative life (and every bootstrap business is a creative project) so hard is that Captain Mals are the ones who tend to be drawn to this kind of life, but then we have to turn ourselves into Zoes to actually build something.

Vision is nothing without execution — which is why so many brilliant visionaries have a history of being shot down by “practical” thinkers before they finally make their mark.

What to do if you’re a Mal

If you’re a Mal and you don’t have a Zoe yet, you’ll need to be able to uncover your pragmatic side, at least until you can create enough success to build an organization.

The first thing you should do is pick up Jonathan’s book, because he has a lot of practical ideas about how Mals can adapt from pure thinkers to doers.

It’s very likely that you’ll take the lead on creating your content — at least until you can communicate your vision to a few Zoes who can create it for you. So construct rituals that let your brain know it’s time to be productive.

Work in focused bursts, giving yourself recovery time to recharge your creative batteries.

You’ll also want to draw clear boundaries between your “insight time” and “implementation time.” There’s a time to dream and a time to write, and you need to define which is which.

When you’re in productive mode, look for clear, step by step instruction for how to do the task you’ve assigned yourself. Keep yourself on track with roadmaps, checklists, or other linear tools that let you know you’ve done all the steps.

If you’re a Zoe

If you’re more a Zoe than a Mal, you may not think of yourself as creative at all.

Realize that your implementation of an idea is one of the most valuable forms of creativity. Ideas are cheap; implementation is priceless, so don’t sell yourself short.

Your insights may not immediately brand you as a “thought leader,” but if you focus relentlessly on what your audience wants and needs, you’ll find you can go surprisingly far.

Zoe isn’t showy like Mal is, but she has a strong, appealing personality. And you do too — so don’t be afraid to let that shine through in your content. Because you’re a Zoe, you’ll be less tempted to showboat or turn your content into an ego-fest — and your readers will be grateful for it.

You may decide you feel more comfortable joining forces with a visionary. If so, you won’t have much trouble finding brilliant minds who can’t seem to get anything done.

Again, don’t undermine yourself — your skill set is rare and valuable, so don’t think of yourself as the hired help. Instead, consider yourself the valued producer who can harness the creative “talent” and make things happen.

And don’t assume you’ll never have a breakthrough insight of your own. Look for proven ways to generate more insights — by approaching a crossroads topic, by applying an old insight to a new market, or simply by giving yourself some creative downtime for new ideas to bubble up. Again, Jonathan’s book has a lot of ideas for you.

If you’re in the teaching business

(And by “the teaching business,” I mean content marketing, online education, or any form of sales … as well as a host of other ways the digital age has made us both teachers and students.)

As we all remember from grade school, really great teachers are creative … and they respect the creativity and individuality of their students.

Your Mal students already have the vision and the drive, but when it’s time for them to put the details together, they need help. Give them lots of step-by-step tutorials. Even better, give them checklists and manuals they can hand off to someone else when they finally give up trying to do it all alone.

Your Zoe students know how to work and they know how to make things happen, but they may not have confidence that they can create something really new. Give them reassurance, frameworks for creativity, and tools to develop their ideas from blah to breakthrough.

Best of all is if you can create an environment in which your Zoes and Mals can interact, ask each other questions, brainstorm, and possibly team up to form amazing partnerships.

Make your students and customer Big Damn Heroes, and they’ll love you forever.

All of us have a mix of creative strengths, but we usually lean toward one side of the spectrum or another. Are you a Mal or a Zoe, or a different type altogether?

About the Author: Sonia Simone is CMO of Copyblogger Media and co-creator of Teaching Sells.