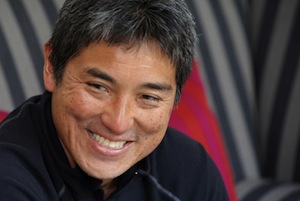 What is it? Enchantment: The Art of Changing Hearts, Minds, and Actions. It’s Guy Kawasaki’s most recent book, and it was a smash hit.

But this post is not about that book. Sorry, Guy.

Instead, this is a post about the myriad triggers that lead readers to pick up a copy of Enchantment … and about the strategies Guy Kawasaki has used to make himself one of the most likable authorities around.

This is a post about how you can make a little bit of that Kawasaki magic work for you … and it all starts with creating a stamp of approval.

Why you need a stamp of approval

Guy Kawasaki’s ventures carry a stamp of approval that catapults his books to bestseller lists before they’re even released.

Get your hands on that magic stamp, and you can catapult your own work — your blog, your product or service, your business — to heights you’ve never seen before.

I’m not going to lie to you. This takes time. Guy’s first books didn’t jump to #77 on Amazon.com — pre-sale — like his latest did, and neither will your book, blog, or business.

There’s no magic formula, but there is a formula. It’s up to you to make the results magical.

Let’s break it down now.

Guy’s (unofficial) 5 steps to gaining your own stamp of approval from readers and customers:

Believe it or not, this is the quickest step to master, because there’s only one person who can put your spin on whatever you do, and that’s you.

For the most part, readers are not looking for Earth-shattering new facts or stunningly profound insights. They want answers they can jump on-board with easily, answers that already make sense to them.

They want bite-sized thoughts, and they want you to dig deeper only occasionally. They want to absorb your ideas right away, and only take the full PhD when they feel like it.

[Guy’s] exuberant writing is addictive because he makes us feel good about ourselves, and inspires us to follow his method to guide others — whether in business, online, or every day — to think the same way about us.
~ Suzette Valle, Mamarazzi Knows Best

People have always looked for fortune-tellers, and they always will.

Why should you tell readers and buyers about a future they may be scared to face head-on?

Because in being the one who’ll stare far ahead, you gain a reputation as a leader. Because in sticking your neck out, you teach others to view the world just as boldly as you.

Because when you jump to the stage and announce that you see things in a new way, you get your best chance to sweep others up in your vision.

Insight — Connecting the dots — many people understand A, and even B, and can talk about A & B all night long, but they can’t see that there is a new entity, C, that was a result of A+B … Understanding how constant change will manifest itself is a gift.
~ Mark Lovett, Global Patriot

If you’re looking for a stamp of approval that your readers and customers will buy (and keep on buying), then look no further than social proof.

The traditional definition of social proof is a bit narrow. If lots of other people like you and say so, more people will start to like you, and buy from you, or read your work.

That’s certainly true for Guy Kawasaki. He’s become a bestseller, and his blog posts, Tweets, and books are read by tens of thousands of people, who tell tens of thousands more. It’s a beautiful word-of-mouth cycle.

But there’s more to social proof than big numbers.

Today we buy Guy because thousands of other people buy Guy. But before there were thousands, there was Steve.

Steve Jobs “bought” Guy — he made him Chief Evangelist for Apple back when Apple was more of a geek dream than the mega-business anti-hero that it is today.

You may or may not have that kind of luck, but you’ll never know unless you find some little companies (or bloggers, authors, or speakers) who believe in you right now.

Start showcasing the people who like you, even if it’s one at a time. Don’t wait until there are thousands who drool at your feet.

The beauty of having thousands of fans is that they create a second wave of social pressure — fans don’t want to be left behind by not knowing about Guy’s latest. Fans do want to hang with the fun people, to belong to the group who’s read it and put it to use and can quote their favorite lines.

If you’re old enough to remember when only those cool new sneakers called Nikes would do in junior high, then you know the feeling well.

Maybe you haven’t invented a rockin’ new type of sport shoe, but you can still invoke this feeling.

Uncover what’s cool about buying from you and emphasize it. Before there are thousands, imagine who they’ll be, and then draw them to your in-crowd — just like Guy in 1983, when Nikes were everywhere, but Apples were only a fruit you bit into.

Be your own Chief Evangelist.

As a past “Mac-head” I learned to love this Apple Chief Evangelist way, way back like 20+ years ago … and I’ve followed his career mostly because anyone that Jobs hired, had to be good!
~ Jim Rudnick, Canuck SEO

Past performance is related to social proof, but takes your work a step further.

Social proof is other people convincing new folks to give you a try. But past performance — a demonstrated history of showing up and being remarkable over time — clinches the deal.

Past performance helps people convince themselves … because despite what those financial disclaimers say, past performance very often is an indicator of future worth.

In other words, if you’ve done good work before, you’re probably going to do good work going forward. Crowing (humbly) about your past removes risk from your potential new customer’s mind.

Now there’s no doubt about it, consistency over time is going to take … time. There is no sneaky way around that. Guy began the part of his career that we usually hear about at Apple. He moved on to become an entrepreneur, a successful venture capitalist, an in-demand speaker, and the author of ten books.

If Guy wants to convince us that we’re taking very little risk in buying a copy of Enchantment, he can point to that long history. He’s not some random dude, he’s a known quantity.

His successes in guiding others convince us that he’ll provide great guidance once again with this book. When he writes about the many businesses he’s helped to launch, fund, or grow, it’s legit for him to refer to his “Golden Touch.”

We buy the past performance, we buy the man with the Golden Touch, we rush to order the book.

As you develop your history, go ahead and crow about it. There’s an old saying that every success guarantees the next.

Write about your successes, and your audience will look for a little of that success to rub off on them.

Guy has been on the front line … Real knowledge comes from doing it, owning it, admitting failure, and being able to express it in human terms.~ Mark Lovett

You could say I saved the best for last — after all, you’ve got one, I’ve got one, and Guy’s got one.

A personality. No sweat, right?

For some folks, that’s true. Some people have no problem writing, speaking, and selling with plenty of authentic verve and personality. But for many, letting that unique personality out in a natural way will be a project that will take them months or years.

And this is where Guy Kawasaki shines.

Of all the things people have mentioned about Guy, this was #1. If there were magic that I could bottle up for you, I’d be offering Kawasaki-Personality-by-the-Ounce.

It’s not magic, though. It’s comfort in his own skin. It’s an incredibly positive outlook (though Johnny Truant might say that a signature “bite” of strategic crankiness can work as well).

It’s drive and a sense of humor.

It’s being … you. You, out loud. Simple, and difficult, as that.

Word spreads fast about people with that kind of confidence, because we want to be near it and we all want to have it ourselves.

The biggest reason I think we “buy Guy” is because he’s an approachable authority. Lots of people are authorities in their niche, but it takes a special blend of authority, authenticity, and personality to be “one of the guys” without sacrificing your authority. I believe Guy has accomplished this. He’s clearly an authority on his topic, yet is still willing to engage with his audience, respond to e-mails, and build relationships.
~ Logan Zanelli

One more note on personality — don’t discount the smile.

Smile, and the world tries to give you a smile in return. It’s one more reason for your audience to stay glued to you!

Can this stuff really work for you?

Maybe Guy’s story seems a bit larger-than-life. Would you like to be able to see down the road and imagine your own results in a shorter time frame?

Well, once upon a time I started a little business. Helped out a few small businesspeople like yourself. Then, I wrote a blog about the work I do with your business and others … for 3 and a half years.

I made close friends and warm acquaintances among writers, colleagues, and clients. I reached out, I tried to surprise people, I had fun with it. And I kept it kind of low-key, because that suits me best.

Then one day I had a hankering to write a little post — and when I got halfway through, I knew it was a gift for you. I asked my friend Sonia what she thought, and she liked the idea.

I asked all sorts of folks I know, who know Guy and have written about Enchantment, if they’d offer a few words or a sentence on my quickie “interview.” I asked some folks I don’t know, too, and I hoped that I’d built up enough of a reputation over time that they might volunteer some great ideas.

They overwhelmed me with their amazing insights (thanks, everyone!), and today I get to give some tips on getting a little of Guy Kawasaki’s magic.

Sure there’s magic in his personality, but each of us has a little of our own magic.
~ BL Ochman

This post isn’t really about Guy Kawasaki, or about Enchantment. It’s about you … about the step you’re going to take today to create the stamp of approval needed so people will buy you.

So which step appeals to you to start with? Let us know in the comments.

The Genesis Framework from our StudioPress division empowers you to quickly and easily build incredible websites with WordPress.

With search-optimized code and functions, 37 turn-key designs, and unlimited support, updates, and websites you can build, Mashable calls Genesis the “best of the best” among premium WordPress theme frameworks. It’s no wonder over 46,465 online publishers trust Genesis to provide a solid foundation for their sites.

Whether you’re a novice or advanced developer, Genesis provides the secure and search-engine-optimized foundation that takes WordPress places you never thought it could go.

Find out more about StudioPress here.