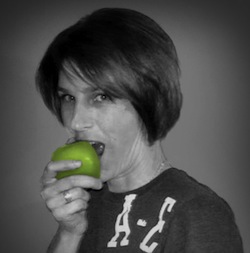 My name is Johnny B. Truant.

You might know me from stimulating enterprises such as The Badass Project or my own infamous blog, or maybe even the Copyblogger Weekly Wrap.

What you might not know is that I’m a woman.

This is not a joke or an angle or an analogy — I’m literally a woman.

This is my story.

Once upon a time, I found myself having to make some hard decisions.

With hair like that, you could command any kind of sandwich you wanted.

I know that sounds like an odd thing to think about — and an odd thing to introduce my coming-out post with — but you’ve got to understand that just about every major event in my life has revolved in some way around facial hair, and my own inability to grow it.

You know, since I’m a woman.

Growing up in rural Quebec, scraping by on my father’s salary as a union Zamboni lubricator, it didn’t take me long to learn the ugly truth about the world.

See, my father had a testosterone deficiency that kept his face perpetually smooth of whiskers. And despite working all the overtime he could (including a scab gig harvesting bamboo during the 1981 Montreal wicker strike), he was always the lowest man on the totem pole.

While other men with grand beards supported their families in luxury, we were reduced to wearing Salvation Army Hammer pants and subsisting on grainy crêpes and old brie.

And like my father, I was out in the cold. Literally. He couldn’t grow a beard in the winter to keep his face warm and neither could I, earning us the condescending nickname “rosy cheeks.” At least, I’m pretty sure that’s what espèce d’imbecile means in French.

I had talent, intelligence, perseverance, and moxie — but it seemed that what was required to make it big were mustaches, beards, sideburns, goatees, soul patches, and fu manchus. You could raise some eyebrows by doing extraordinary things, but the handwriting was on the wall — you couldn’t make any true progress without the ability to grow an epic beard or an awesome mustache.

Others were occasionally smooth-faced … but you knew from looking at them that they could explode into an epic beard if it were required — in a fight-or-flight-or-beard scenario.

I mean, just look at Colin Farrell. If you tried to attack him, he’d just turn around and grow his beard at you, and the explosive growth would blow you into the wall.

I was tired of having no beard, no five-o-clock shadow, no stubble, and no threat whatsoever of growing something on my face that I could fashion into a windmill to win a contest.

I’d always had to fight and struggle and dig, but now it was time for something to change.

So I became a man (In name and beard only)

I was fresh off another rejection (“How could you have perfected cold fusion? You don’t even have a beard!”) and angry. It was maddening to not be able to convey my reckless nature by showing up to meetings unshaven.

I was registering domain names and getting hosting for a new blog I had in mind, but even as I did it, an insistent part of me said,

What’s the point? Everyone can see that you’ll never even have mutton chop sideburns. They’ll never watch your videos if they know they’ll always see a clean face.

And then I realized: I could be a dude.

This was the internet … I could be anyone

And if I were a guy, nobody would know that I’d been beardless all my life. Nobody would know about my chapped cheeks in January and the fact that the only shaving I needed after a week camping was on my legs.

People would assume that on any given day, I might have stubble or a mustache or a giant ZZ Top beard. And I could tease about it, casual-like, mentioning things like needing a shave and finding a few gray hairs in my beard.

And the best part? I wouldn’t even present myself as having a beard or a mustache. That was too obvious and too easy.

Instead, I decided I’d be a beard tease. A Colin Farrell. I wouldn’t show a huge beard or dominating mustache … but who knew what I’d have on my face from day to day?

That first blog was a niche site, and it quickly fell apart. I wrote posts like “10 Reasons Why Your Obsolete Beard is Holding You Back” and “How to Use Your Beard in Social Media.” I ranked #1 for coveted SEO phrases like “giant beard parsnip Ewok,” but in practice, it meant nothing. The site stagnated and then disintegrated.

The beard agenda took a back seat, and the irony was palpable. I had become “Johnny” to use facial hair to my advantage, but it wasn’t mattering. People knew I could grow a beard if I wanted, so they didn’t care if it ever actually happened.

Slowly, I became “just Johnny.” Still a man, but without a beard. I eventually met Brian, Sonia, and Jon of Copyblogger, none of whom have beards, and we hit it off instantly.

“It’s amazing how far you’ve come without a beard,” I remember Sonia telling me on IM. “We thought we were the only ones who’d been able to make beardlessness work.”

I’d broken into the Good Old Beard network and it hadn’t even mattered.

The metaphorical emperor had no clothes. But now I was stuck; I had become a man and now I would have to remain a man. So I kept it up. Kept telling my fart jokes. Kept talking about business.

And so it went.

So what happens next?

I’ve proven my point. I have no facial hair, and yet I’ve done pretty well for myself.

My life, my terms. No one handed me anything. I’ve worked damned hard for this. I took care of myself, my family, and my desire for an epic beard. I’ve given the best of my facial-hair-related creativity and knowledge to each of my clients and readers.

About the Author: Johnny B. Truant is an accomplished businessperson who specializes in selling through stories and is the proud creator of The Badass Project, a site profiling amazing people who make your excuses look stupid.

Previous article: How to Get More Clients, Money, and Respect for Your Copywriting Business
Next article: The 4 Words That Will Get Your Email Opened