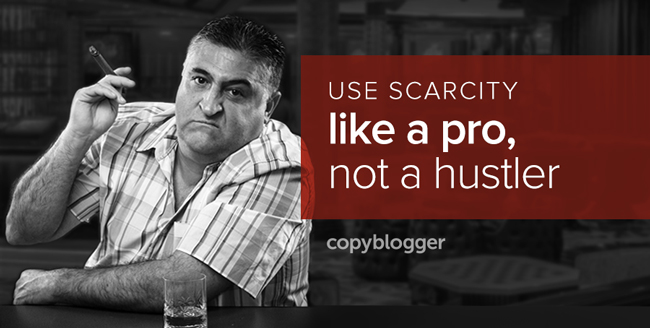 Let’s be honest with each other for a moment.

Both you and I know we are lazy when it comes to activities that don’t appeal to our self-interests. We stall. We resist. We ignore.

This is not a bad thing, mind you. In fact, it’s necessary. We do it to protect our limited resources. You and I only have so much time, energy, and money.

As digital marketers, however, with products we wish to sell, we need our audiences to overcome their resistance to taking action.

I love this line by Sonia Simone that perfectly sums up the situation we face:

You could have a product that granted immortality, robust health, unlimited wealth, and a lifetime of great hair … and people would still put off adding it to their carts.

First, you need to acknowledge that this resistance is a problem.

In a previous article, I talked about a common problem I see on landing pages, particularly when offering free opt-in content.

This problem is that when a product is free, many writers believe that they don’t have to offer much copy to their prospects. They think the word “free” will do all the work.

That’s simply not the case. You are asking “free” to do too much.

But there is another common problem I see when evaluating landing pages. It has to do with calls to action.

Of course all the pages I review have calls to action. I think we’ve impressed that principle enough on people that it’s become a convention.

But a standard call to action lacks power if it lacks a sense of urgency. A sense of scarcity.

At this point, two questions may be crossing your mind.

To answer your questions: no, you don’t have to make something up, because, yes, that is shady.

In our effort to be known, liked, and trusted, we can’t lie in order to line our pockets.

And spin it any way you want, manufacturing scarcity is lying. Eventually you’ll be found out. And your short-term gains will lead to a long-term scarcity of customers.

That’s not the type of scarcity I’m talking about.

The return of FoMO

If you think about it, scarcity is just another species of what is known as Fear of Missing Out. It works on our brains in the same way.

Here’s the impact of what scarcity does to the mind.

A study published in May 1998, “Get’ em While They Last! Effects of Scarcity Information in Job Advertisements,” showed the number of application entries a company received from help wanted ads that listed how many job vacancies were available, as well as company image perception.

I think you probably know where this is going.

So you might expect more applications to flood Company B. Yet the contrary happened.

People flooded Company A with applications because they made two assumptions about the company (whether or not they were indeed true):

People interpret a company that has only a few positions available as highly sought-after employment. It suggests people really love to work for this company and don’t want to leave (perhaps they pay well).

By the way, these were positions for a restaurant server. Not some slick job at a Silicon Valley empire.

Another principle at work: social proof

The job advertisement example above is one version of social proof. It’s not the most common.

A common form of social proof is the long line of people running out of a restaurant and snaking its way around the corner. Without knowing anything else about the restaurant, you will assume that it’s popular, and if it’s popular it has to be good, and so you join the end of the line.

This is not unlike the practice of displaying (once it reaches a massive milestone) how many people have subscribed to your email newsletter, joined your training course, or bought your product.

There is power in a “Join a million+ breath-taking readers” message.

Social media shares are yet another example of social proof.

A quick look at the social shares on an article will help us decide whether or not to read it. We may ignore an article with two shares, but if there’s one with 14,000 shares? We screech to a halt and investigate.

But the true — and crazy — potential of scarcity can be seen when a whole heck of a lot of people want a very limited supply of an item.

One of the most visible examples of scarcity at work in the minds of consumers occurs on a Friday. After Thanksgiving.

Consider the conversation going on in the head of a typical Black Friday consumer:

“Tomorrow Best Buy has Xbox One consoles on sale.”

“Yeah, for nearly a quarter of their normal price.”

“Our son really, really wants an Xbox One. His love for us would never end if we got him one for Christmas.”

“Yes. We need our son to love us for a very long time.”

“But there’s a problem.”

“Best Buy probably only has 40 of these consoles available.”

“And 1,000 sets of parents with the same thought on their minds as us.”

“Are you thinking what I’m thinking?”

“You get the tent. I’ll grab the brass knuckles.”

And so, how do you recreate that scarcity effect in a legitimate way?

You can recreate a legitimate sense of scarcity by creating competition among participants.

For example, I used to work for a guy (whom I love dearly) who would pound his desk and tell me, “Tell them how many people we are sending this offer to.”

So a line in my email would read:

By the way, I think it’s only appropriate to tell you that we are sending this limited offer to 24,545 other people. In other words, if you are the least bit interested, act now. Tomorrow might be too late.”

Add a refund policy, and we never had any problem moving product.

The impact that higher prices can have on the human psyche is interesting. For example, in Robert Cialdini’s book Influence, he tells the story of a jewelry shop for tourists who sold all of their items after raising the prices.

But the price raises were actually done by mistake.

The owners were going out of town, and they told the person watching the shop to lower the prices. She misunderstood and raised the prices. Tourists, under the assumption that high prices meant a scarce product, scooped up everything.

Keep in mind, these are people with money who want to spend money. Let me explain why this is important.

In a study published in 1992, “Product Scarcity by Need for Uniqueness Interaction: A Consumer Catch-22 Carousel?,” researchers discovered a relationship between a phenomenon known as Need for Uniqueness (a deep sense that we need to stand out from others) and product scarcity.

In summary, this need drives us to seek out those scarce products that promise we will achieve and maintain a sense of specialness.

So, in the Cialdini example, the tourists were looking to spend money to satisfy that high Need for Uniqueness because you know they wanted to go back home and show off their newfound treasures.

The other day, Jerod Morris and I had a good laugh over the fact that I’ve never been invited to any type of mastermind group. I guess I’m not mastermind material. Not that I’m complaining.

Some mastermind groups use a special form of scarcity that makes those groups more exclusive. Think of a millionaire’s club. You can’t join unless your income exceeds one million dollars a year.

Then there are the clubs for billionaires only. Where the big kids play. With their vintage car collections. On their private islands.

Top-notch universities keep the general population at bay through tough entrance exams. But that still doesn’t keep thousands of people from wanting to pay $45,278 a year for undergraduate tuition at Harvard.

Strict requirements don’t only have to be for items you are selling. You can use scarcity and exclusivity for free membership sites. Here’s the one I love to hate: Beautiful People.

In order to be accepted, those already inside must vote you in. Talk about intimidation. If accepted, though, you then become one of them — the beautiful people.

And you can brag about it.

Scarcity also works on our desire to want something even more when we are told we can’t have it.

Once we’ve made a commitment — even a very small one — we don’t like to be told we can’t have something. Our half-baked pledge turns into a hellbent determination when somebody suggests we don’t measure up.

In some cases, this takeaway could be as simple as pouring on a ridiculous amount of value so the reader sees a better version of herself that she really wants and then saying, “You know what? This might not be for you. I don’t know if you are actually willing to do x, y, and z. I’ve seen it so many times. People say they want these changes, but they are not willing to do x, y, and z. ”

5. Pull it off the market

A variation of “The Takeaway” is pulling your product off the market.

Let’s say you offer a limited window of time for joining a training course — and then pull it off the market when the deadline arrives. That closing window of opportunity will get people off their duffs and pulling out their wallets.

They don’t want to wait another six months for you to re-open registration.

While your product is off the market, you can encourage people to join a waiting list with the promise that they will be the first to be notified when the offer becomes available again.

6. Make a product so irresistible that demand goes up

Finally, you can create scarcity by drumming up good, old-fashioned demand for your product.

I love the economic concept of supply and demand. My father, a trained economist, used to instruct me and my sister on this idea using stick rabbits on a chalkboard in our attic.

We — two blonde, boney kids — giggled until he got pissed.

But that lesson stuck with me. And now I jump on every chance I get to teach this to my own kids.

Now it’s your turn. The concept is simple.

The last bullet point above is the freelancer negotiating sweet spot — or the sweet spot for anyone in the service industry (where you trade your time for money).

Naturally, you are probably wondering: what’s the best way to increase demand?

Become a purple cow. And once demand exceeds supply, don’t seek to correct that gap.

A powerful way to get people to act

Scarcity is a powerful way to get people to act. Often, though, marketers manufacture scarcity and lose trust with consumers.

This is the scarcity sweet spot.

Now that you’ve gotten a little lesson on scarcity, you should be able to spot examples out in the real world.

Previous article: 5 New Ways to Take Your Pinterest Marketing to the Next Level
Next article: The One Irrefutable, Universal Law of Podcasting Success