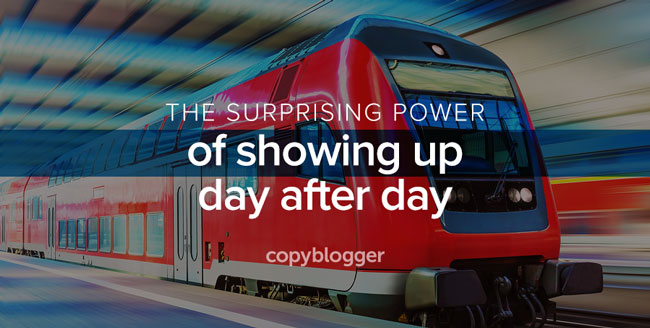 There is no secret to podcasting success. There is just this:

Show up reliably over time.

It’s the battle for audience attention — that grueling war of attrition in which attitude always triumphs over aptitude.

Which is why the rewards are so great for those who stick it out.

Marc Maron has produced 614 episodes of WTF since he launched the show in September 2009. On Monday, he interviewed the President of the United States.

The latter does not occur without the former.

Marc Maron shows the hell up.

Demian Farnwoth has published four new episodes of Rough Draft every week since launching in mid-March of this year. He already has 60 5-star reviews in iTunes.

Jonny Nastor has published three new episodes of Hack the Entrepreneur per week since launching in September 2014. He already has 253 5-star reviews in iTunes.

Demian Farnworth and Jonny Nastor show the hell up reliably.

I have hosted a live postgame show immediately after nearly every Indiana basketball game since the beginning of the 2011–12 season. There are now more than 1,000 people on our email list, a handful of whom donated money to our show before we ever asked for any donations.

I show the hell up reliably and have done it over time. So have my co-hosts.

And because Marc Maron starting showing up, he got better at developing authentic connections with his guests and his audience.

And because Jonny and Demian have shown up reliably, they have become regular, trusted sources of usefulness to their audiences.

And because my co-hosts and I have shown up reliably over time, we are projecting our little hobby podcast to drive five figures in revenue next season.

The constant? Showing up.

It’s what most people won’t do

Half of all podcasts never make it past the 7–10 episode range. Most of the rest are done by episode 20–25.

Only podcasters with a certain attitude and perseverance prevail — a fact that can empower and frighten simultaneously.

Are you up for the challenge?

There is one irrefutable, universal law of podcasting success:

Show up reliably over time.

It isn’t easy — few accomplishments worth achieving are. But it is simple.

If so, then you’re a Showrunner …

In fact, you are a Showrunner.

So we want you to join us. You can start with The Beginner’s Guide to Launching a Remarkable Podcast.

The free ebook is a guide to getting your podcast off the ground.

It follows the framework mapped out inside The Showrunner Podcasting Course. Yet, at the same time, it is a standalone guide to getting started today.

Get your free copy:
The Beginner’s Guide to Launching a Remarkable Podcast

Let’s do this together.

Previous article: How to Use Scarcity to Get Lazy People to Act (Without Being Shady)
Next article: Launching a New Product? These 5 Tips Will Get You the Testimonials You Need