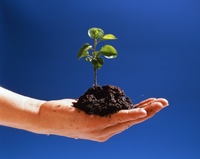 My friend Tom thinks I should create a how-to product on “writing for the paralyzed and confused.” He’s a very creative and articulate guy, but writing kills him. Knocking out two pages can take him hours. And when he’s done, he second-guesses himself for a couple more hours about whether it’s any good.

Since I don’t have a spare month right now to create a complete information product for you, here’s a blog post to get you started. A step-by-step guide you can use to write as many blog posts as you need, without tears, frustration, or brain damage.

People think that writing is a magic skill, because you’re creating something valuable out of nothing. But it’s actually more like gardening. Begin with a given set of resources (in this case, ideas and a little time), learn the right way to put those resources together, and you’ll grow something good.

Getting in the mood to write generally comes from having an interesting idea you want to expand on. Every time you get the seed of a post idea, even if you’re not sure it will work, plant it right away by capturing it in a system. Even noting a single sentence fragment will help.

I’ve mentioned before that I use the 37 Signals product Backpack to keep post ideas and reference materials together, which works extremely well for me. A commenter on this blog suggested something even simpler–just create a draft post in WordPress. You can do it from anywhere in the world, and you can keep growing it bit by bit until you’ve got a full-grown post that’s ready to publish.

2. Make sure you’ve got soil, water and sunlight

Every writer has different basic needs. (And no, none of us needs a Tuscan villa with a glass of Barolo and views of vineyards. We might like one, but we do not need it.) You’ll have to experiment to find what works and doesn’t work for you, but until you know your own basic needs as a writer, you’ll never be able to work easily and in flow.

You probably need some privacy. Some writers can work in cafés, but the mental energy you spend tuning other people out would probably be better used on improving your ideas and the rhythm of your words.

You need ideas that excite you–that’s what your seedling system is for.

You need to work without distractions or interruptions. Turn off your email program. Power down your iPhone. Close your Twitter app. Shut the door and put up a do-not-disturb sign. If you have to lock yourself in the bathroom to get interruption-free time, do that.

Even 15 or 20 minutes can produce good work, especially for a short piece like a blog post. Lately I’ve been working in 50-minute sessions, which is terrific. The key is to find any uninterrupted chunk of time at all and defend it.

The easiest way to start growing the post is to write 3 or 4 subheads that expand on your basic idea seed. More may come to you while you’re writing, which is just fine.

When you’ve got some subheads captured, if you don’t feel like writing any more on that topic, put it aside. Save the post as a draft, or capture it in Google docs, or whatever you do to keep work in progress. The boys in the basement might need to do some more work with that particular set of ideas.

Or you may find that you’re ready to start writing a few paragraphs. You don’t have to start at the beginning. Just jump in wherever feels right, and write 2-3 paragraphs per subhead.

The post might start to coil off in some crazy kudzu direction you never intended. That’s fine. Keep writing. If the new direction isn’t any good, you can prune it out later and no one will ever know.

(But don’t throw those snippets away. Keep your rejected clippings somewhere and look through them every once in awhile. You might find they’ve composted into good stuff.)

Thinking about writing is like thinking about planting, watering, and weeding. Sure, creative noodling time can make your writing better. But noodling is not writing. Wii, Twitter, Solitaire and long walks in the rain are also not writing.

During your writing time, write. Noodling time is separate. It’s nice when you can noodle right before you write, but sometimes you don’t have that luxury. Noodling will happen on its own, so when you’re putting your priorities together, put writing time first.

A lot of what you write will be awful. Please understand that every writer you admire produces a lot of garbage. Cultivate what Anne Lamott calls the “shitty first draft.”

In fact, try to write as horribly as you possibly can. Break all writing rules. Use lots of clichés and redundancies. Be trite. Write about stupid ideas. Insult your readers. Make no sense. Make simple ideas as complicated and obtuse as possible.

If you can’t find the right word for something, or a particular word or phrase just bugs you, [put it in brackets] and come back to it later.

Assuming you can hold a conversation with another person (or yourself in the shower, for that matter) about a topic that interests you, there is no reason you should let writing tyrannize you. Blog writing is just a conversation, with the added benefit that you get to cut out all the parts that make you sound dumb.

If the act of actually writing is slowing you down, start talking and see what comes out. (This is partly why you want some privacy. Talking to yourself aloud in a café might get you some odd looks.)

Keep talking and writing. Fill in all of your subheads, and maybe some new ones if you come up with any. You’re allowed to delete subheads that don’t prove productive. Do this all at once, or in separate sessions. Keep as many posts going as you want, in as many stages of completion as you want. Different posts grow at different rates.

Ever grown an apple tree? If you never have, you might assume that you stick it in the ground, water it every once in awhile, and the thing just makes apples.

But an apple tree needs to be pruned and shaped every year. Diseased and dead wood needs to be cut out. Healthy wood needs to be cut away, too, to encourage the tree to grow in the right shape. Some of the apples need to be removed, so the rest of them grow up into beautiful red shiny images of apple perfection.

Take your saved draft and start pruning. (Remember, you can cut ruthlessly because you’re saving your clippings for the compost pile.)

Figure out what the main idea of this piece is. It might be a very different main idea than the one you started with.

Cut everything that doesn’t fit that main idea and throw it on the compost pile. Or briefly go back to step 1 and plant those ideas to grow into new posts.

All those clichés and stupidities you indulged yourself with can go now. They’ve done what they needed to do, which is to loosen you up and keep you from paralyzing yourself. A few of them will actually be pretty interesting and cool. You’ll keep those, or spin new posts off of them.

Pruning can take a long time. I spend two to three times as much time shaping posts as I do drafting them. For me, pruning works best when I do it a little at a time. Take a pass and cut or fix stuff that doesn’t work, then let the post rest. Take another pass later this afternoon, or tomorrow.

Writing, like gardening, doesn’t end until you do. There will always be new ideas you’ll want to grow. The more you write, the more ideas you’ll get.

You are not an air traffic controller

If you write a post that’s not very good, or that people just can’t get into, the world will not come to an end. No one will be maimed or die. No innocent puppies will suffer.

The only one who will really be bothered by it is you, and that’s optional.

As a gardener, if you keep yourself busy enough, failures aren’t a big deal. In fact, failure is an interesting data point. “Hm, all my potatoes rotted this year. Maybe that soil’s no good for potatoes. Or I’m overwatering, or I got a bad batch to start with.” Think of some different ways to try potatoes next spring, and move on.

Along the same lines, successes are delightful, but they don’t make you a genius. There is no Nobel prize for gardening. Great harvests make you proud and they’re fun to consume. You might even win a prize for the biggest pumpkin in Schenectady. But you don’t get a giant head about it. You’re too busy putting up new flats of seedlings.

Smart gardeners plant more of what worked well last year. The particular conditions of your garden will be better for some crops than for others. Do more of what works, and less of what doesn’t.

Since gardening is a metaphor that can be extended to a degree that is both ridiculous and sublime, I’ll leave it to you. Have you found something about the rhythms of blogging that reminds you of gardening? Tell us about it in the comments.

About the Author: Sonia Simone is an Associate Editor of Copyblogger and the founder of Remarkable Communication.

Previous article: Are You a Writer?
Next article: Top 10 Blogs for Writers 2008