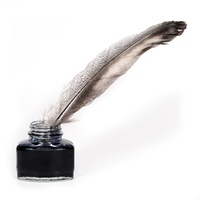 I’m a writer. I spent over three decades unaware of this essential truth, but I’m ready to atone for my ignorance.

For some reason, it never mattered that I’d been reading at least a book a week since my eyes could string the syllables together.

I could never be a writer.

Writing, I believed, was a spectator sport for me. I imagined the process as long, tedious, and certainly not something I was capable of. I pictured the lone man, tugging on his beard and banging on his typewriter; a single swallow left in a tumbler on the table, waiting as reward once the thread of inspiration had been pulled from his mind.

That’s not me. I’m not creative.

This was the constant whisper of a lifetime. Omnipresent and no more irrefutable than, “I cannot fly.”

I wish I knew the moment this changed, but becoming a writer has been less like the bloom of childbirth, than the process of pregnancy.

People have wanted stories since they were painting them inside their caves. This desire is what’s kept The Illiad and The Odyssey alive for so long. And it isn’t just belief in God that keeps the bible breathing.

The first time I put pen to paper (just last year), I found myself with a short story; a yarn so terrible that if now found, it could discredit me forever. But, as Dr. Suess said, “Everything stinks until it’s finished.”

That short story (about fifty pages) swelled into the first draft of my first novel. Every day, I gave it more of my voice, but just as you can’t stretch your tee-shirt a week after you start lifting weights, I was far from turning into Shakespeare overnight.

But I’ve been at it for a year, and I’ve written quite a lot.

I’ve launched a blog that’s done very well in it’s short life, and in three months, I’ll be trading my old life for a new one as a full time writer.

It’s not what I expected, but it is what I was born to do.

I’d always believed that I wasn’t very creative, or at least that what creativity I did have, didn’t run too deep. But I’m alive, and that means I know a good story when I hear one. A writer need not worry that his ideas will thin. Our minds only empty at the end of our final breath.

It’s a lot of work, and you’ll spend a lot of time in the edit if you want your words to sing, but the only way to be a writer is to sit down and start moving your pen across the paper (or your fingers across the keys), fueled by the knowledge that you have everything it takes.

So yes… you’re alive, so you’re a writer.

Previous article: What Jergens Hand Soap Can Teach You About Crafting Compelling Copy
Next article: How to Grow a Blog Post in 7 Easy Steps