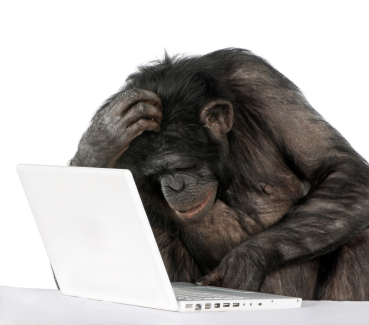 Writing can be really no-win. It’s not fair, but it’s true.

You make one mistake and a lot of people will let it go. Two and you’re making them suspicious. Keep that up, with your intelligence taking hits at each turn, and your reader will decide that you’re actually a chimpanzee — and not one of the smart ones, either.

Copyblogger has covered grammar nicely here and here and here. But I, as a newcomer to these parts, have a few more peeves to add to the pot. Ignore them at your peril, Bubbles.*

1. Improper use of “myself”

This is one that people make because they think that complicating the language needlessly will make them sound smart.

(It’s the same principle as a barely literate inner-city tenant telling me haughtily that her brother is “presently incarcerated in a corrections facility.”)

Here’s a typical incorrect use:

“The committee will consist of Bob, Mr. Parsons, and myself.”

In this circumstance, “me” is the right choice. In general, “myself” is a word you shouldn’t find much use for, so if you’re using it a lot, you’re probably using it wrong. “Myself” should only be used reflexively, to refer back to the subject.

This is extremely common, and I can almost forgive it because the correct structure is cumbersome. Here’s an example of a disagreement:

“Clearly, this person didn’t know what they were doing.”

The problem is “this person” (singular) being used together with the pronoun “they” (plural). “These people didn’t know what they were doing” is correct, and so is “This person didn’t know what he or she was doing.” In each of those cases, the number (singular or plural) in the subject agrees with the number in the predicate.

Number disagreements are irritating to solve, because if you have a bunch of them and are writing about a hypothetical or unknown person, your copy ends up being overrun with awkward “he or she’s.”

A good compromise is to pick a gender and run with it. The standard used to be to assume any unknown person was a man (e.g. “This person didn’t know what he was doing”), but it’s more common today to use “she” as the universal pronoun. Alternatively, you can alternate “she” and “he” in different instances throughout your copy.

(If you’re confused on this, try substituting a person’s name in the subject. This tends to make things more obvious. Using the initial example, you’d come up with, “Clearly, Bob didn’t know what they were doing.” Assuming you know that “they” is supposed to refer to Bob and not to another group, this becomes obviously wrong.)

I always get argument on this one, but I’m going to put my foot down anyway. Not only is putting “an” in front of a word with an audible H grammatically incorrect, it’s also uncommonly annoying.

Chalk this one up to trying to sound intelligent, like the “myself” rule above. Somehow, users feel that the use of “an” in this clunky way makes them sound distinguished, kind of like adding ye olde in front of tanning parlor, or saying indubitably with an English accent.

If you’re bristling at this one, ask yourself if you’d say, “an horse” or “an house.” What would people think if you went into the store and said, “I’ll have an half gallon of milk, please”?

You can and should use “an” if the H is silent and the word starts with a phonetic vowel, like “an hour.” Otherwise, go with “a” as the article.

Everyone makes this mistake, so don’t beat yourself up if you do. But you should also fix it.

Here’s the incorrect use:

However, the correct choice here would be were, not was.

Were here would be correctly used in the subjunctive mood — a case in which what you’re saying is hypothetical. If you’ve used “if,” that’s a pretty good indicator that were is appropriate:

(You’re not me, so it’s subjunctive)

“If I were at work right now, I’d be eating a waffle.”

Remember, you use “were” because you’re actually not at work right now. But if you were writing about an actual past event, you’d use “was” (e.g. “When I was at work”).

5. Incorrect use of “literally”

Please don’t do this with a straight face. Not only will you look uneducated, you’ll also look absolutely hilarious.

Example: Kristen Stewart from the Twilight movies recently told a reporter, “I get to do something that literally if I didn’t get to do it, I would implode.”

Now, think about that for a second. If Kristen couldn’t act, she would actually collapse in upon herself like a black hole. I’d like to see that.

I collect “literally” mentions. Britney Spears has been “literally on a roller coaster to hell.” Crowds have “literally turned the city upside down.” And in a particularly grisly turn of events, a mall Santa reported that needy, sad children “literally tear his heart out.”

Whenever you use “literally,” stop and think about whether or not what you’re saying is actually true, in those exact words. If it’s not, use “practically,” “essentially,” or (ideally) “metaphorically” instead.

If there’s one thing you don’t want to be, it’s accidentally hilarious. Seriously, trust me on this one.

* “Bubbles” was Michael Jackson’s chimp. What, have you forgotten already?

Are you a grammar wiz who also has a strong writing voice?

Do you know how to craft a powerful headline? How about insightful, persuasive content that delivers on your headline’s promise? Then you might be a match for our Content Marketer Certification program!

It helps you position your business for greater success. And if you earn a Certified Content Marketer badge to display on your website, prospective clients see that you have the training they’re looking for … and they’ll feel more confident hiring you.

If you’re interested in learning more, add your email address below to get all of the details when we reopen the program to new students.

We’re all busy, and we all make mistakes

That combination is problematic when you need to present an effective piece of writing right now, whether it’s an email, a blog post, or a proposal for a client.

At Copyblogger, we want you to be taken seriously as a writer, so we’re an affiliate of Grammarly, a writing resource that optimizes your chances of looking like a pro.

Click here to learn more about Grammarly, a tool for serious writers.