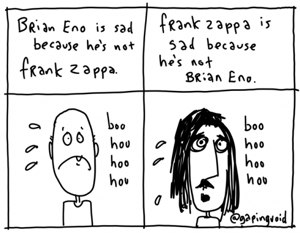 Two of my favo­rite artist heroes are Brian Eno and Frank Zappa, two musi­cians who first hit the big time about forty years ago. I was first tur­ned onto them in my late teens.

Both became tra­di­tio­nal rock stars around the same time, Eno pla­ying with Roxy Music, Zappa with The Mothers Of Invention.

They could have done what most rock stars do: Make a cou­ple of records, get a cou­ple of hits on the radio, spend the next X decades tou­ring, living on a tour bus, pla­ying the same songs night after night to ado­ring fans in towns in Cle­ve­land, Chi­cago, Des Moi­nes, Little Rock …

And yet they chose not to, after only a cou­ple of years in the lime­light. Both were highly inte­lli­gent, visio­nary peo­ple, and no matter how attrac­tive the sex-drugs-and-rock-n-roll thing can be to young peo­ple, the typi­cal rock n’ roll lifestyle was boring and infan­tile to them.

Their music star­ted get­ting more and more classical/avante-garde/out-there. And now, four deca­des later, they’re titans, res­pec­ted by the smar­test and most inte­res­ting dudes in the busi­ness. Poor ol’ Zappa died a few years ago, but Eno is still thri­ving, and still cons­tantly evol­ving, doing inte­res­ting work.

I guess their les­son taught me that, just because you’ve found the stan­dard win­ning for­mula, doesn’t mean your thing has to stay for­mu­laic; that allo­wing your­self to re-invent, evolve and push out your edges into unk­nown terri­tory is not just OK, it’s essential.

At least, it is if you want to keep things interesting.

The other thing they taught me? It’s OK to be weird, it’s OK to be smart, and it’s OK to shun com­mer­cia­lity, even if you’re a rock star. Just because all the idiots are doing it a cer­tain way, doesn’t mean you have to, as well.

And so I try to incor­po­rate that into my own work … and you can too, even if you’re not an artist or a rock star, even if you have a nor­mal job.

Hugh MacLeod is lead artist and co-founder of Gapingvoid, a management consultancy that uses art to transform business. Clients include Microsoft, Roche Pharmaceuticals, Rackspace, and Zappos. He blogs over at hughcartoons.com. Follow him at @hughcartoons.

Previous article: 12 Ways to Connect, Create, and Collaborate Using Google Hangouts
Next article: A Real Simple Solution to the Death of Google Reader