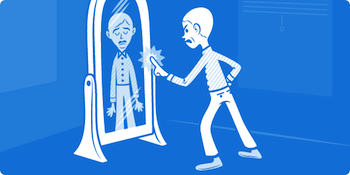 What would you do if you discovered that the secret to your success online lay in firing yourself? Would you do it?

That’s the question Alex, a freelance copywriter, had to face.

Alex started his copywriting business three years ago, after the local newspaper he worked for as a staff writer was shut down.

From the get-go he scrambled to pick up writing jobs, tapping his network, searching freelance websites, and sending query after query.

Opportunities soon began to open up for him, and he took every single one.

Let’s take a look at the specifics of his story …

His clients were businesses and solopreneurs of all types and sizes. Little start-ups, a big bank, neighborhood shops, a medical clinic, a solar power plant on the other side of the world.

With his take-any-client-with-a-pulse approach, he managed to keep the work flowing for the next three years.

In fact, many times it flowed too heavily, and he would log long hours, day in and day out.

Falling out of love with your business

The concept of a weekend soon became a distant memory.

Alex eventually got worn out and fell out of love with writing. At that point a mutual acquaintance suggested that he give me a ring.

A few weeks later Alex squeezed in a call with me while on the road. He said he wanted to start enjoying his work again, which probably required working less and somehow making more money.

After he gave me the rundown of his business, I told him he could easily have what he wanted, but he needed to step back for a few days to develop a business plan, decide on some goals and objectives, and map out a few specific strategies.

He told me he didn’t have the time for that.

He was running his feet off trying to keep up with everything on his plate.

Why you should fire yourself

“Alex,” I said, “if you sincerely want to work less and make more money you should consider firing yourself.”

I heard a long pause on the other end of the line, before, “Uh … what exactly do you mean by that?”

Working in the business means doing all the day-to-day stuff, such as servicing clients.

Working on the business means stepping away from the daily grind to do some planning and strategic thinking.

The trap of being a small business owner

It’s a trap, because without planning and strategic decision-making, the business can suffer, and so can the owner. In his case, Alex had hit a revenue ceiling and an emotional low at the same time.

For many, the trap is hard to get out of because, if they’re on their own, it’s up to them to do all the servicing. They feel they can’t stop, but if they don’t stop, nothing will ever improve.

I told Alex I saw so many ways for him to improve.

Both of those things had made him woefully inefficient. If he specialized in some industries, and if he concentrated on his higher-value services, like content development, instead of getting bogged down in things like product descriptions, he could easily make more money in less time.

But figuring out what industries to target and how to transition out of low-paying work would require some high-level creative thinking.

And you can’t just do that when you’re caught in the daily grind, worrying about all the work you have to do for your clients.

Hire yourself as CEO to save your business

You have to totally get away from the day-to-day stuff — in every way, including emotionally. You can’t have any worries about the business.

You have to think about it objectively. After all, the right way forward might mean dropping a client you really like.

You’re not going to do that if you’re in the headspace of the guy involved with the client.

Another pause. “I’m pretty sure the CEO would be worried.”

I agree. But give him a chance to figure out solutions. He won’t, however, just think about how to get the business through the next week.

As CEO, he’s going to do some long-term planning. And he might make some hard decisions. One of them might be what to do with the copywriter he’d just let go.

But I imagine he’ll think you’re doing a pretty good job. So he’ll probably hire you back, with perhaps the insistence you get some work-life balance going.

Alex said the idea had some appeal to him, but he was seriously worried about finding the time and the emotional distance.

I suggested he do what he could to make the time, even if it meant turning down a little work. It might be hard, but the CEO in him would understand.

How to refocus your business and regain your sanity

Alex would eventually follow my advice. He booked himself a weekend getaway at a cottage, took a business planning kit with him, and worked all weekend as CEO.

One of the decisions he made was to focus on the healthcare industry. Both his parents were medical professionals and he had a personal interest in health, enjoyed the work, and felt it was a growing industry.

He also made a hard decision to stop taking certain types of work, as well as any work below a certain pay rate.

Oh, and he decided to hire himself back as the copywriter.

Alex would stick to his CEO’s decisions, though he often had to fight the fear that turning down work was a bad thing.

His persistence would pay off, though. Two years later he became an established, high-paid writer in the healthcare industry.

For the most part, he stopped working crazy hours and he was much happier.

Make sure to think completely objectively about your business, and be prepared to make hard decisions. Push yourself to think creatively and strategically.

You’ll probably find being CEO fun and rewarding. You get to be the big shot, for a little while at least, before you head back to the grindstone.

A good rule of thumb is to fire yourself for a day or two every quarter.

Going on a retreat, like Alex did, is a good idea. And you don’t have to do all the planning alone. Consulting a business-minded friend or working with a professional can be well worth it.

Author’s note: this post is based on a business owner I’ve coached. I’ve changed his name and any telling details.

Donald Cowper is the Small Business Writer at FreshBooks, the #1 Cloud Accounting Software for Small Business Owners. He's a successful entrepreneur, an experienced coach, and the coauthor of two bestselling business books. Check out The Cowper Files for more great small business stories and tips.

Previous article: How to Write Interesting Content for a “Boring” Topic
Next article: 7 Ways to Write Damn Bad Copy