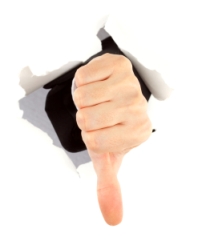 The life of a freelance writer is pretty sweet.

It’s interesting, challenging work. You meet great people. You have a lot of freedom to organize your work life the way you want it. The pay can be excellent, and you get to make a living doing something you love.

But there are aspects of the profession that aren’t much fun.

As a freelance copywriter, you need to get professional about how you deal with the parts of freelancing that aren’t unicorns and rainbows. Today, I’m going to talk about how to handle one of the more irritating hassles in the life of a writer: Requests for rewrites.

Rewrites are inevitable in any writer’s life. No matter how brilliant you are, no matter how strongly you wield your pen, eventually someone somewhere is going to absolutely hate that first draft you sent in.

And they’re going to ask that you rewrite it.

Rewrites are not revisions

First, let me clarify one distinction.

A rewrite is not the same thing as revising what you wrote or tweaking the copy to be just right. Most freelance writers offer a certain number of revisions per project for free — usually one or two at most. And those rounds are based on an assumption: the client likes the first draft, but wants to tweak a few things.

Even if your client loves that first draft sideways, they’ll wind up asking for a few minor changes:

I actually prefer to be called a coach, not a consultant. Could you fix that?

I’m not sure I like the way you describe me in the About page. Could you take out these adjectives and put in other ones?

I love what you’re saying, but I think this technical point needs to be clearer. Here’s how it really works — could you change that paragraph?

You’ll notice something about most of those tweaks. They’re things you couldn’t possibly have known. No matter how thorough your initial information-gathering phase might have been, some little details slip through the cracks.

Often they’re details that the client never realized were important — until he saw them in his copy.

Revisions are easy fixes. You can usually knock them out and send back a perfect final version before you finish your first cup of coffee.

Rewrites are a whole ‘nother animal

A major rewrite can really mess with your confidence. They can be terrifying, because you have absolutely nothing to go on. When the client asks for a rewrite, it’s usually because he wants you to scrap everything you’ve written and start over.

The way they wanted to be presented probably hasn’t really changed either. They still want their customers to think of them as a professional with years of experience who knows the ins and outs of the trade. Or they still want to be presented as a caring, nurturing type who can make all the woes of life go away.

The facts have not altered.

It’s the way you present those facts that needs to go.

You’re going to need to start from scratch. And that’s hard for a few reasons:

One: You already thought you had a good grasp of what the client wanted, or you wouldn’t have written the copy that way. Clearing your mind and starting over with a whole new perception is going to be tough.

Two: You’re probably feeling hurt or stung. Rejection sucks, and being told your writing wasn’t even close to right is painful. You’re not exactly in the mood to try to please this client again.

So how do you deal with someone who wants a complete rewrite?

I usually send a hit man. Solves the problem and it’s no work for me.

Actually, usually the best thing to do is take a break. Take deep breaths. Try to remember that the client is just as disappointed as you are and that they deserve the copy they were hoping for.

Try to remember it isn’t personal. It’s useful to look at it as a misunderstanding. The client thought they communicated what they wanted. You thought you understood it.

You were both wrong.

So, go back to the computer and write a nice, calm, apologetic email. Ask them to clarify a couple of points for you so you can write a draft that is more to their liking. Use the feedback they gave you — even if it’s couched in angry terms — to get the questions.

You said this copy ‘doesn’t sound like a lawyer.’ Could you explain what gave you that impression so I can avoid that mistake in your next draft?

Be calm. Be apologetic. After all, you’re half to blame for the miscommunication. If you’re understanding and sympathetic, that client isn’t going to be upset at you for long. In fact, he’ll get over it as soon as you give him the rewrite.

The rewrite that’s so kick-ass the client can’t believe it, because you made doubly sure this time that you understood just what he was going for.

What if you can’t please him no matter what you do?

Politely refer him to another writer that you think might suit him better.

At a certain point, this person isn’t going to be happy even if you hand him the Gettysburg Address of website copy. He might have better luck elsewhere, and sending him to a good alternative may be the best thing you can do for him.