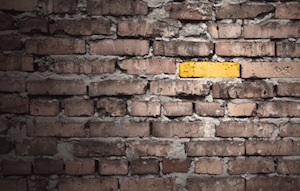 What if you’ve got something going for you so remarkable that it virtually guarantees your success?

What if you’re just not seeing it?

Every business needs a remarkable benefit (or USP) in order to stand out from the competition.

Identify that unique element, and you’ll know exactly what the theme of your content marketing should be, because that will be the big story of your business.

The fact is, often that extraordinary element is something you take for granted.

Back in the 1920s, Schlitz was the number five brand in the American beer market. The company hired now-legendary copywriter Claude Hopkins to do something about that unenviable position.

The first thing Claude did was tour the facility where the beer was brewed.

He was shown how the beer was cooled in a special way that eliminated impurities. He saw the expensive white-wood pulp filters. His hosts told him that every pump and pipe was cleaned twice for purity, and each bottle sterilized four times before being trusted to hold Schlitz beer. He saw the 4,000-foot well that supplied the water, despite the fact that nearby Lake Michigan would have provided an otherwise acceptable source.

When Hopkins asked why Schlitz didn’t tell their customers about all of this rigorous attention to purity and quality, the response was “Every beer company does this.”

“But others have never told this story,” Hopkins replied.

Within months of the “new” story, Schlitz went from 5th place to a tie for first in the market.

Let’s face it … it’s hard to get excited about fruit cake. So when copywriter Gary Hennerberg was hired in 2002 by the Collin Street Bakery of Corsicana, Texas (just south of Dallas) to help boost sales of the seasonal treat, he discovered that taste tests proved that people enjoyed the product, but despised the name.

So Gary did some digging, and discovered that Collin Street had some bragging rights in the ingredient department. The bakery used Texas native pecans in their cakes — pecans that grew next to a river or stream on small farms — instead of commercially-grown pecans.

Gary knew he had a story, and he wanted to see if it would help Collin Street Bakery increase their sales. He keyed in on how rare the pecans are to tell a compelling tale.

From majestic pecan trees native only to a handful of Texas rivers and streams, soaring up to 150 feet in height and canopy, planted by mother nature as long ago as the Civil War.

These are just two examples of the dramatic difference the right story can mean to a business.

And if you’re marketing your business with quality, relevant content, it’s absolutely critical that your editorial strategy be organized around that unique story.

As content marketing becomes mainstream, the early-adopter advantage is gone. I’d argue that we’re already past that point.

But there will always be room at the top for that remarkable story. Often, all you need to do is examine what you’ve already got going for you with a fresh perspective.

So … what’s your hidden remarkable benefit?