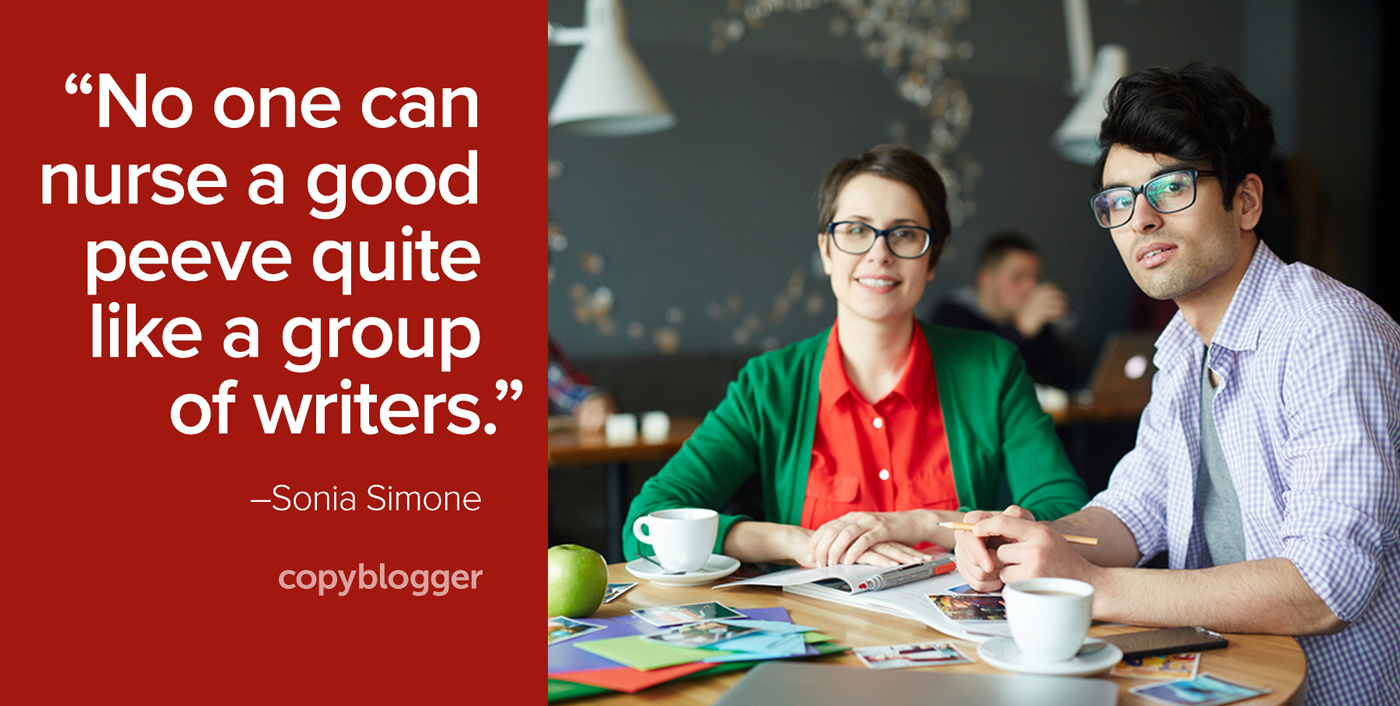 We’ve written quite a bit lately about identifying core values in your content.

Creating content around a positive value like integrity, fairness, humility, or faith will attract an audience that shares those values — and that fosters a powerful sense of unity.

But our friend negativity bias tells us that the flip side of that will probably be more compelling. In other words, talking about the things that bug you will build an even faster bond with your audience.

For today’s post, I asked our editorial team to let us know their peeves — the things that irritate, bother, and annoy them.

I’m going to try to tease those out and figure out the values behind them — and see what that might say about who we are as a company and a community.

So let’s get peevy.

Stefanie is our editor-in-chief, and as you’d expect, she has a healthy list of grammar and usage peeves.

But an editor is much more than a proofreader. It’s one thing to misplace a comma — it’s another to come at a post in a fundamentally flawed way. Here’s Stefanie’s peeve:

Hype/extremes/absolutes: Writing voices that are heavy on absolutes tend to simultaneously lack substance and speak to the reader as if they know what’s best for them … which isn’t a combination that builds credibility.

For example, earnestly referring to any flesh-and-blood human being as a “guru” is typically too vague or a sign of hype. If the person is an expert, top scholar, or highly respected professional, use those labels instead — they’re more specific.

Putting this post together reminded me that an Allergy to Hype has always been at the core of Copyblogger’s message. Since Brian founded the blog in 2008, Copyblogger has always stood in contrast to the hype-slingers who substitute flash for value. We believe that substance matters.

Ten-dollar words: This is an old one, but a good one, and for good reason. Most writers have moderate-to-severe mental problems. I am, obviously, no psychologist, but the attempt to unnecessarily project one’s “intelligence” through the use of big words — when plain words can do the job — seems to be clear evidence of this.

Besides the obvious fact that Robert wins a lifetime “get off my lawn” achievement award, I think this shows how passionate we are about Quality. Quality of information, quality of business practices, quality of writing.

You’ve only seen Loryn on the blog once (so far), but she’s crucial to our editorial success. She’s the data analyst who looks at the numbers behind what we’re writing, and helps us to get our message out more effectively.

Using “over” with numbers (instead of “more than”) : As Rainmaker Digital’s data analyst, this one comes up for me a lot. Every time I catch myself writing “over 5%…” in a report, I go back and change it to “more than.”

Now, the Associated Press said in 2014 that both “over” and “more than” are acceptable to use with numeric comparisons — as in, “There were over two hundred people at the event.” But you know what? It still bugs the crap out of me.

In my mind, “over” mixes the abstract world with the physical realm. For example, if you were to say, “We flew over 6,000 miles …” you could be saying that you flew more than 6,000 miles. Or, you might mean that you were literally above the earth for 6,000 miles.

I picked this one precisely because the team doesn’t agree on it. Some of us are “more than” folks (me, Loryn) and some aren’t. Stefanie tries to remain agnostic.

While it can be fun to give in to that eye twitch when someone makes a style choice we don’t like, I think it’s smart to keep some perspective. There are usually good arguments to be made for different usage choices, so I’ll go with Diversity as a value for this one.

My take is that it’s more important to be thoughtful about your choices than it is to be didactic. Although alot is never going to be a word and you can’t make it one.

Jerod’s a person with a strong moral compass, and I was interested to see his peeves. Here’s the one I chose from his:

Misspellings of names: It’s especially bad when the name is a common one that’s misspelled in an obvious way. But any name misspelling shows a lack of basic respect for the subject you’re writing about. It’s not really grammar, but it still makes me cringe. Find out for sure.

Misspelling a name in content is a classic example in failure of what Jerod calls Primility (the intersection between pride and humility). It’s both sloppy (lack of pride) and disrespectful (lack of humility). I think it’s fair to say that Primility is a core value for Jerod, and that’s probably one of the reasons he’s been such a great asset to our company.

We are, make no mistake, proud of the work we do at Copyblogger. We love producing the blog, and we try hard to make it excellent. But we know that humility’s important, too. We’re under no illusion that this blog is perfect, and we try to challenge each other to always make it more relevant, more useful, and more interesting.

You may feel like you already know more than you need to about my peeves. For today, I revisited a favorite:

When I see a site with a genuine, passionate voice — even if there are a few usage errors — I may cringe a little, but mostly I cheer. I’d much rather see a site with plenty of G.A.S. than a grammatically perfect one that has no soul.

Individuality is absolutely a core value at Copyblogger. We’ve never endorsed the paint-by-numbers approach to marketing and online business … partly because that would be very boring, and mostly because it just doesn’t work.

And then there’s the Oxford comma

If you aren’t familiar with the Oxford comma (also known as the serial comma), it’s that final comma in a collection of items in a sentence.

Here’s a visually amusing example of the same sentence with and without one.

I like the Oxford comma because it’s always clear. Jerod gets downright fierce about his support. That renegade Loryn, though, has come to prefer dropping it.

“I used to be a staunch Oxford Comma advocate, but now I prefer the way short lists flow without it.” – That Renegade Loryn

Either is correct, but do be consistent. (Although the late Bill Walsh, noted Washington Post usage stickler, advises that if a serial comma is important for clarity, go ahead and put one in there, even if it’s not your usual style.)

A note about peeves and unity

I mentioned when we started that talking about the negatives will build a connection with your audience more quickly — and it will. But keep in mind that a steady diet of negativity will give almost anyone indigestion.

Don’t shy away from talking about the good stuff, too. An honest values system includes both positive and negative points of view.

What sets your teeth on edge when you see it in a blog post or hear it in a podcast? What do you think that says about you and your values?