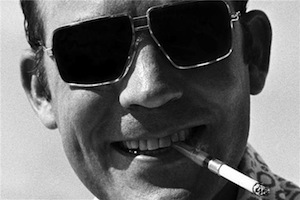 Are you one of them?

One of the thousands — maybe millions — of faceless web writers toiling away on content that immediately slips into obscurity?

Are you doing what you love for something you hate? Feeling used — even abused — because you are not getting credit for your work?

It’s like a page out of a science fiction novel where people aren’t known by a name, but merely a number.

But your situation is actually worse, because you don’t even have a number. You’re just given an order for 500 words, and enough money to buy a wind chime. Wind chimes are nice, but they don’t put food on your table — let alone substitute for a mortgage payment. You have to write about twenty of those 500-word posts a day to earn an honest living.

You want more when it comes to your writing career. Right?

And you want a little bit of attention or encouragement … because anonymity sucks.

Fear and loathing in SEO copywriting

And that’s what the general context for SEO copywriting has been for a while. Companies who want to rank high and build links clamor for content, hiring web writers by the dozens to grind out keyword-rich posts.

Who cares who you are? It’s all about production …

Can you knock out fifteen posts on birth defects by this afternoon for $20 a pop? Do good work and I’ll have fifteen more assignments for you.

Oh, stop it. I’m swooning over my luck here.

If writers are running the show, nobody told the vendors — or Google, for that matter. In fact, it’s like Google wasn’t even listening.

But yet, they were. Google was always listening, because they knew great writers created great content.

But how to create an algorithm that made the writer the central character of the show? Could it even be done? And how would this help search (Google’s core business function)?

Google finally answered these questions with a thoughtful, yet somewhat meandering, strategy that culminated in their latest algorithm Author Rank.

I’ll tell you more about this algorithm (and how it can impact you as a writer) in a moment, but first I want to tell you a story.

Hunter S. Thompson had a pretty typical start as a writer.

A childhood rocked by his dad’s death and mother’s alcoholism … a string of eliminations from jobs that didn’t really matter … a few jobs that did matter … a stint in the air force that ended after it was recognized that “although talented, [this airman] will not be guided by policy.”

As a young adult, Thompson drifted from coast to coast trying to be a writer. But it didn’t seem like anybody was paying attention.

Perhaps his journalism was second-rate, and his short stories third. Possibly his former bosses were justified in canning him — maybe he simply didn’t have the kind of talent that prima donnas need to possess in order to stay employed.

He went on to change the face of journalism.

Before Thompson, journalists sought to report on events with a cool and calculated attitude — like a paid assassin. Leave your emotions, personality, and opinion at the door.

“Just get me the story,” was the journalist’s motto.

This is sheer speculation, but I imagine the rabble-rousing Thompson asking, “Why? Why do I have to be cool and calculated? Why do I have to park my personality at the door? Why can’t I be a central part of the story?”

Those questions could have been what led him to invent Gonzo Journalism.

How Gonzo Journalism and Author Rank are related

Thompson achieved national recognition with his book Hell’s Angels (in which he embedded himself with the motorcycle gang for a year), but it was “The Kentucky Derby Is Decadent and Depraved,” an article published in a small-town journal, that gave birth to Gonzo.

The article was more about the corruption surrounding the race than the actual race, but it was the manic, first-person style that characterized his Gonzo style.

Bill Cardoso of the Boston Globe said about the article:

This is it, this is pure Gonzo. If this is a start, keep rolling.

Soon after that Thompson cemented his reputation with Fear and Loathing in Las Vegas — an exhausting tale of extensive drug abuse (particularly Thompson’s and his lawyer’s), but a top-notch example of gonzo journalism.

True, Thompson’s personality was all over the page of any story he wrote, and he often confused fact with fiction — but that’s what you get with a Thompson story. The writer was the central figure of the story.

And if Hunter S. Thompson were alive today, I would like to think he would applaud Author Rank (Google’s new algorithm) because it makes the writer the central character of content …

He would’ve loved it, because it means that the writer finally does run this show.

Outside the base-level fears we have (staring at the blank page or sounding stupid, for starters), we writers also contend with a high-level set of fears like dying in obscurity, never being validated, or someone else claiming credit for our work.

See, we writers really don’t ask for much. Anneke Steenkamp summed it up with this tweet:

@demianfarnworth I want to feel proud of what I created, and if it’s awesome I want others to see it too. 🙂

But that will never be the case if the writer is anonymous. You could create 100 masterpieces on the topic of birth defects, but if nobody knows you wrote it, what’s the point?

And this is why Google’s new algorithm — Author Rank — should be applauded by all writers (not just Hunter S. Thompson). Google is going to put the writer front and center by making the historical quality of an author essential to ranking content.

To help prepare for this brave new world of content marketing, I’ll be running a series of five posts on Author Rank in the coming weeks. I’ll cover the significant developments (five in all) that have contributed to Author Rank — and how you can make the best use each of these developments to maximize your work and improve your visibility online.

It’s a story that’s worth following, particularly since it’s all about you.

Previous article: 64 Google+ Content Strategies [Infographic]
Next article: 6 Ways to Find an Audience that Hangs on Your Every Word