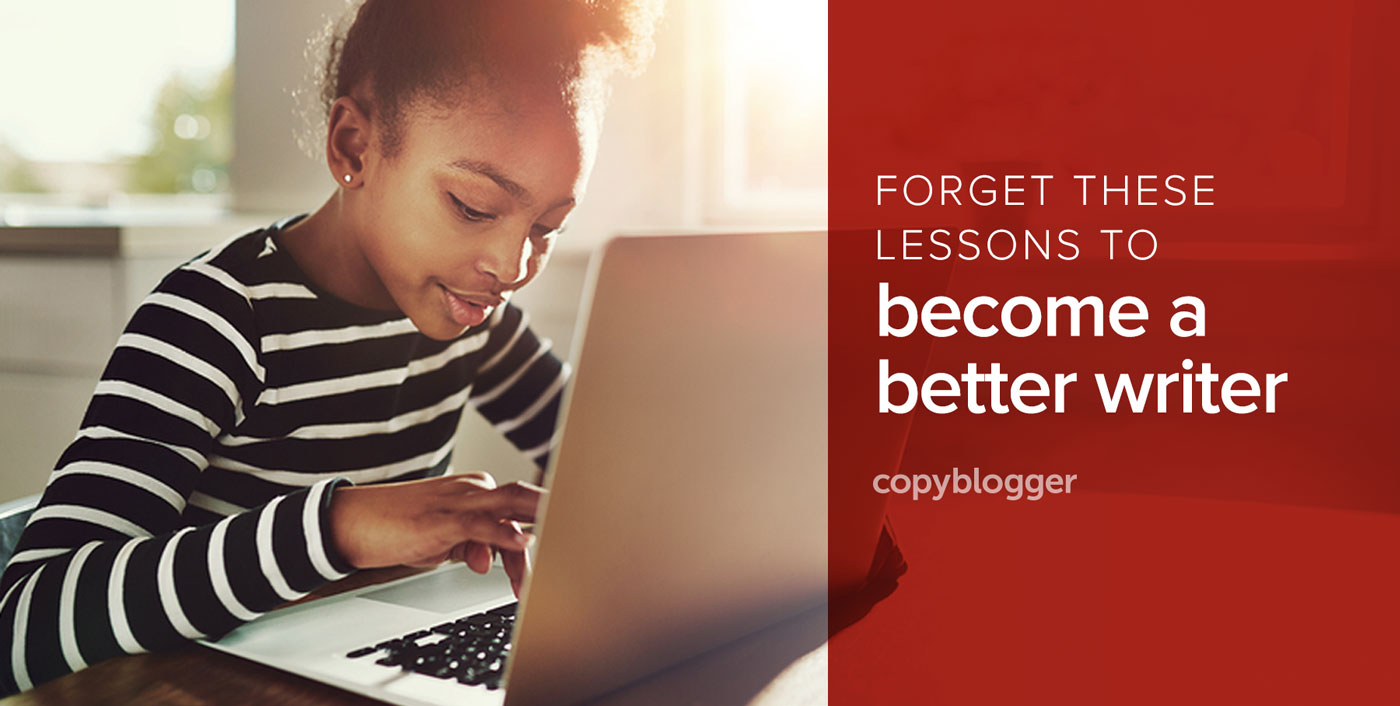 What is good writing?

Maybe, if they’re really honest, they’ll admit it has a scholarly tone — prose that sounds like Jane Austen earns an A, while a paper that could’ve been written by Willie Nelson scores a B (or worse).

Not all English teachers abide by this system, but the vast majority do. Just look at the writing of most graduates, and you’ll see what I mean. It’s proper, polite, and just polished enough not to embarrass anyone. Mission accomplished, as far as our schools are concerned.

But let me ask you something:

Is that really good writing?

I think most good writers listen to the way English teachers want them to write and think, “This isn’t real. It has no feeling, no distinctiveness, no oomph. You’re the only person in the world who would willingly read it. Everyone else would rather chew off their own eyelids than read more than three pages of this boring crap.”

Compare an award-winning essay to a best-selling novel, and you’ll notice that they are written in almost completely different languages.

Some of it has to do with the audience, sure. It’s natural to write differently for academics than you would for everyday people. But my question is: who are you going to spend more time writing for?

My guess: everyday people — your family and friends, your blog audience, your boss at work, maybe even a Letter to the Editor every now and again. None of them are academics. None of them want to read an essay.

Personally, I think good writing doesn’t have to be educated or well-supported or even grammatically correct. It does have to be interesting enough that other people want to read it.

Much of what comes out of high schools and universities fails this test, not because our students are incapable of saying anything interesting, but because a well-meaning but flawed academic system has taught them a lot of bad habits.

Let’s go through seven of them.

It’s a sad state of affairs when the youngest writer on your reading list has been dead 100 years, but that’s the way it is in school.

I don’t know who exactly decides what’s worth reading and what’s not, but they (whoever “they” are) believe in reading the “classics,” and most of those classics are centuries old. What’s worse is that many teachers hold up the classics as examples of what good writing is, and they expect you to mimic those writers with your essays.

Sure, Chaucer and Thomas More and Shakespeare were the stud muffins of their day, but you don’t see them on the New York Times Bestseller List now.

Not because they aren’t good (they were freaking great), but because people can’t connect with them. By mimicking their style, you might make a few teachers happy, but you’re essentially handicapping your writing in the eyes of the public.

If you want to make a connection, you’re much better off studying hot writers like Stephen King, J.K. Rowling, and Seth Godin. Watch what they do, and play with using some of their techniques in your own writing.

2. Expecting someone to hand you a writing prompt

Looking through the eyes of an educator, I can see why telling students what to write about would be useful. You have a bunch of students who couldn’t care less about your curriculum, and making them write a paper about the assigned readings is a great way to force them to read the material.

Makes sense … but it doesn’t make it any less damaging.

One of the biggest challenges of writing is figuring out what to write. Whether you’re writing a memo, an article, or a letter to your mother, the process is always the same: you start out with a blank page, and you decide what to put on it.

Sure, that involves considering what your audience will want to read, but no one but you makes the final decision of what to put on the page. That act of deciding is what writing is all about.

Once upon a time, it was acceptable to write paragraphs long enough to fill multiple pages with big blocks of text.

Not surprisingly, that’s the way most of us were taught to write: long paragraphs, topic sentences neatly organized, lots of supporting evidence in between assertions. It was the “correct” way to write.

Nowadays, most paragraphs should be a maximum of three sentences. It’s also a good idea to include some shorter paragraphs with only one or two sentences, using them to punctuate powerful ideas.

It’s not so much about having a “correct” length as using paragraphs to give your writing rhythm.

4. Avoiding profanity at all costs

I admit it; this is a controversial one. Many excellent writers still hold that profanity has no place in professional publications, while others feel comfortable using curse words occasionally.

The rest of us sit around wondering whether it’s okay to express ourselves “that way” or not.

Most kids I knew hated digging up sources and quoting them in their papers, but not me. No, the sneaky little bugger that I was (and still am) realized that sources were an escape route from creativity. With enough quotations from other writers, I could fill up an entire paper without coming up with a single original thought of my own.

And I was rewarded for it. From kindergarten to getting my degree in English Literature, I got an A on all but like five papers.

Here’s why: a lot of teachers care more about solid research than original ideas. They don’t want to see daring and inventive arguments challenging the foundation of everything we hold to be true and arguing boldly for a new worldview.

To them, it’s much more important that you understand the ideas of others and be able to cite them in MLA format.

But real life is the opposite.

Go around citing the sources of all of your ideas and people will start avoiding you, because it’s boring as hell. They don’t care who said what, and they aren’t interested in hearing the chronology of an idea.

What they want to hear is a new perspective on a favorite topic.

We are taught that good writing puts the focus on the subject, not the writer. It’s unemotional. It gives equal attention to opposing points of view, presenting them all without singling out one as best.

And sometimes, it’s true. If you’re a scientist, engineer, or a doctor, then maintaining your role as a detached observer is a great idea. For everyone else though, it’s a disaster.

Have you ever read the stuff scientists, engineers, and other so-called “detached observers” write? It’s boring! Outside of their exclusive circles, you couldn’t pay people to read it.

If you want people to want to read what you write, then you should do the opposite. Be more like Oprah Winfrey or Gary Vaynerchuk. They are opinionated, have a unique style, and are prone to emotional outbursts.

It’s no coincidence. That’s what makes them interesting.

7. Listening to “experts” more than yourself

Who am I to criticize the writing habits you learned in school?

Yes, I’m a professional writer. Yes, I have a literature degree. Yes, other writers have paid me up to $200 an hour to edit their work, and they’ve been amazed when all I did was correct the above mistakes.

But that doesn’t mean I’m right. In fact, that’s probably the most important lesson you can learn about writing:

No one but you is an expert on your writing.

Not me. Not your English teachers. Not Strunk and White and their highfalutin Elements of Style.

The longer you write, the more you’ll realize that other writers can’t tell you what to do. You should listen to more experienced writers, sure, but never more than you listen to yourself.

Great writers don’t learn how to write by sitting in writing courses, reading writing blogs, or browsing Barnes & Noble for yet more books on writing.

They learn how to write by coming to a blank page, writing something down, and then asking themselves if it works.

If it does, they keep it. If it doesn’t, they don’t. Then they repeat the process until they finish something they feel is worth publishing.

Sadly, most writers don’t know this

They labor under the mistaken assumption that there is an invisible standard of good and bad. And they worry that the Writing Police are going to show up at their door any minute, handcuff them, and haul them off to jail for failing to measure up.

If that was true, you wouldn’t see a single writer walking the street without one of those blinking bracelets around their ankle.

The truth is that you’re in charge. You. The blank page is sitting there, and you can fill it up with whatever the hell you want.

So stop sitting there, silly.

Editor’s note: The original version of this post was published on October 28, 2009.