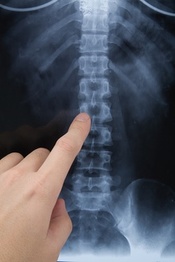 Have you ever sat for what seemed like hours, writing and rewriting, trying to communicate an idea, but you just feel… lost?

You write a paragraph, only to decide that’s not what you really want to say. So then you rewrite it to something you’re reasonably happy with, but then you can’t figure out what comes next.

You sit there thinking about it for awhile, becoming increasingly frustrated with yourself. Finally, you just walk away, trying to find some perspective, but when you come back, it seems like your ideas are even more muddled than before.

Every writer has been there. Some call it writer’s block. Others say they’ve lost their “creative direction.” Personally, I think the best description is from the famous choreographer, Twyla Tharp, who says it’s not about words or creative funks or being blocked at all. It’s about finding the one unifying force that guides your piece from start to finish:

What Is a Creative Spine?

The idea of creating a skeleton for your writing is nothing new. The headline is the head, this sub heads are the arms and legs, and the paragraphs make up the bones, flesh, and everything else. It’s a good metaphor, one that describes the process of bringing an idea to life on the page.

But what about the spine?

Our spine is probably the most important bone in our body. Without it, there is no movement, no sensation, no life. If you ever started writing and then suddenly felt paralyzed, it’s probably because you lost your creative spine.

People like to use words like “spine” and “backbone” to describe morality, strength of character, and resolution. That’s not what we’re talking about here. What I’m referring to is finding the anchor for your idea; the answer to the ever present question of, “What are you trying to do here?”

Let’s go through some examples to show you what I’m talking about.

Harnessing the Metaphor (The Descriptive Spine)

We’ve talked a lot about metaphors here at Copyblogger, and for good reason. If you can come up with the right metaphor to describe something that you readers are having trouble understanding, they are going to remember it (and love you for it) for a long, long time.

But metaphors are also a great spine.

If you’re feeling a little lost with your post, try inventing a metaphor to describe exactly what you’re talking about, and then wrap the entire blog post around it. Don’t try to be clever. Just figure out a way to describe something that gives your reader a different perspective.

Answering “Why” (The Explanatory Spine)

Have you looked at the Popular Posts in the sidebar of Copyblogger lately? Currently, my post, Why No One Reads Your Best Blog Posts (and What to Do about It) comes in first. I’d like to take credit for it, but really, the power comes from the Explanatory Spine.

If you want a recipe for a great blog post, take a subject that vexes your readers and explain it. Unravel the mystery. Not only will you be helping your readers, but you’ll probably get lots of links from other bloggers that appreciate your insight.

I’ve noticed that, whenever I have trouble writing about a topic, it’s usually when I’m trying to explain the nuances of how something works. It’s too theoretical, and I forget how to get from one point to another. Some writers I know call it “getting lost in your own head,” which is a perfect way of describing it.

I change the headline of my post to How to [Subject of the post], and then I write a series of subheads outlining the steps of exactly how to do it. And you know what? It works like gangbusters every time. If you can put what you’re writing into a series of steps, it’ll make your thinking and writing more complete.

Have you been by Zen Habits lately? If anyone is a master of the Categorical Spine, it’s Leo. Almost all of his posts are structured as lists, rattling off one point after another until he’s finished with the idea. Leo is also one of the most prolific and popular writers on the web. It’s no coincidence.

If you can structure your blog post into a series of points, you’ll find that writing is a lot easier. You no longer have to find a graceful transition from one idea to another. Coincidentally, most blog subscribers love list posts because they are easy to scan and pick up a few quick tips. Lists are the ultimate bite-sized content.

Righting a Wrong (The Argumentative Spine)

Here’s another one of my personal favorites. Whenever I’m stuck for a good blog post idea, I just think of something that everyone believes that’s obviously wrong. Then I imagine I’m writing my blog post in response to that perspective. The contrast between the two ideas serves as the spine for the piece, and it makes it remarkably easy to write.

Just to be clear, the point isn’t to stir up controversy; it’s to bring clarity to your ideas. By positioning yourself against an enemy, it becomes easier to map out what you really believe. If your post comes off as argumentative, consider going back to soften the tone. Nobody likes a blogger who’s always on their soap box.

How to Find Your Spine

Whenever you find yourself struggling, it’s probably because you haven’t found the spine of your post yet. Here are some tips that might help you:

If it sounds like a lot of work… it is. Still, it’s worth every moment when you finally stumble onto your spine. Your words just fly onto the page and finishing the blog post is next to effortless. It’s not because you suddenly found your talent. It’s because you finally know exactly what you want to say.

And that isn’t just half the battle. It’s pretty much all of it.

About the Author: Jon Morrow is an Associate Editor of Copyblogger and co-author of Keyword Research for Bloggers.