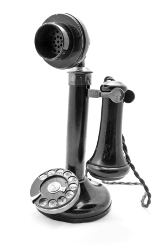 Ever heard of Innocenzo Manzetti?

How about Elisha Gray?

Okay, how about Alexander Graham Bell?

Of course you have. He invented the telephone. (Yes, that’s what that funny-looking thing above is.)

According to a growing body of research, Innocenzo Manzetti created the first working telephone in 1864, more than a full decade before Bell. But he never did anything with it.

Elisha Gray also invented a version of the telephone, and he even filed for patent, but it didn’t do any good. He arrived at the patent office a full two hours before Bell, and eventually filed a lawsuit claiming Bell stole the idea, but it never went anywhere.

In contrast, Alexander Bell spent the next several years fighting to win his patent application, raise money from private investors, and evangelize his invention. A decade later, he had more than 150,000 customers, and it no longer mattered who invented it. Bell was reaping the rewards.

The moral of the story?

The obvious one is that the only way to truly defend your ideas is to take action, but there’s another moral too. It’s much more subtle, and in my opinion, more relevant to what we are doing online.

It has to do with being what I call an “idea pack rat.”

Are you an idea pack rat?

I know I am. In fact, I’m pretty much the king of idea pack rats.

On my computer, I have folders stacked inside of folders, all of them stuffed with notes on ideas that I plan to pursue. I have outlines for unwritten books, marketing plans for products I never got around to creating, and half-written posts that I can’t seem to finish writing.

Of course, it’s a lie, one that all idea pack rats have conditioned ourselves to believe. Then we’re horrified when some ass has the same idea, and they actually have the nerve to do something with it.

Suddenly, the idea we were so carefully hoarding is worthless, and we feel robbed. Almost like someone snuck into our head and stole it.

I’ve been there. I’m guessing you’ve been there too. And, in 2010, I think it’s time we finally did something about it.

How to change the world

Alexander Bell didn’t change the world by coming up with an original idea. Innocenco Manzetti did that.

Alexander Bell didn’t change the world by taking action and getting to the patent office first. Elisha Gray beat him by two hours.

No, Alexander Bell changed the world by hitting the road with his idea, telling anyone who would listen, all the way up to the Queen of England. He used the buzz to land investors, build a company, and get people to buy telephones across the globe.

He understood that what matters isn’t who thinks of an idea first. It’s not even who takes action first.

It’s who spreads the idea the farthest.

We writers often delude ourselves into thinking that we’re making progress by publishing a daily blog post or jotting down an outline for a course or writing a book. We are taking action, and we think that’s all that matters.

You can write blog posts from now until doomsday, and if no one reads them, you might as well be picking your nose. You can write a book that would make Shakespeare green with envy, but you’ll never become a bestseller until someone reads it. You can envision making millions from selling a how-to course, but you’ll never make a dollar until you convince someone to be a customer.

The secret to changing the world isn’t you having good ideas. It’s getting those ideas into the heads of other people.

Instead of waiting for popular bloggers to discover you, email them a link to your best post and tell them why it’s important that they link to it.

Instead of dreaming about writing your autobiography one day, publish your story as a guest post for a popular blog and see how people respond.

Instead of begging venture capitalists for seed capital, make a few prototypes, give them away to people who need them, and then watch to see what happens.

Nine times out of ten, you’ll receive a kind but lukewarm response, and you’ll know that your idea is never going to be as big as you thought it would be. It’ll hurt, but at least you’ll know.

And it all starts with you.

You have to stop worrying about getting the credit or finding the right venue or waiting until the right time, and just give it away, right now, to as many people as possible. It’s counterintuitive, but the more people who know your idea, the safer it is.

It’s the brilliant people who keep their ideas to themselves who lose out. Someone like Alexander Bell comes along, makes the same discovery, and spreads the idea around the world, while Mr. Brilliant keeps busily figuring out the optimum strategy.

Don’t be that guy. We already have far, far too many geniuses who closet themselves away from the world with the rationalization that no one understands or respects them.

What we need are more evangelists, people who are willing to fight tooth and nail for their ideas, to change the world not through money or power or smarts, but by drowning out the voices of anyone who dares to disbelieve.

That’s what Alexander Bell did, and I believe we can do it too. The world is waiting for us to speak up, and all we have to do is step up and take the microphone.