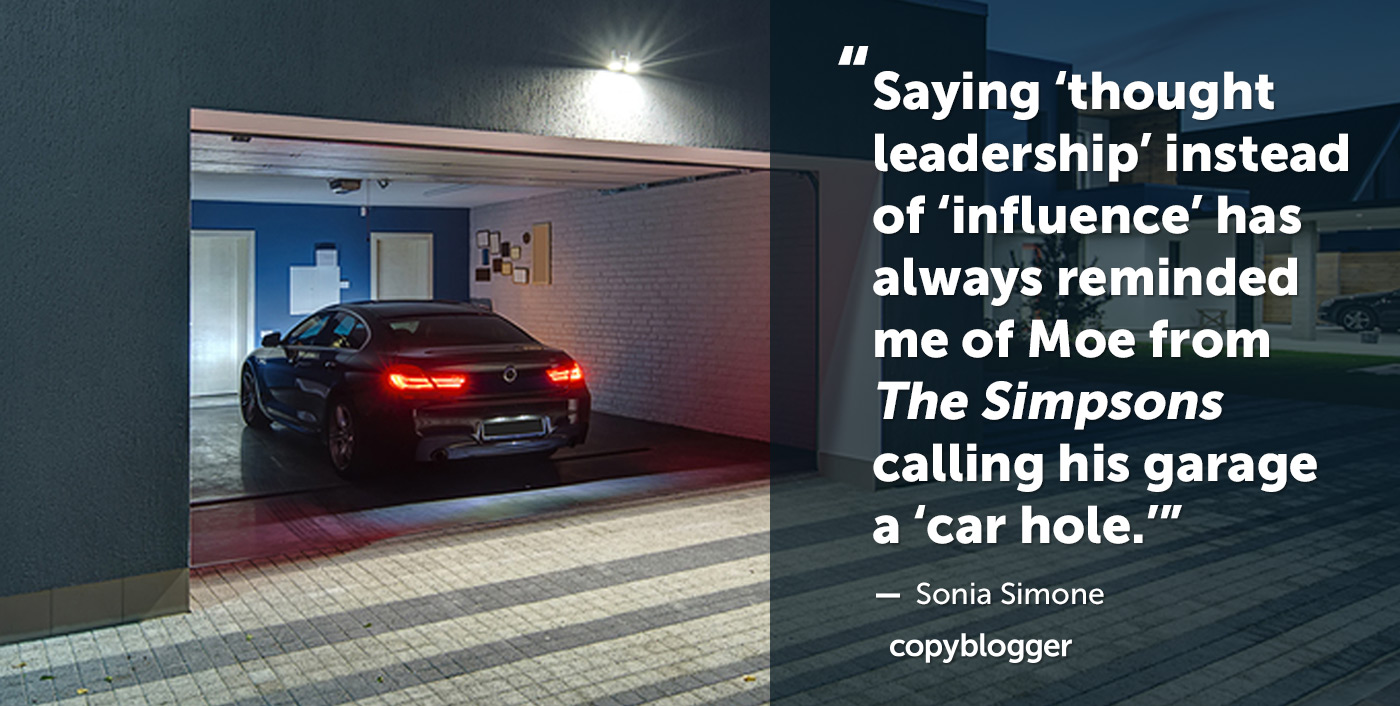 We all want to get traffic to our websites. We want to build audiences who are interested in what we have to say and responsive to our offers.

Perhaps even more coveted than “going viral,” thought leadership is that elusive, glittering prize — the Golden Snitch of web publishing.

Most of us (I hope) know better than to self-identify as thought leaders. But we think it would be kind of great if other people started calling us that.

I’m not buying it. And here’s why.

First, the petty part: I just hate the term. It’s a clumsy verbal construct that has no need to exist.

Saying “thought leadership” instead of influence has always reminded me of Moe from The Simpsons calling his garage a “car hole.”

But I have real reasons, too.

But thought leadership implies that you have some kind of shiny, new insight that no one has articulated before. To be a thought leader, what you’re saying can’t just be interesting, well-reasoned, and useful — it has to be new.

Novelty is not wisdom

Allow me to propose a radical notion:

We don’t actually need a bunch of new thoughts. We need to pursue and implement the existing thoughts that make sense.

I’m not talking about innovation in technology … that’s going to happen whether we have “thought leaders” or not.

I’m talking about people who claim completely new insights about how the world fundamentally works — whether it’s health, business, the environment, or anything else we care about.

Most thought leaders create novelty in one of two ways.

The first is to repackage old advice in a sparkly new wrapper. Marketers have done this forever, and I don’t actually have a problem with it. New wrappers make things more interesting, and that gets us to pay fresh attention to those darned fundamentals.

But don’t kid yourself and think it makes you a thought leader. It makes you a good teacher. Which is better, because it’s useful.

The other way, of course, is to make up some nonsense.

Tell us all about how the future will belong to left-handed people, that in 2030 the global economy will be based on bacon, or that you’ve identified breakthrough, new research showing that eating nothing but transparent food will make you 17.684 times more intelligent.

If you are in possession of special, unique wisdom that no one else knows about, either you’ve dressed some old wisdom in a new suit or you are pushing a great big pile of BS.

Every expert you know is wrong about something

My other problem with thought leaders is that their audiences start to see them as cult leaders.

I’ll never forget reading some guy’s 50-line-long comment on a Tim Ferriss blog post, asking about what and when he should eat to correspond with variations in the timing of this person’s bowel activity.

This is literally a person asking Tim Ferriss how often he should take a shit.

We expect thought leaders to be quasi-religious figures, blessing us with their deep thoughts and profound insights, and showing us their unique sacred path to life, liberty, and the pursuit of happiness.

Implicit in this idea of a thought leader is the notion that you need someone to tell you how and what to think. And that, frankly, is a terrible idea.

Thought leadership is a bubble

My other issue with thought leadership is that it’s a catchphrase for a bubble that doesn’t need to be reinforced.

The world is made up of a lot of different kinds of people. They come from different places; they look different; they do different things on their days off; they have different family lives and social circles and work histories.

Do we really need more Business Insider types telling us how the world works? Could we maybe hear from some people who don’t have the exact same CV, the same vocabulary, the same haircut, and the same sports jacket?

Might it not be useful to determine our paths for ourselves, based on our own observations and intelligence, reflecting our individual experiences, striving to see the larger picture, and weighing the informed opinions of actual authorities who back their assertions with credible evidence?

You don’t need someone to tell you what to think. I trust you to have that covered.

Your audience doesn’t need it, either. They’re smart. But they have questions, and you can help with that.

I believe it’s useful to step up and share your experience. I find it’s massively useful when someone who has done something difficult talks about what they’ve learned along the way.

I believe in expertise. Some people are better at a given skill than others. Usually because they have a lot of practice doing it.

I believe that most of us have days when our confidence fails, and we can use a pep talk.

So, what if you actually come up with a new idea?

New ideas do actually come up sometimes. Maybe you’ll come up with one of them.

If you have a new perspective or insight, and it’s supported by credible evidence, that can be a powerful thing.

Write about it. Question it. Investigate it. Teach it. Promote it.

Just like you do with all the good advice you offer. Whether your idea is good or bad doesn’t depend on an overused label.

The world doesn’t need you to chase after some empty notion of thought leadership.

Leading your audience with your expertise, your confidence, your integrity, and your passion for their well-being is enough.

Previous article: 2017 Content Excellence Challenge: The April Prompts
Next article: How to Get Your Writing on the Road to Being Read and Spread