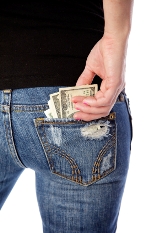 Dave Navarro wrote recently that worrying about what you’re doing (or not doing) is the surest way to keep you poor and unsuccessful.

It’s a cracking article with a heap of good points, one of them being that the key difference in the way successful people operate is that they see failure as an integral part of the process of achieving success.

That’s true. Unless you plan on spending all your time underneath your duvet, failure is in your destiny. Trying to minimize or avoid failure will not help you be successful.

But here’s the thing. Trying to be successful will not help you actually become successful, either.

The problem with success

You’re probably here because you want to be a successful person. You want the material and emotional benefits that come with that.

That’s awesome and I want it to happen for you. But while there’s nothing wrong with success, there are five important reasons why success for its own sake is the wrong focus:

1. Success is a moving target

Be honest, what’s success for you?

Too many people don’t create their own definition of success. They chase an idea they’ve patched together from what they’ve read, observed, or think they should be aiming for.

Do you know the feeling of not being wholly convinced that you’re pursuing the right success for you, but you’ve carried on regardless? That’s not how real success is achieved. Because even if you’re outwardly successful, you’ll feel disconnected from it. Achieving the wrong kind of success will always feel hollow.

2. Success is the wrong motivator

It’s too often based on extrinsic factors — the things you believe success can deliver.

Whether it’s physical goods, the feeling that you’ve “made it,” or thinking you’ll be free of worry and stress, these are all externalized projections about what a successful lifestyle will bring you.

When you make decisions based on an external motivator, it’s much easier to second-guess yourself. Motivation that comes from within is much more grounded and more powerful.

If you’re working hard to make something happen, it’s easy to dream about the moment you become successful. We all tend to fantastize about that big pay-off for all our hard work.

That kind of success is always elusively around the next bend. Just a few more weeks or months away. Just a bit more work, and you’ll finally be successful.

But what about now? What’s stopping you from feeling like a success right now, this very moment? Waiting for success in the future takes you out of the game in the present.

4. Success does not eliminate worry or fear

Being successful does not change how your brain works.

Success often increases worry and fear, as you question how you can repeat it or worry about losing it.

What eliminates worry and fear is shifting the patterns of thinking that result in self-doubt and second-guessing.

5. Success is limited by confidence

Perhaps most important, any success you might experience is limited by your self-confidence.

If success is achieved by taking repeated, meaningful action, then what happens if you’re not confident enough to take the actions that scare the crap out of you?

What will you do when things go wrong? Without confidence, you’ll be more inclined to retreat, beat yourself up, and reinforce a negative self-image. Nasty.

Placing your efforts on being a “successful person” is putting energy into the wrong place. It’s allowing in the complications I’ve listed above (and there are more that I haven’t listed) and ignoring how you’re thinking about what you’re doing and how you’re doing it right now.

Instead, what I’m suggesting is that you place your focus squarely on becoming a confident person, rather than a successful one.

To borrow from Dave’s article:

Success is not a person. It’s an event.

Shift your thinking from being a successful person to a confident one, and you’ll experience more success events and more failure events, both of which have abundant rewards. Here’s how to do it, right now.

I’m always banging on about playing a game that matters, for the simple reason that it forces you to deeply engage with something that has personal meaning. It aligns your efforts with what matters to you and ensures that you’re intrinsically motivated to play to the best of your ability.

If you want to be the best tennis player you can be, it will only really happen if you get enjoyment from the act of playing tennis. Start off with the aim of winning a shiny cup and you’re setting yourself up for struggle and second-guessing.

Rolling around in your head are expectations about what you can and can’t do, should and shouldn’t do, must and mustn’t do. Then you add in all the expectations you have about other people.

And most brain-numbing of all, you have expectations about what other people expect of you.

Forget all of that and just play. The best tennis players aren’t darting around the court thinking about how they should play the game. They use natural ability and learned skills and strategies to play to their best level.

Confident action is using your values, strengths, and talents to support your decisions and the actions that follow.

Confident action is trusting yourself to make the next decision, no matter how this one turns out.

Listen to the voices

Those voices in your head can be confusing, but you need to listen to them (unless they’re telling you to set fire to the town hall), because that’s the only way to recognize what’s real and what’s imagined.

You don’t want to let those voices control your thinking, or you’ll be running in circles forever. But you do want to start paying attention to them, noticing the difference between the voice of fear and one of your best assets, your intuiton.

Don’t shoot the messenger, but things will go wrong and you will screw up.

The good news is that you always get to choose how you think about what goes wrong. A screw-up is only a big deal if you decide it is. By looking at it in a different way, there’s no need to retreat or beat yourself up.

People experience success because they’ve achieved a level of natural self-confidence that allows them to take meaningful action.

They’ve achieved a level of natural self-confidence that allows them to trust their behavior, rather than focusing on the outcome of that behavior.

I want to know what you think. How do you see confidence and success? Let us know in the comments.

Previous article: How to Make More Sales With the Help of ELO
Next article: Johnny’s Copyblogger Wrap-Up: Week of June 14, 2010