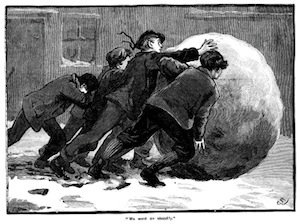 You know it, I know it, and even if you’re as cynical as I am about shiny marketing fads, you probably realize that our lives ultimately revolve around stories.

Human beings are wired for story.

Stories really are how we make sense of the world.

In my role as Content Manager for ProBlogger, I think quite a bit about what makes a good story. If you’re a normal human being with any interest in others, you probably already have a good instinctive sense of story.

But we can always do better. Something I’ve been experimenting with for various clients — including ProBlogger — is the use of continuing story arcs over more than just a single piece of content.

Let me show you what I mean …

Warning: this is not rocket science

Any time you’ve read or heard the words “following [Name’s] journey in [topic]” — on tv, online, wherever — you’re seeing a longer-term story arc in action.

If you’re old enough to remember The Brady Bunch (I can’t believe I just wrote that!), you might remember their trip to Hawaii, when the villainous tiki Greg wore surfing knocked him off his board onto some rocks right at the end of on episode. All night, I wondered about Greg, who stayed beneath the waves until 4pm the next day, when the next episode aired.

That kind of engagement is what we want to achieve using storylines.

Consciously developing key storylines through your ongoing, rather than one-shot, marketing efforts acts like glue, sticking readers to your blog, social media accounts, and other communications.

We really do see it online all the time:

So we can use it on a campaign basis. But writers working on brands for the longer term can use this idea to develop stronger loyalty over time.

How a story arc works

Let me walk you through a very basic example that shows how using a story arc can add real value to your content marketing plan.

ProBlogger relies heavily on guest posts, which is something that founder Darren Rowse decided to implement as a means to open up opportunities for other bloggers.

That’s great, but that focus doesn’t lend itself to making the most of story. To put it another way, you could come to the blog on any day of the week, and learn something great from a single post. The blog is a valuable source of one-shot information. But aside from thinking “I need to up my blog income; wonder if ProBlogger has any suggestions,” you may not have a desire to come back to the blog on a regular basis.

This is the old version of marketing communications: we cause the audience to associate the brand with a need, and when that need arises, the audience thinks of our brand.

Using storylines within single articles is a good way to develop a brand, but to truly move beyond this need-solution perspective, the audience needs to engage with what contemporary marketers are so fond of calling “the brand story” — the actual story of what’s happening to the brand persona over time.

This is the new version of marketing communications: we create an emotional connection with readers (through story) that causes them to naturally wonder about our brand, and that entices them to come back and check out the latest installment of that brand story.

To do this, the story has to transcend the medium, time, and campaign. It means that as marketers and writers, we need to construct stories, and execute them, in a continual way, and in a way that evolves in real time, along with the market and the audience.

Here are some of the ways we’ve done that at ProBlogger.

A series of articles

Yep, the good old series can give readers a reason to come back day after day, or week after week, depending on how you schedule the posts.

We frequently run series on topics we know segments of our audience are interested in, using exclusively guest posts.

Another no-brainer: promote your series in other media. With a guest post on another site. In a video interview. On social media. Through advertising.

If you’re creative about it, those integrated promotions can add to the story. For example, Darren might add to the narrative around a guest post series by tweeting about a post he learned something new from, and explaining what he’s done as a result of it.

For a short-run series, that kind of cross-promotion would happen simultaneously: the post is published, Darren tweets about it within the next 12 hours, say.

But for longer-running stories, like the Queensland Blogging Event that ran earlier this year, the social discussion can be drawn out over a much longer time period.

Keeping the discussion going around a given story line is a lot easier if you’re prepared to do it in your own posts — and this is something that we do at ProBlogger quite a lot.

For example, earlier in the year we ran a little feature on niche blogging.

This was one of our “weekend project” series, which are intended to provide a storyline for an entire weekend of posts. This is one attempt to use story to keep readers coming back over what are commonly more quiet times on the blog.

As a result of some of the comments on those posts, Darren decided to keep the niche storyline flowing, and followed up with a post on writing for a diverse audience.

The comments on that post generated a subsequent post that went further into the nuances of the topic. Since we hadn’t anticipated the extra piece, and thus hadn’t been able to preempt it by a mention in the first post, we named it similarly to the first, in order to flag our readers that this discussion was ongoing.

The results are born out in the comments, where readers acknowledge that they’re enjoying the ongoing discussion, and those who missed the first installment comment that they’re off to read it next.

I mentioned earlier the Queensland Blogging adventure that Darren hosted earlier in the year. This was a big story for ProBlogger and its readers, and we used a traditional story arc to help engage our audience with it over time:

That’s a pretty standard story arc. And you can see how this kind of story — which isn’t related to a direct “need” to do with pro blogging — would stick in someone’s imagination, luring them back to the site in order to find out what’s happened to the story since the last installment.

We didn’t want to lose the momentum of that story, so Darren posted from the event itself:

The social discussion through this story was ongoing, providing real-time additions and nuances that are invaluable in real-world stories, and help bring reality to what might otherwise have seemed overly crafted story components.

Finally, later in the year, we ran a series that provided a sort of epilogue to the main story. It showed how the bloggers who went on the trip had applied what they’d learned in their own blogs. This follow-up series rounded out the main story by drawing it back to the key tenets of the ProBlogger brand.

(Also, if you look at that post, you’ll note that it continued another story we’d been exploring on the blog, about networking and the importance of people in pro blogging success.)

These are just a few ideas for implementing continuing storylines, as opposed to continually creating one-shot articles for your site.

Create ongoing stories around the key themes of your brand, and you’ll have a continuous source of ideas for content, promotions, and communications that work together to build brand engagement and loyalty over time.

How are you using, or building story arcs in your communications? I’d love to hear about your techniques in the comments.

Georgina Laidlaw is a freelance content developer, and content manager for problogger.net. She lives in the countryside near Melbourne, Australia. You can find her on Twitter and LinkedIn.

Previous article: 5 WordPress Mistakes Even Experts Can Miss
Next article: How to Build a Referral Engine That Works