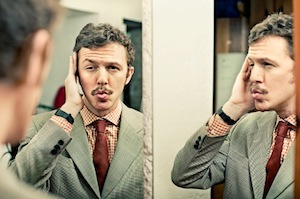 Ever think you might be starting to take social media a little too seriously?

Sure, it started out innocently enough.

You were hanging out with family and friends, cracking jokes, sharing cool ideas, and having some good old-fashioned fun on Farmville. You know, pretty much like everyone else online.

Without even realizing it though, your perspective began to shift.

The more time you spent on Facebook and Twitter and Reddit and YouTube, the more it sucked you in, and after spending literally thousands of hours involved in online communities, one day it hits you:

Somehow, somewhere, you got… serious.

You started counting your retweets.

You sneered at companies who abused your attention with gimmicky marketing campaigns.

Not because you’re against advertising, necessarily, but because that’s not what social media is about. It’s about connection and authenticity and building movements of people who genuinely love your brand.

Some people don’t get it. They’re so frantic to make a buck they pervert everything social media is supposed to be.

And so, without even realizing it, your perspective shifts again.

It becomes a battle of us versus them

Not that you would say this publicly, of course. You scorn the legions of clowns who call themselves social media experts, and you believe anyone who sets themselves up as superior to anyone else is an asshat.

But secretly, you feel superior.

You’re not a better person or a smarter marketer or anything like that. You’ve just been around, and you understand what’s going on.

What’s more, you enjoy hanging around other people who “get it” too. You enjoy talking about what’s next. You enjoy being one of those people who pushes the frontier of social media forward.

And anyone who disagrees with you is a moron.

Does any of this sound familiar?

If it does, I have news for you. You might be on your way to becoming a genuine Social Media Snob.

I know this, because I’m one too. So are most of my friends.

And frankly, it worries me.

But it’s also dangerous, because often without even realizing it, you become disconnected from “them.” You stop understanding their perspectives. You see the world in a completely different way.

And in this case, “them” is the majority. There are hundreds of millions of people who don’t “get” social media, and there are only a few tens of thousands who do.

Whenever the minority gets disconnected from the majority, problems happen

Just look at the U.S. Congress, who has the lowest approval ratings in the history of the country.

They think they get it, but they don’t. They live in a reality distortion field called Washington DC.

What worries me is that we’re building our own reality distortion field, and one day, we’ll be just as out of touch. With some of the leaders in social media, I think it’s already happening.

And I think we need to be very, very careful.

In our industry, you don’t just lose your swanky office on Capitol Hill when you get it wrong. People vote with their check books, and the ones who get voted out go bankrupt.

Snobbery may be natural, but it’s also dangerous. If we want to stick around, I believe we need to guard ourselves against it.

So, how can you tell for sure if you’re a social media snob?

Well, you can’t, but there are warning signs.

Here are a few that immediately come to mind. No single warning sign damns you on its own, but if you find yourself nodding to many or even all of these, you may be in trouble.

So, what’s your score?

Personally, I’m guilty of 11. Not exactly the King of Social Media Snobs, but I’m definitely a member of the club.

But here’s the thing:

Once you’re aware of your snobbery, you can take steps to counteract it. I don’t believe you can get rid of it, per se, because some people (like me) will always be a little bit snobbish.

You can stop it from becoming a problem, though. Because you see, social media snobbery is only dangerous when it’s not accompanied by an equal degree of empathy.

And therein lies the solution.

The antidote to snobbery is empathy

Or, more specifically, empathizing with the people who annoy you the most.

Irritated by a popular blogger in your niche who posts advice you know is rubbish?

Subscribe to their feed. Read every post they write. Do your best to understand exactly where they’re coming from, and why they believe the way they do.

Getting a little tired of beginners asking you the same questions over and over again?

Tough. Schedule two Q&A calls per month, and force yourself to listen.

Feel like everyone else in your niche is selling crappy products?

Buy a few. Go through them, and ask yourself what can be improved and why. Even better, go into customer forums and listen to what they are saying.

The big lesson here isn’t just to listen. It’s also to care. You have to want to understand.

The marketer with the most accurate thinking wins

You want to be the top dog in your market?

It’s about understanding your market better than everyone else.

That doesn’t excuse you to ignore other fundamentals like building relationships, publishing great content, or building a quality product. Those are still essential.

But all other things being equal, the marketer with the most accurate thinking wins.

And you know what?

You can ignore all the stupid stuff that doesn’t matter

You might’ve heard the saying, “Don’t sweat the small stuff, and it’s all small stuff.”

In business, there’s only one thing I’ve found that really and truly matters:

The more people whose lives you change with what you’re doing, the better off you are. So, focus on the things that help you help people.

Promoting products you believe in is a good idea too. Sure, recommending crap to earn a quick commission is wrong, but if the product is awesome, and it would genuinely help your list, then you are doing everyone a disfavor by not promoting it.

The same goes for selling your own products and services. Yes, you could give it all away for free, but ultimately, your ability to help people is dependent upon having enough money to pay your bills.

In fact, the more money you have, the more you can expand, and the more you expand, the more people you can help. By that logic, refusing to charge for your products and services is hurting not only you but all of the people who will never know about you because you’re freaking broke.

Is this making sense?

I hope so, because the truth is, I’m really and truly concerned with where social media is headed.

Folks are getting so self-righteous. They sit there with their iPads and lecture the world about the proper way to use social media, and most of what they’re saying has no basis whatsoever in reality. It’s just smoke and bullshit.

As the small minority who “gets it,” we owe our audiences more than that.

They deserve to be listened to.

They deserve to be cared about.

And most of all, they deserve to be given advice based on solid evidence.

In other words, we owe it to them to be real.

If that makes me a snob, then so be it. I’ll hang my flag high.

So, I guess that leaves only one question …

Previous article: 15 Grammar Goofs That Make You Look Silly [Infographic]
Next article: Jay Baer on How to Turn Interested Prospects into Lifelong Customers