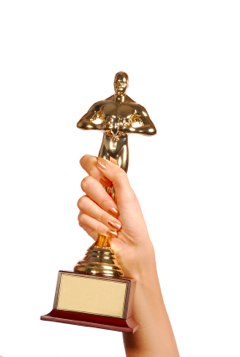 Did you see the Oscar awards the other night? Yeah, I didn’t either. tl;dw.

But like most people with social media accounts, I did see chatter about it that night and the next day.

And who was the darling of this year, amid the usual tedious acceptance speeches and awkward emcee moments?

Best Actress winner Jennifer Lawrence was also the informal winner of this year’s “adorable celebrity” award, for stumbling on her way up the stairs.

What made it work was the way she handled it, both immediately after and in the media interviews that followed. Starting with the fact that she didn’t seem to be “handling” it at all.

Here are a few quotes:

Reporter: The fall on the way to the stage … what happened?

Lawrence: What do you mean what happened? Look at my dress. (laughs) I tried to walk upstairs in this dress. That’s what happened.

Reporter: What went through your mind?

Lawrence: What went through my mind when I fell down? Uh, a bad word that I can’t say. (pause) That starts with F.

Reporter: What was the process of getting ready [for the Oscars] today?

Lawrence: I don’t know, I woke up and tried on the dress, and it fit, thank God. And then, uh, I took a shower. (expression of confusion at the randomness of this question) Then I got my hair and makeup done, and then I went to the Oscars.

If you like, you can see a video of the interview by clicking Play below. As you can see from the preview, Lawrence’s facial expressions play an important role.

Media training in evidence? Not much.

Polished, crafted sound bites in response to the dumb predictable questions? None.

The expected bright, shiny mask most celebrities wear? Not here.

She was asked a bunch of silly questions and she gave honest, silly answers.

There are a couple of steps you can copy here to bring to your own social media networking … and start using it to actually move your marketing and your business forward.

Step one, do some damned good work. The woman didn’t get an Oscar for stumbling up the stairs, she won it for excelling at her craft in the film Silver Linings Playbook.

Step two, get over yourself. If an actual Hollywood movie star can quit taking herself so seriously, so can you.

You don’t have to go out of your way to be a train wreck, but you also don’t have to pretend to be some mythical perfect person who has their act completely together.

To be a successful web publisher, it helps to be a human being

Real celebrities have to answer silly questions for magazine and television interviews. Why? Because it helps grow their audience. When the audience feels like they know an actor, they’ll make a point of seeing projects that actor is involved in.

It works the same for you and me, but instead of paparazzi, we have social media accounts. (This is, trust me, one of the very few advantages of being internet famous over the real kind of famous.)

Content publishers spend time in social media for the same reason actors go on press junkets — it builds our relationship with our audience. It lets people get a sense of who we are.

And who stands out in the social networking game?

People who do excellent work (in whatever your realm might happen to be) but don’t put on fake, stiff personas that they think are “professional.”

Be a human being. Stop trying so hard to be cool or clever or impressive.

Your mom had it right all along. It’s much cooler, cleverer, and more impressive to be yourself.