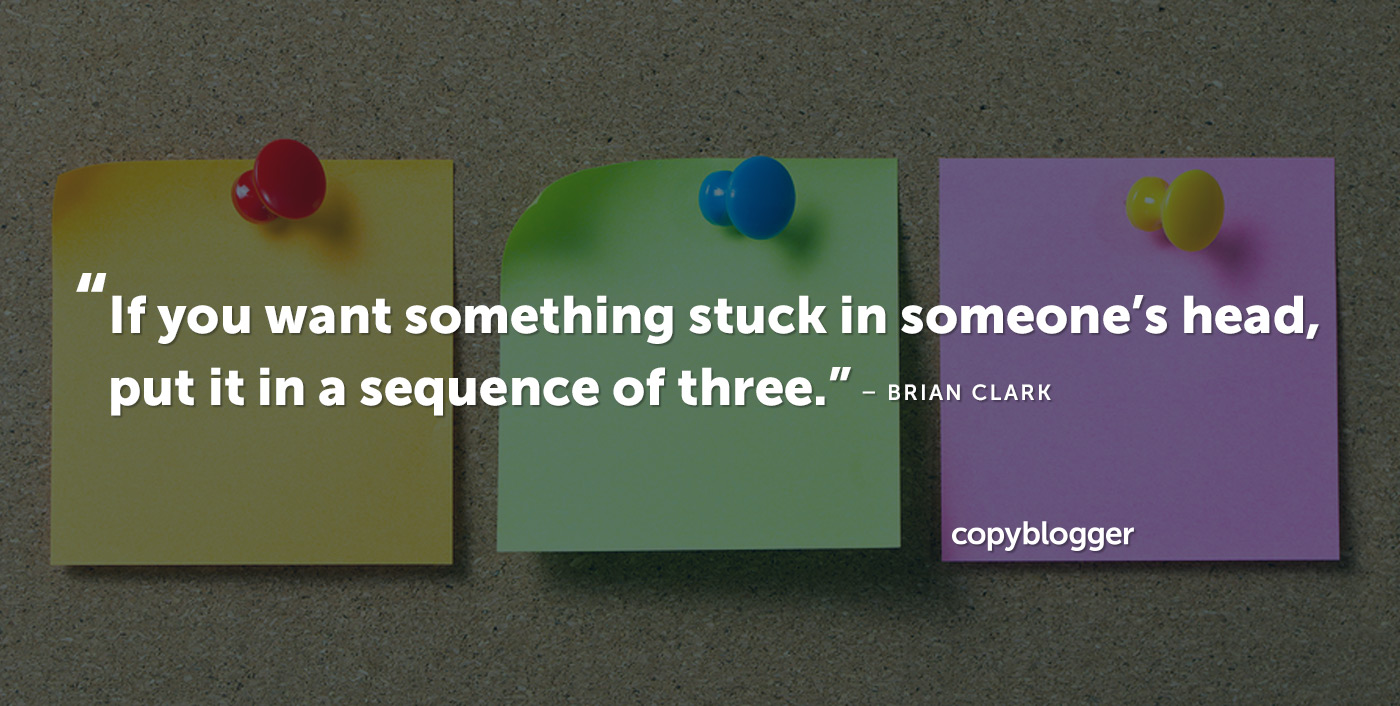 What’s so magical about the number three?

It’s no accident that the number three is pervasive throughout some of our greatest stories, fairy tales, and myths.

It’s also no coincidence that some of the most famous quotes throughout history are structured in three parts, nor is it surprising that the Rule of Three also works wonders in the world of comedy.

It all comes down to the way we humans process information. We have become proficient at pattern recognition by necessity, and three is the smallest number of elements required to create a pattern.

This combination of pattern and brevity results in memorable content, and that’s why the Rule of Three will make you a more engaging writer.

Have you ever wondered:

The Rule of Three works in stories due to the presence of the concise, memorable patterns that I mentioned above.

But even if that wasn’t the case, the number three has been used so widely throughout some of the most memorable works from our childhoods, it’s likely that we are preconditioned to respond favorably to elements grouped in threes.

Think in terms of three when crafting your content strategy and you’ll likely end up with a more engaging outcome.

If at first you don’t succeed, remember: the third time’s the charm.

You see the Rule of Three used all the time across diverse areas of life.

Because information presented in groups of three sticks in our heads better than other clusters of items.

The United States Marines are big believers in the Rule of Three when it comes to getting things done and keeping people alive.

The Corps apparently experimented with a rule of four, and retention and effectiveness took a nose dive.

If you want something stuck in someone’s head, put it in a sequence of three.

Want to Learn How to Make Content Marketing Profitable for Your Business?

Get our free guide, How to Build an Audience that Builds Your Business.

One of the best examples of the power of the Rule of Three is in the world of comedy.

Again, three is the smallest number of elements that can form a pattern, and comedians exploit the way our minds perceive expected patterns to throw you off track (and make you laugh) with the third element.

The Rule of Three fits the classic joke structure of set-up, anticipation, and punchline.

The three-part grouping also allows for tension to build and then be released thanks to the surprise and absurdity contained in the third element.

Here are a couple of humorous examples that use a shocking third element within the Rule of Three structure.

“I can’t think of anything worse after a night of drinking than waking up next to someone and not being able to remember their name, or how you met, or why they’re dead.”

Here’s one from Jon Stewart:

“I celebrated Thanksgiving in an old-fashioned way. I invited everyone in my neighborhood to my house, we had an enormous feast, and then I killed them and took their land.”

Using humor in your writing can be risky since some people just won’t get it, but using a Rule of Three approach is a safer way to make a funny.

Professional comedians use it all the time, and that’s simply because it works.

Other uses for the Rule of Three

I truly do believe writing bullet points as a set of three is the most effective use of the format.

You might also find that list posts with three items will draw people in, because you’ve boiled things down to the essence with no fluff. And there’s a reason why people like to be presented with three choices rather than two or five.

When it comes to pleasing the human brain, it seems like three is simply a magic number. At least that’s what Schoolhouse Rock taught us as kids.