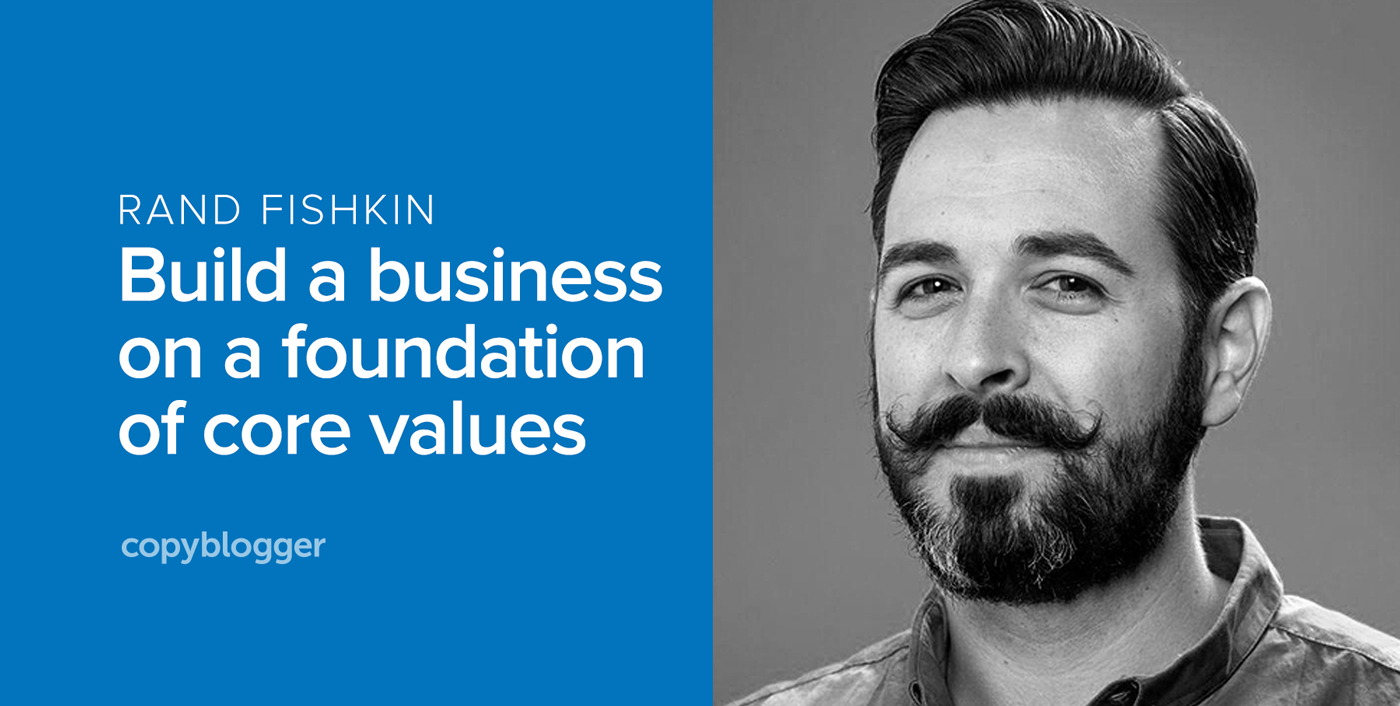 Rand Fishkin is known for founding an incredibly successful company — while keeping an unwavering commitment to his core values.

You may have noticed, if you look around at the general business landscape, that a lot of successful founders are a bit cocky. They tend to overestimate the role of their own genius in their success — and underestimate the hard work of their teams and the luck that went into that success.

(And no, for the curious, I’m not counting Rainmaker Digital founder Brian Clark in that group.) 😀

For example, founders of successful businesses typically play certain cards close to the chest. They’re highly selective about what they reveal about their businesses. And there are some strong business reasons for doing that.

Rand, on the other hand, is radically transparent about the good stuff and the bad in his business.

“Transparency is synonymous with Rand Fishkin, in a fantastic way.” – Brian Clark

Sometimes that transparency has come at a price. But it’s one of Rand’s deepest core values, as well as a foundational value for his business. And while his commitment to extreme transparency has closed some doors … it’s also opened some amazing ones.

Like so many stories of explosive growth, the company now known as Moz started out on a rather winding path.

The company started life as SEOMoz, a side project for Rand while he taught himself SEO. Eventually it became a full-time consulting firm. In 2007, they started exploring SaaS (software-as-a-service), selling the digital tools that they were using themselves in-house. The transition from consulting firm to software publisher wasn’t complete until 2009.

The very nature of SEO made it an interesting choice for Rand, who describes himself as someone who genuinely hates secrecy.

Here’s how he put it in an interview with Brian Clark on the Unemployable podcast:

“I both loved and had a love-hate relationship with it. … At the time that I got into it, there were very few folks who were transparent about what they did and how they did it. SEO was much more of a club of secrets, and there were a lot more black-hat and gray-hat techniques. But even the folks who weren’t using those sort of manipulative, search engine guideline-violating techniques, were keeping it very close to the chest in terms of not sharing the information — and the search engines were actually the worst of all. … So today you might say, ‘Oh, Google is still very, very cagey about how they work’ — but today, oh my god, compared to those days, it’s a pane of glass versus two tons of steel.” – Rand Fishkin

That environment of secrecy was antithetical to who Rand was as a person. As he put it:

“I wanted to make it transparent. I wanted everyone to be able to freely access information about how search engines worked, about how SEO worked.”

Moz was one of the early forces working (another crucial one was Danny Sullivan with Search Engine Land) to create an SEO culture of working with search engines rather than trying to hack their secrets.

Rand quickly learned one of the cornerstones of content marketing — that trying to keep “trade secrets” isn’t always the road to an ultra-successful company.

Rand doesn’t sugarcoat the process of evolving from consulting firm to SaaS powerhouse:

“It wasn’t strategic in any way … we were deeply in debt and searching for anything that could make us any money.”

He’s not the only founder this would be true for — but he’s one of the few who are confident enough to admit it.

As Rand puts it, SEOMoz “fell into” software, starting a paid subscription to a few tools on a whim. They took months to start calculating key metrics like churn rate — and didn’t calculate it correctly for years.

On his blog and in interviews, Rand consistently makes a point of highlighting wrong turns he made as CEO and also crediting others who have helped Moz become more successful.

This kind of self-reflection isn’t just a personal exercise — it allows Moz to sustain its growth and success, without running off the rails.

Companies that fail to take a long, hard look at the real picture often find themselves in a ditch when it’s too late to course-correct.

Organic growth and the audience-first approach

One of the many reasons we like and admire Moz is that, like Copyblogger and Rainmaker Digital, Moz is an audience-first company.

Rand started, as many web-based authorities do, by exploring his own journey and helping others as he went. That early commitment to transparency paid off, as he quickly grew a loyal audience by teaching what he was learning.

At a key point for SEOMoz, Rand sought investment capital for the company and failed to get it, as many companies do. So he turned to his email list with a powerful offer — and unleashed the kind of “hockey stick” growth that any company would envy.

(Rand elaborates on that story in his Unemployable interview with Brian, which is a great listen.)

To this day, Rand’s “whiteboard videos” for Moz continue to build his audience, and strengthen their loyalty, as well as share key insights about a topic.

Moz is also known for a genuine core set of values that guide the company — they call it TAGFEE.

(The T, as you might guess, stands for transparency.)

While a lot of companies give lip service to values, Moz uses them in a very pragmatic way to guide decision-making and ensure that the company maintains a productive, healthy culture.

“When we empathize with someone, we give them permission to keep telling the truth.”

And empathy is the first E in TAGFEE.

And that translates directly into the excellent customer experiences that cause companies to thrive and grow.

What makes the difference in a company that’s actually living its values? Often, it’s the commitment and leadership of a passionate founder.

Even humble leaders can have blind spots

Rand also tells the story of how a blind spot in his thinking created an expensive, time-consuming flop for this famously humble founder. (Don’t worry; he also shares what they did to bounce back.)

No business has a smooth success curve. And no business owner is right all the time. One of the great lessons to learn from Rand is that if you keep showing up and paying attention, you’ll learn from the misses and figure out how to course-correct.

Do we always do this early in the game? No — but we can always bring our best efforts to the problems.

A lot of keynote speakers share some traits with those cocky successful founders.

They present a glowing, warm-and-fuzzy viewpoint that’s inspirational (for a little while) but doesn’t give you the complete picture.

But Rand, as you may have figured out by now, does things a little differently.

“For me, transparency doesn’t come from a strategic place or a tactical place. It comes from a place of core values. … For me, it’s not only the case that I hate lying and I hate dishonesty, I [also] hate information that is sequestered and unavailable.” – Rand Fishkin

That’s why Brian Clark reached out to Rand to keynote our live event in October, the Digital Commerce Summit.

Rand’s going to share the secrets of the eye-opening growth that Moz has experienced. He’s going to let you in on what worked and what makes the company such a powerhouse today.

And he’s also going to share with you what didn’t work. Where the company stumbled. Where he had to confront his own limitations — and figure out how to work around them.

He’ll talk about the power of keeping your eyes open and telling the truth — following the business where the opportunities open up, keeping humility and transparency at the forefront.

Rand won’t give you the polished, highlights-only version of growing a business. He doesn’t lie. He doesn’t puff himself up. He doesn’t downplay the hard parts or the mistakes that he’s made.

And because of that, you can take his advice and really use it.

That kind of honesty isn’t always convenient, but it’s a source of strength that will not fail you.

I hope you’ll join Rand — and the rest of our roster of speakers (including me) — this October in Denver, Colorado!

Click here to get the details and snag the best price on your tickets.

Previous article: 21 Juicy Prompts that Inspire Fascinating Content
Next article: The Content Junkyard (and Why So Many Articles Fail)