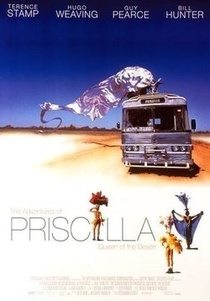 Remember The Adventures of Priscilla, Queen of the Desert? That was the 1994 Academy Award-winning film about three drag queens driving across the Australian outback in a large bus they’ve named Priscilla.

There’s something distinctive about the three main characters in Priscilla – they’re different from each other. They’re all drag queens, but they don’t look the same. It’s easy to tell them apart from the different clothes, makeup, names and personalities.

If you blog, you need to do that, too. No, not dress up in drag (though if you’d like to, there’s nothing wrong with that). I mean being different while standing with a group of similar peers.

You see, bloggers tend to look to other writers they admire and try to mimic that person. “Oh, if I could just be like so-and-so…” Blogging is a performance, but it isn’t the Rockettes line-up where everyone looks identical.

Find your own voice. Flaunt it like a bright pink feathered boa. Get naked, wrap your arms around it, and take it to bed.

Have Fun with Your Message

Strutting stage performers aside, Priscilla wasn’t all about hooting it up with a D-cup strapped on. It was a rather serious movie, exploring sensitive controversies and moral issues. Strip away the slinky dresses and false eyelashes and you find some deep messages.

The film doesn’t linger on the bad, though. Just a taste is enough. Instead of being dark or dramatic, Priscilla uses humor to deliver messages in full flamingo flamboyance.

That’s a lesson bloggers can take home. You don’t have to be serious to get your message across. Lighten up a little, sheesh. Using humor is a great way to entertain your audience while writing about a serious topic or a controversy.

Have fun – even when you’re being serious. It keeps people interested, relaxed and listening.

Beautiful Priscilla, Queen of the desert broke down in her journey across the outback, leaving the guys (or is that gals?) stranded. That could’ve been the end of the trip. Disaster! Failure! No show!

It’s especially easy to give up blogging when we get discouraged, too.

But the queens didn’t give up. The characters had faced countless hard times even before their desert journey even began. The breakdown was just a bump in the road, really. Cave in the face of setbacks and adversity? Hell no.

They made it to the big city and danced the night away.

That’s an important lesson for bloggers: Perseverance pays off.

So many bloggers get discouraged at the first sign of a bump in the road, but blogging isn’t about overnight successes. You have to be willing to persevere for the time it takes – and that time shouldn’t be measured in short months.

Priscilla’s drag queens knew they could do it. They strutted their stuff. No holds barred.

When you blog, believe in yourself too. Hang onto your determination. Stick with it. Find your voice and get out there on the stage. Shake your groove and then be proud of what you’ve done.

And that’s the last lesson Priscilla teaches us. The Australians were so proud of the movie that became an icon of their country that they drove Priscilla around in the closing ceremonies of the Sydney 2000 Olympics while the whole world watched.

Go on. The world’s watching. Get out there and strut your stuff.