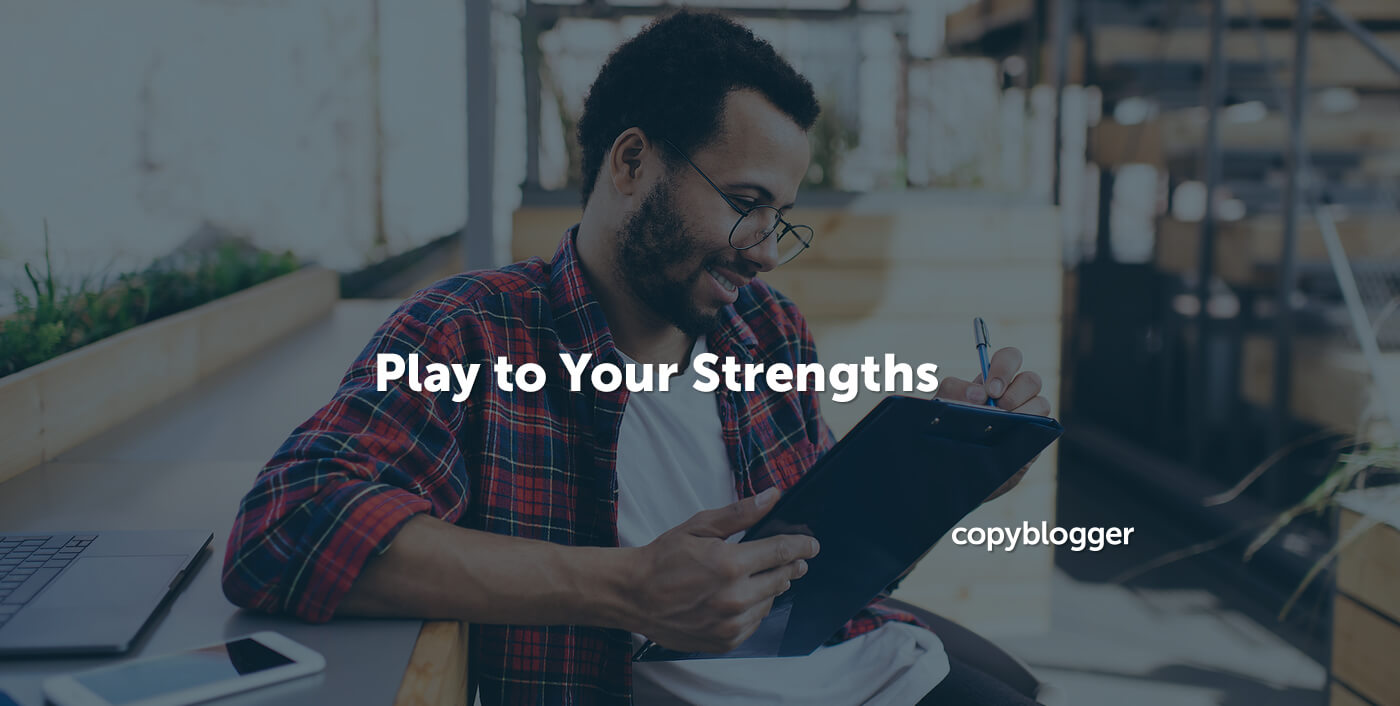 It’s often much easier to focus on what’s not working, rather than play to your strengths.

Have you ever stayed awake until 2 in the morning having an imaginary conversation with a blog reader who loves your writing?

Or spent hours obsessively trying to figure out how to do better work, spurred by a fan letter from a client about the terrific job you did?

It’s more likely that your late-night solo conversations and obsessive problem-solving go to the trolls, the complainers, and the folks who just plain can’t stand you.

Don’t worry. If you give an undue amount of attention to negative comments and feedback, to the extent of almost ignoring the good stuff altogether, it doesn’t mean you’re neurotic. It means you’re exactly like the rest of us.

Chip Heath and Dan Heath in their marvelous book Switch make this observation:

“This is not our world.

“But in times of change, it needs to be.”

An alternative: play to your strengths

The advice to focus on our strengths, not our weaknesses, in order to create breakthrough success is quite fascinating.

It’s so appealing, right? You mean I don’t have to learn to cold call or know how SEO for content writers works? Sign me up.

But it seems like another idea might contradict it. One that’s gained a lot of attention in recent years, especially when it comes to content marketing mastery: There’s not really any such thing as talent.

Researchers like Carol Dweck and nonfiction writers like Malcolm Gladwell tell us that what we call “talent” is really the result of a heck of a lot of hard work.

How do you play to your strengths, anyway?

It took me a while to realize this is a trick question. I thought that your strengths are things you’re good at and your weaknesses are things you sucked at.

But Marcus Buckingham, who’s made a career out of writing about strengths, put it this way:

“A strength is ‘an activity that makes you feel strong.’ It is an activity where the doing of it invigorates you. Before you do it, you find yourself instinctively looking forward to it. While you are doing it you don’t struggle to concentrate, but instead you become so immersed that time speeds up and you lose yourself in the present moment. And after you are finished doing it, you feel authentic, connected to the best parts of who you really are.”

When you play to your strengths, you uncover the activities that give you momentum. It’s the work you love enough to become the best in the world at. Give us 30 minutes and we’ll transform how you sell online.
This offer is free for a limited time.

Get Your FREE Conversion Assessment

An example of playing to your strengths

Have you ever heard how Yo-Yo Ma got his start as a cellist? As it happens, Yo-Yo’s parents are both musicians and had high musical expectations for their little son. So when Yo-Yo was three, they gave the boy a violin.

And Yo-Yo hated it. Wouldn’t practice. Wouldn’t focus. Didn’t have any zest for it. His frustrated parents finally gave up in disgust.

And then little Yo-Yo saw and heard something amazing, something that surprised and delighted him. Something that he knew was exactly what he wanted to play. It was a double bass — the violin’s really, really big brother. Now that was more like it.

The thing that works for you

He and his parents decided to split the size difference. Ma first began to study the viola and then settled (at four years old) on the cello. By seven he was a recognized prodigy, performing for Eisenhower and JFK, and by eight he played on national television, conducted by Leonard Bernstein.

To have become so skilled between the ages of four and seven, he must have put in untold hours of practice. But they were hours spent on something he adored, because he learned to play to his strengths.

One thing that interests me about Ma is that he isn’t just a brilliant cellist. He isn’t just world-famous and a name brand.

Ma also seems to be a remarkably happy and kind human being. He loves working with children. He radiates kindness and a certain goofy charm. He’s got a great sense of humor, referring to himself at times as an “itinerant musician.” And he’s known for boundless energy.

If I’m going to be a nationally famous virtuoso, that’s the kind I want to be.

When you see someone writing tons of great content and podcasting and doing everything else we’re supposed to do to build rosters of terrific freelance writing clients, it’s easy to ask:

How does anyone find the time to do all that?

The truth is, it’s not a time management problem — it’s an energy management one.

When you’re starting out, you do everything. You build the blog and write all the content and do the bookkeeping and answer the support emails. Some of those things build you up and some wear you down.

Pay attention to which is which

As soon as you can (it could be today), find partners who excel at the tasks that exhaust and deplete you. If you can’t find the right partner, outsource the aspects of your business that make you want to crawl back into bed.

And put your time and attention on what the Heath brothers call the “bright spots” — on what’s really working today. That’s how you play to your strengths. You focus on the work that gives you juice.

Do more of what’s working well, and what energizes and strengthens you. Double-down on what your readers and customers adore. Work on what you can do better than anyone on earth.

I know it sounds too simple to be real. But it’s how every genuinely great business — of any size — is built.

Previous article: How to Get Discovered as a Writer
Next article: Content Marketing for Small Businesses: 7 Projects for Brand Managers