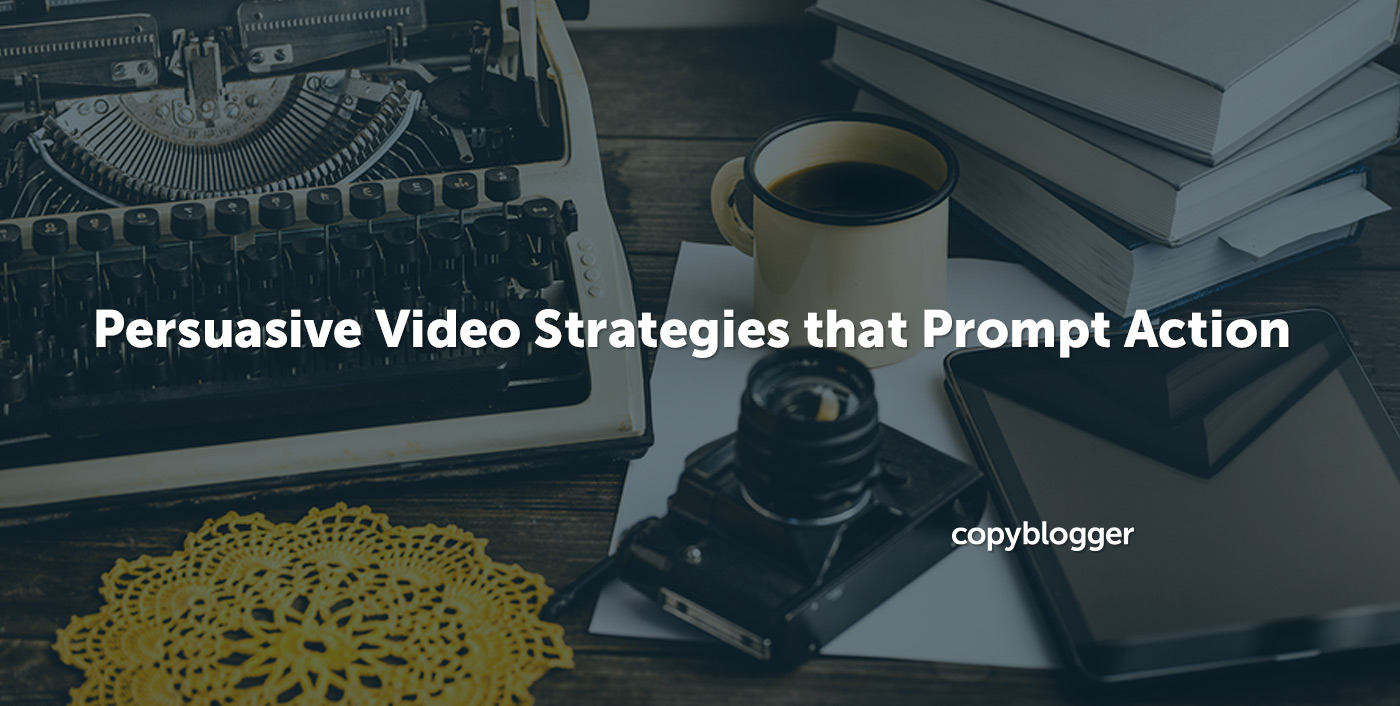 Persuasive video can be a highly effective and engaging form of content. But all too often, it’s … well, not.

Videos must be engaging before they can be persuasive.

Just as with getting someone to read an entire article, the idea is to get someone to start watching, and keep watching until the end, or at least to the point where you prompt the viewer to take a desired action.

Let’s take a look at the things to keep in mind to make your video content — whether live-action or presentation-style — worth watching until the end.

As you might have guessed, the four copywriting techniques that are great for audio content — stories and anecdotes, metaphors and analogies, mirroring, and mind eye’s projection — are all applicable to video.

In fact, they become even more powerful with the addition of select visuals.

Longer-form video is tougher to pull off from an engagement standpoint, so you may want to consider borrowing a three-act structure used in movies (or infomercials).

The differences between audio and video are important

When you follow webinar guidelines, you’re aware that audio is a portable content format that allows for greater mobility and requires less of an attention investment.

Your podcast or audio presentation can be listened to in the car, at the gym, walking the dog, or while multitasking at a desk.

Video requires a greater attention investment due to the need to watch and listen. You’re restricting the options of the viewer significantly more than with audio, so you need to keep things tight and moving along.

In other words, your pre-writing becomes more important with video than with audio. The question becomes whether or not you script out every word.

To script or not to script?

With audio, a detailed outline is preferable to a script in my opinion. With video, I write out every word due to the need to say more in less time.

It’s really tough for most people to “wing” an effective short video, because it often becomes less effective and less short the more you improvise.

With presentation-style videos, you’re off camera. This allows you to use your script directly and still present with a conversational tone of voice. You don’t want to sound like you’re reading if at all possible.

One tip for achieving a conversational video presentation style is to record small sections of your script at a time, rather than trying to plow through the entire thing in one take.

You can do this with recording software like Audacity by creating separate audio tracks out of smaller sections of the script, and then blending each part into a single audio track that you then marry to your visual elements.

If you’re turning the camera on yourself instead of doing a presentation-style video, you’re in a different boat. You’re either going to have to learn your lines, or get really good at using some kind of teleprompter.

The good news, however, is that there’s no need to nail it all in one single take. In fact, as we’ll see below, it’s much smarter to string together a series of persuasive video clips than one stream of unedited footage.

To keep your message focused and highly effective, keep your goal for the piece in mind at all times.

With that goal firmly in mind, make sure that every single word of your script supports that goal — or cut it.

This can be slightly difficult, because leaving out key information will hurt your effectiveness. You need a method for determining what’s essential to achieving the goal, and how best to say it.

Think of it this way:

Imagine you’re at a cocktail party and you’re the center of attention. You’re telling a joke or humorous anecdote and you want to nail it.

It doesn’t always go that way in real life, right? But scripted video is a chance to present the story perfectly … as long as you work out every detail beforehand.

So when telling a joke, the punch line is the payload. Delivering it is the entire point of the exercise. But the way you set it up makes the difference between getting uproarious laughter, tepid giggles, or blank stares.

Now, simply substitute your goal for the punch line when crafting your video message. Writing your script with this mindset can be highly effective, and a whole lot more fun.

So we know we’ve got to present our video message in a tight and fairly quick manner.

While this requires actual scriptwriting, the addition of visual elements takes a load off of our reliance on words, especially when it comes to educational content (which is what a good sales message really is).

This is due to what psychologists call the picture superiority effect. That’s a fancy way of saying that concepts are much more likely to be remembered if they are presented as pictures rather than words.

The trick is to identify the key concept in every sentence of your script, and pair it with a relevant and engaging visual element.

Notice I said to use “visual elements,” not “bullet points.”

Beyond being lame, bullet-point presentations fail to effectively harness the power of picture superiority and result in the same drivel that has been boring people to tears since PowerPoint was invented.

The occasional use of reinforcing on-screen text is fine, and can even be a desirable part of the mix. But even then, just say no to bullet points.

When to become a talking head

Turning the camera on yourself and addressing the audience is less effective as an educational presentation, but it has other uses.

People love to see what you look like, so video can be an easy way to get closer to your audience.

Plus, your facial expressions, mannerisms, and body language can communicate a lot about you that goes well beyond your message. (I’ll leave it up to you to decide if that’s a good thing.)

And, like it or not, if you’re an attractive person, providing video of yourself on a regular basis will be very powerful.

Psychological studies have shown time and again that we rate good-looking people as more intelligent, more competent, and even more trustworthy than relatively unattractive people.

It’s not logical, but neither are we when it comes down to it.

Remember the importance of editing and changing visual perspective often, even with talking-head videos. Three-to-six-second edits are too quick for a talking-heading video, unless it’s really short.

Make sure you switch things up on a regular basis using transitions and/or new camera angles to avoid losing the viewer’s attention — and to keep your video persuasive.

Previous article: What Makes a Good Writer? 6 Unique Traits
Next article: How to Get Your Book Published: Top Secrets for New Authors