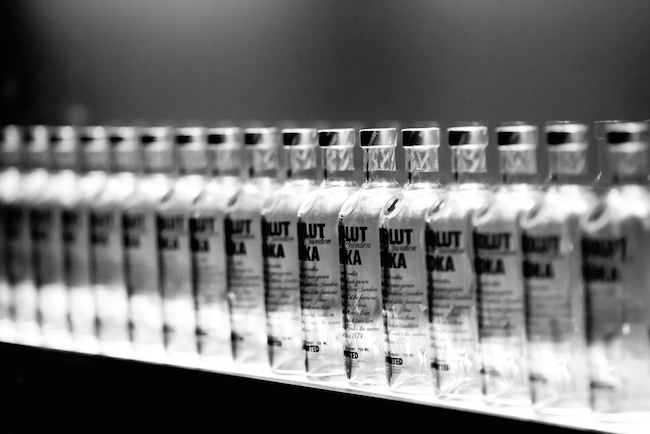 The Absolut Vodka advertising campaign has been running nonstop for 15 years, since 1981. This is remarkable because in the advertising business, campaigns can change as often as every year, as marketers attempt to keep their brands’ personalities fresh.”

More than likely you’ve run into one of these ads.

Absolut Clarity used a magnifying glass over the words “Made in Sweden” to bring attention to the fact that, unlike other imported vodkas, Absolut was not made in Russia.

Absolut D.C. was a bottle wrapped in red tape, because, you know, bureaucracy sucks, and Absolut is a great way to cope with that suckiness.

And Absolut Perfection displayed a glowing halo hovering over an Absolut bottle.

The ads made an impact.

Your college roommate probably had a collection hanging on the wall above his bunk. College librarians had to guard against delinquents excavating these ads with a razor blade (otherwise they would be de-Absolutized). And one ad could go for a few dollars alone at an antique store in Manhattan.

Not to mention a litany of awards followed the year-after-year success of this campaign, including induction to the American Marketing Association’s Marketing Hall of Fame.

Coca-Cola and Nike also enjoyed induction that year. Absolut, however, accomplished this feat without the benefit of television.

But here’s the million dollar question: did these ads convert? Did the agency behind the ads build a profitable brand?

That’s penetration. Impossible if that campaign had been interrupted. In fact, interruption would’ve been an unmitigated disaster.

You’ve probably seen the scene play out before …

A marketing role changes hands and that director or agency now feels the need to piss on the marketing landscape to mark his turf.

It’s not about sales, but ego.

Unfortunately, it’s one of the most senseless things to happen in advertising.

As conversion copywriter Joanna Weibe told me, when new management “swoops in to rescue a message that didn’t need saving” it usually does “more harm than good.”

Here’s the aftermath you have to deal with:

Getting a brand off the ground is not unlike trying to put something into space. A gargantuan amount of fuel is burned to resist that downward pressure of gravity: millions of pounds of solid propellent.

In the commerce world, there is a different kind of gravity, but it is equally strong. And there is reason for this massive downward pressure.

Consumers, according to Jack Trout, tend to use a fixed 150 brand items — without deviation. And this is why it takes, on average, over five years to get a two percent market penetration.

What this means is that if you release a brilliant but new message every year, a competitor can pass you with a less-than-brilliant, but consistent message. While their advertising message continues to soar, yours, on the other hand, stops at a certain height each year. Theirs keeps climbing while you are back at ground zero.

As Rosser Reeves said in his book Reality in Advertising about trying to buy “a bit of space in the memory box of the consumer”:

He is a beleaguered consumer, a confused consumer, battered by television, assailed by print, assaulted by radio, bewildered by posters. It is very difficult to get him to remember, and he is very prone, indeed, to forget. Penetration is volatile.

Reeves was writing in the early 60s. The mediums available to milk our attention have only multiplied.

There are only about three reasons you should change a marketing message. But we’ll deal with that in a minute. We still have some issues to deal with first.

Why resisting the temptation to change your advertising message is difficult

In our interactive world, we don’t want to wait five years. We like to think in months. Weeks.

Why should we have to wait? We can get results within hours of a campaign’s release. Run the A/B test, watch the dashboard light up, and pull the headline that’s tanking before we break for lunch.

My mind started going down this path when I came across a test by Wiebe for Mad Mimi. They ran a variation of three different pricing pages, small tweaks hard to discern by the uninitiated.

And even though they let the test run for 30 days, it was clear nine days in which one wasn’t going to win. Variation A started to drop like a bowling ball through a thatched roof. The other two continued on an upward trend, with variation C always keeping the slight edge.

This is an intriguing test. Makes you want to run out and test everything.

Keep in mind what they were testing was language on a pricing page, particularly on buttons. This was not an advertising message. You can tweak pricing and button language until your mother is blue in the face.

Furthermore, our own impatience is all the more aggravated because we have the technology. As Evgeny Morozova said in his book To Save Everything Click Here, we feel as if having the technology demands that things must improve. That we have to change.

One common side effect of this in the start-up world is the prolific ink spilled on such topics like:

Datasexuals, eat your heart out.

Don’t get me wrong. This is not a bad thing. I’m all for improvement.

But what often happens is the moment we see a downturn — no matter how small — we knee jerk into action.

And if that is with your advertising message, then beware.

Penetration requires a long obedience in the same direction. The difficulty for most of us is the long part. We want everything to happen now.

What you need is penetration — and time

Case in point: we have not touched our StudioPress landing page in over three years.

We’ve tested changes, but we keep coming back to this one. And there is a reason for that: we’ve discovered that people visit the page at least five times before purchasing.

That’s what’s called the “effective frequency“: the number of times someone is exposed to an advertising message before they buy.

Here’s another example. I’m listening to the free version of Spotify as I write this. That means I have to sit through ads about every fourth song. One ad that seems to be on constant rotation this morning is by Chick-fil-A.

I probably heard it a dozen times before I actually stopped what I was doing and listened to it. The next time it came around I paused it, grabbed my daughter, and said, “You got to listen to this. It’s hilarious.” She agreed. And now I’m thinking I know what I want for lunch.

That’s penetration. And it happened in as little as a couple of days.

Here’s a good way to think of penetration: how many people have a well-defined concept of your product in their head? Ten percent of the market? Five? One?

And if you want to improve penetration, then you need a clear and concise message that repeats.

As digital marketing expert and New York Times bestselling author Bryan Eisenberg told me, “Campaigns take time to work. Customers need a number of repetitions to the exposure of the ad over time for an ad to even begin to work.”

And what should your message say? “The consumer,” says Reeves, “tends to remember just one thing from an advertisement — one strong claim, or one strong concept.”

When it comes to marketing messages our tendency is to say eleven things. The consumer, however, will only remember one thing.

What exactly is an advertising message?

Inside our Authority community I come across this often: someone shares a marketing message and wants feedback. You click through to the landing page and they are stuffing everything they could possibly stuff into the landing page.

Which brings us back to Schwartz’s concept of one dominant desire I wrote about before:

Tap a single overwhelming desire existing in the hearts of thousands of people who are actively seeking to satisfy it at this very moment.

Your consumer, yes, is a complex animal. Urges tug from the inside, demands assault from the outside. There will be many desires and pain points that your consumers will have.

But what matters is finding the one that reaches the widest audience possible — and punching the hell out of that message.

It starts in the headline. And permeates the rest of the copy.

Look at our current Copyblogger landing page headline: “Solutions for Smarter Content Marketing.” There is only one big idea that permeates the rest of the copy. 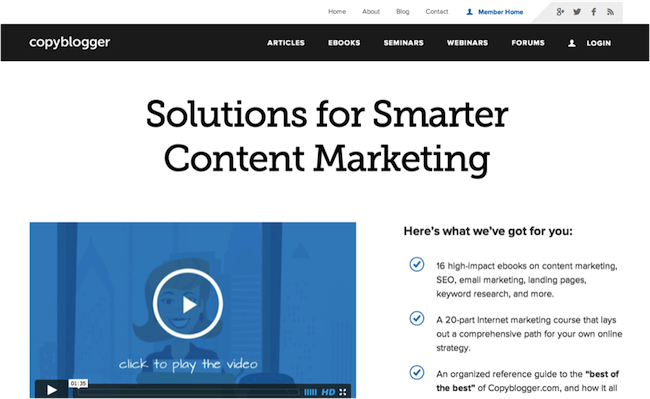 Watch the two-minute video on that page and you get the same message.

Click through to the Authority registration page and there it is again: “smart.” 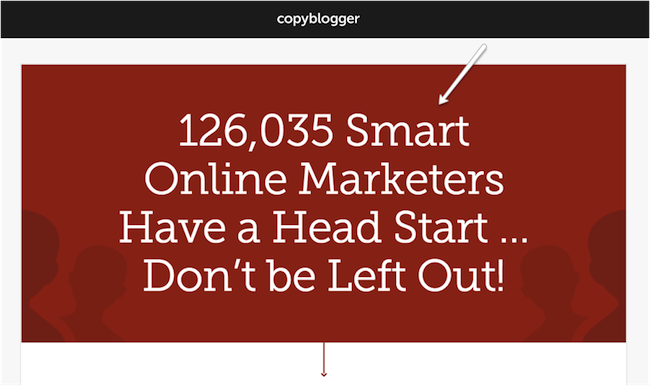 And you see it in language like “education” and “library.”

The same theme is being repeated and supported so there is no confusion behind the benefit the reader will enjoy when they become Authority members: you will become a smarter content marketer.

How to support that one message

Yes, add depth to the claim. Add color and dimension.

But all these facts (which you show rather than tell) should support the main claim. All the units of a campaign should build one striking and memorable claim. You should always come back to that one theme. All the facts should point to that one theme.

Gather your energy into a tight coil. Present the consumer — not with a confused message, do not put him in this predicament — with one compelling claim. And make it easy to remember.

Nobody in the crowd of 200,000 who heard Martin Luther King doubted the message he delivered October 28, 1963 on the steps of the Lincoln Memorial. In fact, you didn’t even have to pay attention to the whole message. You knew he had a dream. And that dream was about freedom for everyone.

All the components of his message fused together into a single and solitary point. He pounded home one theme, with variation. Your landing page copy should do the same thing.

Which brings me to our final discussion: at what point does an advertising message start to wear itself out?

How to tell if a message has worn itself out

There comes a time, indeed, when your message is failing.

“As for changing an advertising message,” notes Weibe, “we’d recommend our clients — and anyone — consider new messaging options when the control message isn’t generating the results it needs to.”

What sort of results?

As of 2013, Absolut was still running their TWBA-inspired campaign. That all changed after the summer when they broke with the past and introduced a new campaign: Transform Today.

Over 30 years is a pretty good run for an advertising message, one that started with an ad created by Andy Warhol. But this change is in line with today’s world where print is not enough (or simply a joke).

Will “Transform Today” allow Absolut to penetrate its intended market, the Millenials? Only time will tell.

In the meantime, I’ll be inhaling a Buffalo Chicken Sandwich.

Editor’s note: If you found this article useful, especially if you liked the quotes from Rosser Reeves, now is a great time to read (or re-read) this classic post from Demian’s archive: 13 Damn Good Ideas From Dead Copywriters.

Previous article: Why You Should Curate Content (And How to Do It Right)
Next article: Is Metagaming Silently Killing Your Marketing?