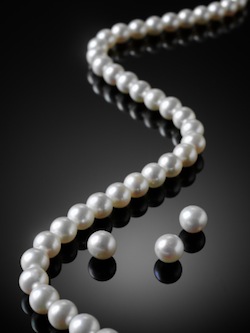 How is it possible that a string of fake pearls, purchased at Bergdorf Goodman for about $25, eventually sold at auction for $211,000?

Well, it certainly helps that Jacqueline Bouvier Kennedy had worn this particular necklace in almost every historical photograph featuring herself and her husband President John F. Kennedy.

As Lynda Resnick, the woman who later bought the pearls interestingly said, the pearls had become “the icon of the icon.”

But they were still cheap baubles on a string, a handful of glass beads and nothing more.

Were they really worth that much just because Jackie had worn them?

The answer to this very important question lies in the set-up, the payoff, and the open loop.

How you set yourself up without knowing it

The events and drama associated with a place, day, or item inevitably mark that item with more than symbolic significance.

Jackie’s style, her much-photographed life, and her presence as an icon in both our history and national psyche have all become associated with those pearls.

It’s also possible to do the same in your copywriting. You can set up an action, place, thing, or event to carry its own emotional charge — and pay off your readers’ investment later by releasing that emotional charge for effect.

Naturally, it’s hard to orchestrate a Jackie Kennedy-level emotional investment. Historical events of that caliber don’t come around every day — and they’re often decades in the making.

But you don’t need history; you make the same emotional, irrational investments in events and things all the time.

And you’re willing to pay more to engage with them.

The same applies for events that carry emotional investment.

When you celebrate birthdays, you’re willing to pay more money for food, presents, and outings than you would at other times even though that day is objectively no different than any other day of the year.

One of the reasons we’re willing to invest so much in these kinds of events and objects (financially and emotionally) is that returning to an already emotionally charged item, place, or day inevitably spotlights whatever has changed in your life from one experience to the next.

The payoff lies in being able to re-experience all the feelings that were initially set up when you first encountered that situation or that object.

It’s why you can’t help but reminisce over the last year as New Year’s Eve approaches, or why you get a little teary-eyed as you mark a new pencil etching of your kid’s height above the dozen others from the years before.

The examples mentioned above happen more or less naturally. But it’s also possible to create the set-up of emotional attachment and recoup the payoff by capitalizing on that emotion.

One of the best and most relatable examples is film.

Movies are designed to give you an emotional set-up and then offer you a payoff — a release — of that emotional involvement so you feel satisfied by the entire experience.

Get your audience engaged in your payoff

Want to see the set-up and payoff in action? Let’s take a masterful example from Pixar’s film UP.

If you’ve never seen UP before, the opening eight-minute set-up is a masterful small film in itself.

Let’s take a look at some of the biggest set-ups and pay-offs at play:

The payoffs for those set-ups don’t end at the conclusion of those 8 minutes, either.

Throughout the entire movie, the set-ups are revisited again and again, giving the audience a payoff on their emotional involvement every time.

Clearly, the technique worked well for UP: it received rave reviews (many of them lauding that iconic 8-minute clip) and great box office numbers.

So how can you use the same techniques of set-up, payoff, and the open loop to get people to invest their emotions and their money in your own ventures?

Setting up your copywriting for a payoff

To create the same kind of set-up and payoff the movies do, you need to imbue your copywriting with emotion.

Here are a few of the most effective techniques for doing that:

We’re not talking about your standard rags-to-riches narrative.

The average spiel has no emotional resonance, no artistry in the telling. It’s usually just a straight-up, “I didn’t have two cents to rub together, and now I own three homes and a Porsche. And you can, too!”

That’s a cheap way of getting across the before-and-after set-up and payoff. There’s a much better way to accomplish this.

Use a symbolic place, person, event, or thing that’ll highlight the change in your fortunes a bit more elegantly.

Tell about the time your little sister gave you her old computer because you couldn’t afford a new one after yours crashed.

Then tell about the moment your phone rang as your sister called to thank you for the brand new 17’ Macbook Pro you sent her. Tell us about the way your old computer still sits in a place of pride as your “inspiration computer” that you use to write the really important projects.

If you want to make it real, give us a real object to feel emotionally attached to. Without giving us that emotional involvement, we can’t feel the payoff when the turnaround happens.

2. Slip a (seemingly) throw-away detail into your opening to increase the symbolism of your closing image

Naomi Dunford of Ittybiz wrote a post on what to do when family or friends failed to take you seriously because you work from home.

Her audience is a huge crew of small-business owners. Some of them work from home, some don’t, but most probably assumed that the term “work from home” encapsulated any business that doesn’t have all the traditional accoutrements we tend to associate with “real” businesses.

“Work from home” could mean “having a one-person business that has an office away from home.”

It could mean “working on a laptop in a coffeeshop.”

It’s just a handy placeholder that lets her readership know she’s talking about them.

At the end of the piece, Naomi used this immortal line: “You know who else works out of his home office? THE PRESIDENT OF THE UNITED STATES OF AMERICA”

Booyah! A huge payoff that wouldn’t have happened if she had said “ittybiz owners”, as she often has for other posts.

“Work from home” seemed innocent enough, but her choice of powerful trigger words made the emotional payoff immense for a readership that needs to hear their work is valuable and worthy.

3. Use a created symbol as a key part of your narrative’s turning point, and repeat it as part of your call to action

Read the following invitation/sales letter (another marketing masterpiece penned by Roy H. Williams) and ask yourself, why is the call to action so intriguingly compelling? 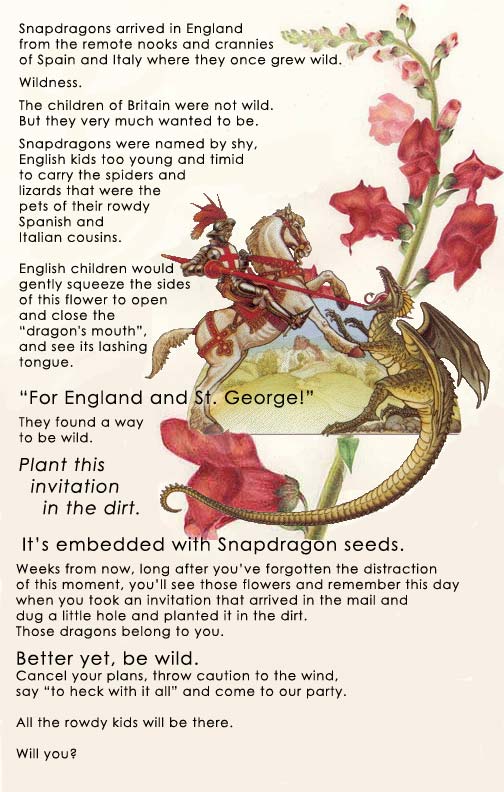 Drop your answers in the comments below. And this time, I won’t spoil your chance to shine by giving you my answers.

I’ll let you close the loop on this one.

Previous article: 109 Ways to Make Your Business Irresistible to the Media
Next article: The Content Marketing Question You Need to Answer … Now