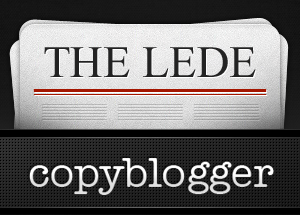 This week on The Lede …

If you want to grab even more useful links (beyond those that make The Lede), follow @copyblogger on Twitter.

Where to Place Your Calls to Action
You know that old, unquestioned advice that you must place your important calls to action on your website above “the fold”? Well … think again. Mr. Tennant publishes a couple tests that may reveal otherwise. More accurately, they reveal that you need to Always Be Testing.

How to Type Faster on the iPhone
I’ll admit it, if I could get away with using the iPhone as my primary computer, I’d do it. I’m actually almost there, but for a few little details (again, I call to all iOS developers for a beautiful, record-to-publish podcasting app). Anyway, whether you’re gonna go my way here or not, we’re typing a lot on these little machines now, and it’s only going to get worse (or better). Here’s a little-known native function on the iPhone to help you get those mobile words-per-minute up.

John Gruber on Charlie Rose
This short segment from Charlie Rose covers the release of the iPhone 5. Whatever. What struck me were the guests invited to sit at that legendary table. On Charlie’s left was David Pogue, technology writer for The New York Times for the last twelve years. On his right, John Gruber, proprietor and sole contributor to his own 10-years-old site Daring Fireball. Mr. Gruber has come to prominence in recent years, covering Apple and technology in varying formats on his site. This appearance is yet another example of what’s becoming a long line of mainstream respect for his completely independent work. The point: Much is now possible for the person willing to consistently create and distribute well-crafted and useful content to an audience, over a long period of time, on a site he owns. Well done, Mr. Gruber.

Need Some Inspiration? Here’s 450 Free Audiobooks …
You may not have enough years left to get to them all, but you can certainly start your walk down to The Crossroads right now. My grandfather would not have believed that this kind of resource could ever be so accessible, can you? What will you do with it?

Guy Kawasaki: Google+ is the Macintosh of Social Networks
Despite the PR whipping Google+ takes on a regular basis, it continues to steamroll along, growing in both numbers and overall importance to your content goals. Mr Kawasaki wrote a book about the social network, comparing it to that other little laughed-at product he evangelized all those storied years ago … the Macintosh computer.

The Definitive Guide to Starting a Profitable Email Newsletter
Mr. Juntilla has written an article that delivers on the headline. If you’re looking to get started with an email newsletter (and yes, you should), he answers most of the very first operational questions and issues you’ll come up against.

The Best Way to Learn Marketing
Not much to add here, because Mr. Godin does not bloviate. Just go ahead and click that link up there for some of the best (general) marketing advice you’ll ever get …

Miss anything on Copyblogger this week?

Previous article: How to Build a Mobile Responsive Website With WordPress
Next article: Get Paid What You’re Worth: 37 Negotiation Tactics for Every Freelance Writer