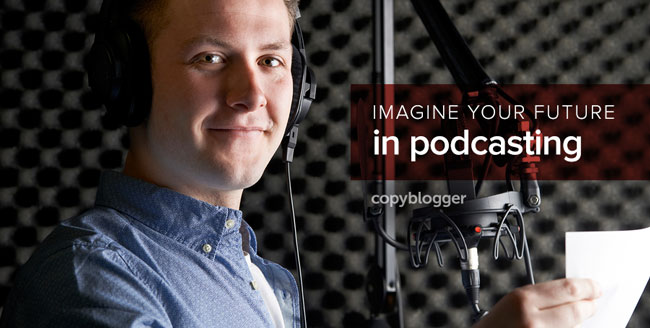 Let’s start with a question you know the answer to:

What do you need to build a successful online business today?

Well, you start with a growing, loyal audience who views you as an authority. Content Marketing 101.

Now another question you probably can answer:

How do you stand out from the crowd, cut through the noise, and build an authentic connection with an audience when there is already so much content out there and more coming every day?

But the reality of the content abundance all around us does mean that we cannot blend in and expect to stand out.

We must attract attention, be useful, and build trust.

In other words, we need to be remarkable.

And there is no better way to create an authentic connection with an audience than through a remarkable podcast.

Now I’ve got a question I bet you don’t know the answer to … yet.

If you launched a podcast today about your favorite topic in the entire world, where could you be five years from now?

Five years ago, I did launch a podcast about my favorite topic in the entire world: Indiana Hoosiers basketball.

I didn’t really know what I was doing — I was nervous and a little afraid — but I launched it anyway. And somehow I convinced a couple of guys I’d never met to co-host with me.

Five years later, The Assembly Call gets hundreds of live viewers, thousands more on the podcast, and is simulcast live on terrestrial radio.

Yeah, I host a radio show now. Who’da thunk? (That was fun to type.)

We also have an official internship program with the IU Sports Media school, and we are entirely listener supported.

Imagine if I hadn’t made that choice to launch the show five years ago, well before I was ready.

Actually, I’d rather not. I’m quite fond of what has transpired since.

Where could you be in five years if you launched your podcast in the next 30 days?

You know, come to think of it, five years is a long time to wait.

Let me rephrase that question.

If you launched a podcast today, about a topic strategically chosen to help you build an audience that could build a business, where could you be 18 months from now?

Eighteen months ago, he did launch a podcast about a topic strategically chosen to help him build an audience that would build his business: the entrepreneurial mindset.

He didn’t really know what he was doing — he was nervous and a little afraid — but he launched it anyway. And somehow he convinced a sponsor to support him before he’d even published an episode.

Eighteen months later, Hack the Entrepreneur is one of the top business podcasts in the world, gets tens of thousands of downloads every episode, and Jonny was able to repurpose material from the podcast into a book that became an Amazon bestseller.

Yeah, he went from unknown podcaster to bestselling author in 18 months. (I bet that was fun for him to read.)

Jonny also recently launched a paid membership community and has now interviewed more of his business heroes than he can probably count.

Imagine if he hadn’t made that choice to launch the show 18 months ago, well before he was ready.

Actually, I bet he’d rather not, as I know he’s quite fond of what has transpired since.

Where could you be in 18 months if you launched your podcast in the next 30 days?

You know, 18 months is a lot less than five years, but it’s still a while to wait.

Let me rephrase that question.

If you launched a podcast today, about a topic you are passionate about and that was chosen strategically to build an audience that could build an online training business, where could you be six weeks from now?

While you’re thinking, I’ll quickly share my story of working with Jonny.

On April 1, 2015, we launched a podcast about a topic that we are passionate about, and that was chosen strategically to build an audience that could build an online training business: podcasting.

At this point, after our individual podcasting successes on our own, we had a much better idea of what we were doing, but neither of us had ever built a course before. So, we were still nervous and a little afraid. But we launched anyway.

Less than six weeks later, on May 8, 2015, The Showrunner was one of the most popular Management & Marketing podcasts in the world, and our course, The Showrunner Podcasting Course, had grossed more than $75,000.

Yes, we had gone from nervous, sweaty-palmed novices to respected podcast instructors. (It wasn’t easy, but it was incredibly rewarding.)

And both the podcast and course kept growing. The Showrunner Podcasting Course would gross nearly $175,000 by August 20, when we closed new registrations for 2015.

Imagine if we hadn’t made that choice to launch the podcast on April 1 and launch the course just a few weeks later.

Actually, we’d rather not. We’re both quite fond of what has transpired since. 😉

Where could you be in six weeks if you launched your podcast in the next 30 days?

That’s not a long time to wait.

What will your story be?

Those are just three podcasting stories. My story, Jonny’s story, and our story together.

But the subtle secret about this post is that it’s not about us — it’s about you.

I told you those stories because I want you to understand the podcasting paths that Jonny and I have walked, while also realizing that there isn’t much separating you from me or you from Jonny.

And if launching a podcast can have that big of an impact on our lives, creating relationships and business opportunities we never thought we’d have, then it can do the same for you.

But so did we.

The difference is that we did it mostly on our own, especially in the beginning, so it took longer for us to succeed than necessary.

We don’t want you to go through that.

Podcasting is fairly simple, but that doesn’t mean it’s easy. Nor will we sugarcoat it and tell you it is.

But you know that. Nothing truly rewarding is easy. Anything worth having requires plenty of blood, sweat, and tears. And maybe even a little delayed gratification.

That’s what it will take to build the podcast audience that can build your business.

But boy is it worth it.

And you’re less than 30 days from getting started, if you choose to be.

Take the first step right now — but don’t take it alone. Join us in The Showrunner Podcasting Course.

Jonny and I relaunched it this week, and we’d love to have you join us.

Let’s answer the question together …

What could happen if you launch a podcast in the next 30 days?

Are you ready to find out?

Previous article: How to Add Suspense to Your Stories and Dramatically Improve Your Content
Next article: 10 Rules for Creating Content People Can Trust [SlideShare]