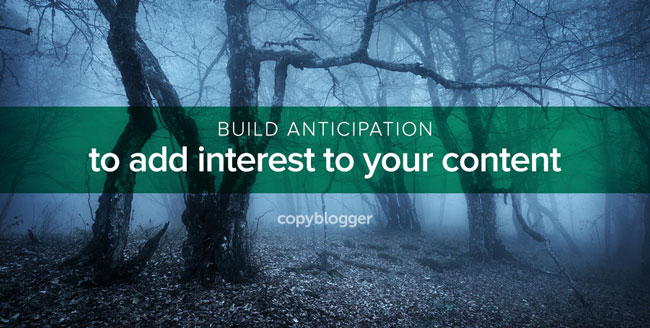 At a TED conference in 2008, music conductor Benjamin Zander talks about the story of Shakespeare’s well-known play, Hamlet.

In Act One, scene three, Hamlet finds out that his uncle killed his father. Now Hamlet must have his revenge.

As the play progresses, Hamlet almost kills his uncle, but pulls himself back. He has many opportunities to get rid of his uncle, but somehow doesn’t finish the job.

So, is Hamlet a procrastinator?

“No, otherwise the play would be over, stupid,” Zander says. “That’s why Shakespeare puts all that stuff in Hamlet — Ophelia going mad, the play within the play, Yorick’s skull, and the gravediggers. That’s in order to delay — until Act Five. Then, he can kill him.”

This is the power of suspense in storytelling: the end seems almost inevitable, but then there’s more — to keep the story going.

Let’s explore how this concept can dramatically improve your own storytelling and keep your audience completely focused on your content.

In the video below, Zander explains how composers structure their music. They know the end point — and the notes they have to put in between the beginning and the end. Yet, they don’t quickly get to the end. Instead, they create suspense.

As Zander describes it:

In that rapid-fire paragraph, Zander describes how Chopin has created suspense in music.

Chopin knows that the final note has to be an E. He almost gets to the E note — and then pulls away. He does this repeatedly and deliberately, knowing fully well that we know the final note, but we have to wait.

But how do we add suspense to our writing?

Let’s say we want to talk about the power of preparation, and we have a great story about Michael Phelps competing in the men’s 100 metre butterfly event at the 2008 Summer Olympics in Beijing.

Watch how the story unfolds with little bits of suspense. We’re not going to “hit the E note.” We’re putting in tiny elements that force the reader or listener to savor the moment.

Getting from one point to the other may seem to be the goal of the story. After all, the story’s not supposed to hog the spotlight; it’s just an introduction that leads to the main content. And yet, we can’t be frantic while getting to the finish line.

Look for the text in bold to see where the suspense shows up:

A few minutes before each race, just as his name was announced, he’d step on the starting block, then step down. He’d swing his arms thrice as he’d always done since he was 12 years old. Then, he’d step on the block, get into position, and when the gun sounded, he’d leap into the pool.

But this was no ordinary pool — this was the 2008 Summer Olympics in Beijing. And it was no ordinary quest for gold. Michael Phelps was aiming for eight gold medals — something no athlete had accomplished at any Olympic games.

However, the moment Phelps hit the water, he knew something was terribly wrong. Water surged through his leaky goggles, blinding him.

As the other swimmers raced alongside him, Phelps was unable to see the bottom of the pool. At the halfway mark, Phelps was trailing behind his arch rival, Milorad Čavić. It looked like Čavić’s threat of beating Phelps in this event was about to come true.

But Phelps isn’t in Beijing anymore.

He’s in a darkened pool — in Michigan — running through his training routine. His coach, Bob Bowman, believed that Phelps needed to be ready for any surprise. He’d trained Phelps how to react to a goggle failure, both physically and mentally.

And now Phelps is back in Beijing, counting the strokes.

But were they cheering for him or for someone else? He couldn’t tell because he was swimming blind.

Nonetheless, he made a huge surge with his arms outstretched, hitting the Omega touchpad.

Had he won? Or was he in second place?

When Phelps finally looked up at the scoreboard, his face broke into a grin. He beat Čavić by one hundredth of a second.

Phelps had the gold — and a new world record.

Sharpen your story with suspense

Here’s an outline of the story with suspense markers:

It’s an action-packed race to the finish, and yet, at one point there was a severe pullback. Phelps was no longer pounding the water. There was not a spectator in sight. He was back in Michigan, in the darkened pool, away from all the chaos.

That bit — that tiny bit — sharpens the story, doesn’t it?

The reason that part is so magical is because it changes the direction of the story and creates a counterflow.

Storytelling is more than just conflict

The moment you create a factor of contrast, you’ve got your audience’s attention. But the moment you add suspense, you take your story to a whole new level.

You do what Shakespeare, Chopin, and many smart creative people have done:

How do you use storytelling — analogies, personal stories, and case studies — in your content? Read this excerpt from The Brain Audit to discover how storytelling plays out in everyday content marketing: http://www.psychotactics.com/xbrain

Previous article: Why Lazy People Make the Best Content Marketers
Next article: What Could Happen if You Launch a Podcast in the Next 30 Days?