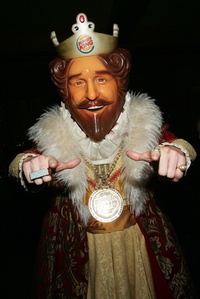 To me, that seems like a silly question. “Content is king” is a metaphor, but apparently not a very good one.

A good metaphor creates instant understanding. Given the amount of confusion and debate the phrase “content is king” kicks up, it’s not doing all that great a job in the instant-understanding department.

I think it’s smarter to say that content is indispensable. It’s what people go online to find, and it’s what Google loves. There are only a few online marketing models that don’t require valuable content, and those few are getting tougher by the day, and result in no long-term assets.

But if you really want to stick with this “content is king” thing, let’s see if we can tease out the analogy a bit.

Because it has no kingdom. It may be of royal birth, but it’s not on the throne.

In fact, the throne is ruthlessly occupied by Queen Inattention. She rules the online land with an iron hand, and her subjects become more loyal to her daily.

Your content has a right to the throne thanks to its valuable information, clever hook and killer headline. But brave and loyal allies are needed to create an insurrection against Queen Inattention. These allies are not impersonal Facebook “friends,” they’re real friends and colleagues, and they believe in you and your content.

These allies work with you to inform the masses of the coming of King Content. They link, bookmark, Digg, Spinn and Tweet the defiant message…

Queen Inattention is going down.

Finally, as the masses recognize the royal birthright of King Content, they rise up in revolt. Queen Inattention is deposed and exiled to a lonely island, while King Content ascends to the throne he so rightfully deserves.

Now that King Content is in charge, he can’t rest easy. If he cannot inspire his subjects to action and fill the royal coffers while improving the well-being of the entire kingdom, all will be for naught.

And word just arrived that Queen Inattention has escaped her island exile.

Now, this may well be the goofiest thing I’ve ever written. But hey, I’m not the one who came up with this “content is king” thing. I’m just working with what I was given.

The point is… it’s social media. Yes content is indispensable, but the entire environment is powered by people. If you have no people on your side, your content isn’t king… it’s just a lonely loser with delusions of grandeur.

Content marketing is all about communication. You need to attract the attention of prospects and communicate your subject matter expertise.

But before you can do that, often you’re going to have to communicate the value of your content to friendly allies and maybe even a stranger or three. And finally, you’ve got to be able to take that crucial next step and communicate why your readers should do business with you.

When you look at it that way, isn’t communication king? Perhaps so, but these types of metaphors tend to be a royal pain.

P.S. Gyutae Park just let me know he made a similar analogy last year. Check out his article here.

Previous article: BlogWorld 2008 (The Secret Discount Code is…)
Next article: How to Profit From Testimonials… Even With No Testimonials!