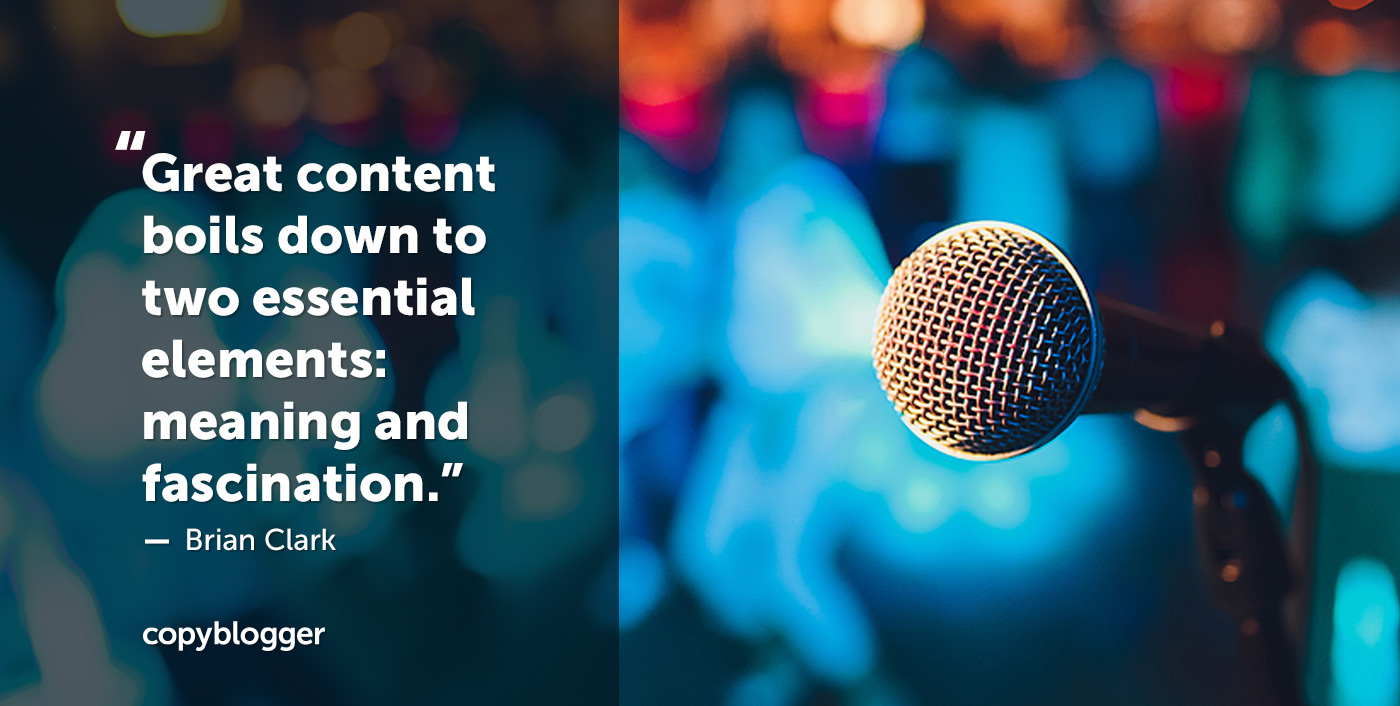 When it comes down to it, “content” is simply information.

And in an age of information (and opinion) overload, your content can contain incredibly valuable information and still be easily ignored.

This is the opposite of the “clickbait” problem. In that case, you have a compelling headline that leads to worthless information.

The ideal scenario is to have a great headline (effectively a promise to the prospective reader) that delivers on, and hopefully exceeds, the expectations created by the headline.

Ultimately, what you say (the information) is the most important thing, because the wrong information is simply not meaningful to the people you’re trying to attract.

But how you say it is still indispensable in an environment overflowing with information — both of high and (too often) low quality.

Meaning relates to how well the information addresses the problems and desires of your specific audience. Fascination is the hook that makes the information compelling, engaging, and memorable.

When it comes to selling through direct response copywriting, professional writers know they need to find the right combination of meaning and fascination to overcome the natural skepticism and resistance to being “sold” to.

They dig deep to find the hidden hook that will elevate the piece of content to a must-read for the right prospect, which in turn will lead to more people investing in the product.

Guess what? In the current online environment, there’s now a natural skepticism and resistance to simply consuming your free content. In essence, you have to “sell” people on investing a precious resource — their time — in what you’re sharing.

Let’s look at two articles that effectively contain the same core information and takeaways, and yet are approached in very different ways. They both involve a brief section from a 2014 interview with Jerry Seinfeld on Alec Baldwin’s Here’s The Thing podcast.

Here’s what Seinfeld said about the huge success of his NBC sitcom:

“Let me tell you why my TV series in the ’90s was so good, besides just an inordinate amount of just pure good fortune. In most TV series, 50 percent of the time is spent working on the show, 50 percent of the time is spent dealing with personality, political, and hierarchical issues of making something. We spent 99 percent of our time writing. Me and Larry [David]. The two of us. The door was closed. It’s closed. Somebody calls. We’re not taking the call. We were gonna make this thing funny. That’s why the show was good.”

The first time I encountered this anecdote was in early June 2017 thanks to an article by Cal Newport entitled Jerry Seinfeld’s Closed Door, which I included in an issue of my newsletter Further. If you’re not familiar, Further is where I share the best stuff I’ve come across each week when it comes to health, wealth, and personal growth resources for Generation X.

The article’s headline alone is lacking in both meaning and fascination (unless you’re simply intrigued by anything related to Jerry Seinfeld). What about that closed door is meaningful? You may be a bit curious, but that might not be enough for you to invest your valuable time in a click, much less a read.

Which prompts the question, why did I bother to read it? It’s simply because I’m a fan of Newport, and I know he writes about “deep work” and purposeful productivity almost exclusively.

Side note 1: This is the great thing about developing trust and authority with an audience. It’s the same with Seth Godin’s widely read articles that have famously vague headlines. It’s important to remember that for most of us mere mortals, if you want to please your existing audience while concurrently growing it, you need to invest the necessary time into demonstrating both meaning and fascination in your headlines.

A few weeks later, I happened upon an article on Medium entitled Jerry Seinfeld’s 3.1 Billion Dollar Writing Trick by Ryan J. Pelton. I knew instantly what it was about, having read Newport’s article. But the headline was chock-full of meaning and fascination compared to the title of its predecessor.

Writing Trick is what’s meaningful to Pelton’s audience of fellow writers. And 3.1 Billion is the fascination, especially for people trying to earn a living with their words.

The dollar amount relates to the staggering amount of money Seinfeld has pulled, largely due to lucrative syndication licensing. Newport mentions the $3.1 billion as a simple piece of information buried in his article, while Pelton keyed into it as the hook while also pairing it with specific meaning for his audience.

Here’s what will really bake your noodle: I’d bet a decent amount of money that Pelton read Newport’s earlier article and was inspired to write his own version specifically tailored to his ideal prospect. And now I’ve taken inspiration from both for this article.

As Austin Kleon is famous for asserting, steal like an artist.

Side note 2: Universal meaning and fascination are exceedingly rare, in that it all depends on the particular audience. Some people may indeed regard Pelton’s article as “clickbait” simply for employing a sensational amount of money as a headline hook. Others might object to describing a closed door policy as a writing “trick.” What’s important is that it worked for Pelton’s audience (based on reader response over at Medium). It’s your job to know what works for your people, and how best to write for them.

Which brings us to the pertinent question: How do you find the right hook?

How to find the hook

Professional copywriters know they have to dig deep to find the hook for a particular promotion. You definitely can’t rely on the client to tell you, because the fascination will likely be something they take for granted and consider inconsequential.

Thanks to the curse of knowledge, it’s even worse when you’re writing on your own behalf. In fact, every time you catch yourself thinking, “Everyone knows that,” stop right there and take a hard look at it.

Other times, you just need to dig deeper after finding a starting point.

Let’s say you found that interesting Seinfeld quote by listening to the original podcast episode, without the aid of Newport or Pelton’s article.

Doing additional research is how you’ll find a fascinating piece of information that intersects with the anecdote. There’s nothing about how lucrative Seinfeld was in the excerpt from Baldwin’s podcast interview, only that the show was “successful,” which is fairly obvious.

A quick review of the Wikipedia page for the show reveals estimated syndication revenue of $4.06 billion as of 2017, which is fairly amazing. Since there’s no citation for that amount, though, a smart writer will then Google “Seinfeld syndication” and find multiple recent sources that instead say $3.1 billion.

And there’s your hook.

Finding a hook, angle, or fascinating fact comes down to digging through raw “information” in order to create compelling content that transcends mere facts.

It’s a creative exercise, and as with most inspiration, it doesn’t arrive by staring wistfully out the window. You get it by rolling up your sleeves and doing the work your competition won’t.

Previous article: How to Love Rejection (No, Really)
Next article: 11 Creativity Routines that Make Your Day More Rewarding