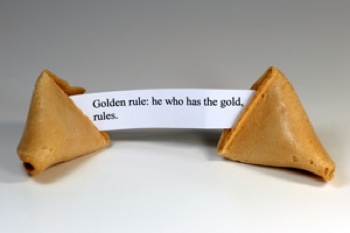 Roughly translated across cultures, it boils down to:

Treat Others as You Wish to Be Treated.

Those are words to live by, even online. But the truth is, when it comes to online marketing, you’ve got to treat people better than you wish to be treated.

So the Golden Rule of Online Marketing is:

Give Something Valuable Away in Order to Sell Something Related.

Simple enough, but what does it really mean?

After giving it a lot of thought, I’m afraid the phrase “social media marketing” is a tragic mistake. It gives people the wrong idea.

Some people see social media as an opportunity to shove a business card in your hand with nary a “hello” first. It’s like getting bent over at a Tupperware party without a hint of verbal foreplay.

The amazing thing about social media is the ability to own true media assets. To reach niche audiences on your own terms, for your own ultimate benefit.

As long as you provide the audience a benefit first, that is.

In traditional media, content producers give people something they want in the form of entertainment or information. Then they sell access to those people to advertisers who want to sell something to those people.

In social media, smart content producers understand that they play both roles. They provide people something they want and sell something… but in this case, what they sell is something extremely relevant to the content, and therefore, to the audience.

Being a new media content producer naturally creates awareness for your products or services. That’s what marketing is supposed to do, and that’s how it’s done effectively online.

An Example: How Daniel Can Sell More Art

Daniel Edlen sells really cool portraits of rock stars hand-painted in white acrylic on an actual vinyl recording from that artist. I got to know Daniel on Twitter, and now own renditions of Janis Joplin, Jimi Hendrix, Jim Morrison and Kurt Cobain portrayed on classic albums from each.

Along the way, Daniel asked me how he could sell more of his stuff.

I get this question a lot.

Daniel has an interesting marketing problem. He creates unique stuff (like he’s supposed to), but suffers from this one simple fact:

No one knows they want his stuff until they do.

No one likely searches for rock stars painted on vinyl. I certainly didn’t.

He needs an effective media vehicle to drive his sales to a whole new level. One where he converts a large number of followers into a smaller but vibrant group of customers who begin to market for him.

So the Golden Rule of Online Marketing is especially pertinent here. What can Daniel give away that has value and also stimulates desire for his art?

Daniel blogs, and I personally like reading his stuff. But it won’t work the way he wants.

What do people who buy this type of art really want? What drives the desire to hang this art on one’s wall?

I’d say it’s mostly nostalgia and identification. An opportunity to gaze upon a vivid memory from the past, and to place yourself within the sphere of that sensation.

So what kind of content puts that person in the mood?

I know it sounds simple, and that’s a good thing. People want what they want, and our desire as marketers for complex answers is an insecurity, not a virtue.

Rock trivia is something huge amounts of people will opt-in to receive daily. There’s a demonstrated desire for this type of content, so you’re not forcing anything.

You now have their attention, which is critical, but there’s a lot more to it.

Facts and little-known details about rock stars and the lives they lead put people in a certain mood. If nostalgia and identification are what you’re really selling (as Daniel is), then you’ve got to put a bunch of people in the mood within one click of your solution.

This is how Daniel could sell a lot more art. It may not be the only way, but I’m betting this way works.

What Are You Really Selling?

The day you make a breakthrough is the day you understand what you’re really selling. What’s the ultimate benefit people get from you?

When you understand that, you can make media that works as marketing. Without it, you’re likely just pissing people off.

And please… until you get it, stay away from me at Tupperware parties. Yikes.

Previous article: It’s the End of the World as We Know It (And I Feel Fine)
Next article: Screwed Up Your Blog? Here’s What to Do