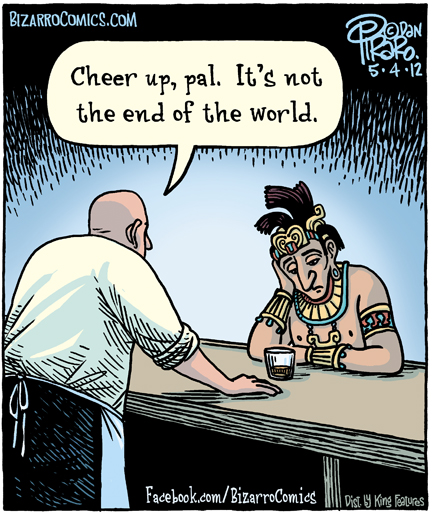 Well, dawn has broken on December 21.

Peeking out of my curtains, I see no zombie apocalypse, no Mayan-speaking vengeance deities, no vampires or trolls or angry visitors from other planets.

Granted, the day is still young, but I’m going to call it good.

So we made it.

After a very, very hard end of the year. A lot of extremely bad things happened, and most of us are still reeling a little.

But we’re still here. And once we’ve ordered a Gaping Void I survived the Mayan Apocalypse t-shirt, apparently we still have to make a living for the rest of our lives.

Here are my thoughts and suggestions for some big themes for next year. Business is moving, and if we move with it, we can make amazing things happen.

Here’s how I see it.

These are strange times, unpredictable and fast-moving.

Which is stressful. But it also opens up tremendous opportunities.

Maybe 2013 is the year you entertain the idea that you don’t have to live anyone else’s idea of a “normal” life, or work at what you always thought was a “normal” job.

Maybe this is the year you start something of your own, or make the company you’re in now smarter and better.

There’s something you want to see more of in the world. This just might be the year you start taking your dream seriously.

2. Start singing with your own voice

The one thing the Internet doesn’t need is any more clones.

What we don’t have enough of yet is you. The best version of you — the smartest, most passionate stuff you have to offer. We’re waiting for that.

I’m not talking about throwing public tantrums in the name of “authenticity.” We have enough train wrecks to gawk at.

I’m talking about being honest enough to quit pretending you’re someone else, and to quit being nice at the expense of telling the truth. To recognize that you have something unique and valuable to offer.

Hone the hell out of that, and bring it forth.

As Brian said, 2013 will be the year of the online writer. The coming content revolution needs an army of professional, serious wordsmiths who know how to create something special.

Are there plenty of companies who still don’t get it, who will try to get by with penny-a-page junk content?

Sure there are. And those companies will fall. Don’t worry about them.

Find the ones who know what they should be doing, but have no idea how to do it. They’re dying to make a connection with someone like you, someone who can write the words that will inspire their audience. We’ll be talking more next year about how you can find the clients who are hungry for smart, savvy writers.

You know a lot. You might not always feel it, but you really get how the social web works, and you know the difference between good writing and lazy writing.

Are there people who know more than you do? Always.

Can you find some people who know a lot less than you do, who could really use your knowledge and abilities?

Go find those people and make yourself useful solving their problems. That’s the best foundation for any business.

You can be cool, or you can create something worth talking about. It’s hard to do both. (We’ll have to assume for the moment that you are not Steve Jobs.)

Turn away from companies or colleagues who think they can justify shady behavior by saying “It’s just business.” Business crumbles without trust and respect.

Turn away from the hipster crowd who are afraid to talk about anything that isn’t new and shiny. Being of real service means sifting through the noise to figure out what’s going to endure.

The ones who say it’s a dog eat dog world? Yeah, those are dogs. You don’t need them.

As we often do, the Copyblogger team will be taking a brief break at the end of the year to enjoy some family time.

One of the things we do is get together with some laptops and pads of paper and a whole bunch of coffee and play around with interesting ideas we can implement in the upcoming year. I encourage you to do the same.

Hit your favorite coffee shop. Sketch out some ideas. Make them big or small, but make it something that excites you.

What could you do for a living in 2013 that would really turn your crank? That would genuinely be worth doing? Make a few days before the end of the year to sketch out a couple of crazy dreams.

And we’ll look for you on the flip side …

Previous article: How to Create an Agile Content Marketing Strategy (and Stay Sane Doing It)
Next article: 14 Foolproof Proofreading Tips for Bloggers