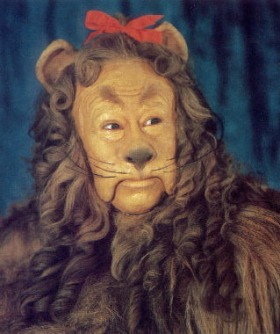 Ever feel like you’re a little bit of a … coward?

No, you’re not spending your days hiding, running, and weeping, but you haven’t exactly lived up to your expectations, either.

Your blog isn’t getting nearly as much traffic as you thought it would. You still haven’t finished that product you intend to sell. In fact, months or years have gone by, and you haven’t made much progress at all. You’re beginning to wonder if you ever will.

You could rattle off a dozen reasons as to why, and most of them even sound pretty reasonable, but down deep, you know there’s only one thing really holding you back:

You’re afraid of telling your family and friends to leave you alone so you can work.

You’re afraid of creating a product no one will want to buy.

You’re afraid of quitting your job and watching the bills piling up and having everyone look at you like a failure.

You know entrepreneurs are supposed to be big and bold, laughing in the face of danger and persisting even when the whole world has turned against them. You know you have to take risks. You know you’ll never be in control of your life until you can get some time away from your friends and family and job and start working on what’s important to you.

Yet, you can’t seem to make yourself do it. You’ve been trying for so long that you’re even beginning to wonder if you’re not cut out to be an entrepreneur.

But it’s not true. To prove it to you, I’d like to take you back all the way to 1939 and reintroduce you to an unlikely hero you might have forgotten.

In the classic film The Wizard of Oz, the Cowardly Lion is … well … a coward.

He’s so afraid of everything that he can’t sleep. He cries when Dorothy slaps his nose. He runs for his life when the Wizard gets angry.

And he’s ashamed of it. So ashamed, in fact, that he can’t believe Dorothy and her companions would even allow him to travel with them.

Most struggling entrepreneurs have exactly the same problems. They can’t sleep, they’re terrible at conflict management, and they get really skittish around authority figures.

When they fail, they move to a different city, switch careers, and sometimes even abandon their family, all because they can’t stand to have anyone look at them.

But it doesn’t have to be that way. The Cowardly Lion was able to overcome his fears, and so can you. You don’t even need The Great and Powerful Oz to give it to you.

How to conquer your fears

In the film, the Wizard hands the Cowardly Lion a medal and tells him he has just as much courage as any hero, giving the Lion’s story a sweet and satisfying ending.

That’s profound, but it also leaves a big question unanswered: how do you convince yourself to act when you’re scared to death?

Well, let’s take a look at the story.

1. Get disgusted with yourself. When The Cowardly Lion comes across Dorothy and her friends in the woods, he’s so overcome with shame that he can’t stop weeping. He desperately wants to be courageous, and that desperation propels him to go see the Wizard of Oz.

It’s counterintuitive, but for most of us, that’s the way motivation works. If you want to do big things, stop waiting for a time when everything is perfect, and you feel comfortable. It’ll never happen. You’re far better off thinking about how crappy your situation is, getting genuinely frustrated with yourself, and then using that emotion to push yourself to make changes. Misery is a useful tool. Use it.

2. Find a mentor. The Wizard Of Oz could have given The Cowardly Lion a medal for courage the first time he came to see him, but he didn’t.

Instead, he gave him a quest, a chance to grow and to prove himself and to ultimately discover that he always had what he was looking for. That’s what good mentors do. They don’t actually give us anything; they merely guide us through discovering it for ourselves. And that’s indispensable.

3. Test your assumptions. By going on a quest to retrieve the Wicked Witch’s broomstick, The Cowardly Lion challenged his assumption that he was a coward, and he ended up proving himself wrong.

That’s what we all have to do. One of the greatest lessons from cognitive psychology is you can’t trust your own thoughts. When we’re depressed, we all become negatively biased, believing the way we see things is the way things are, and that’s not usually true. If you challenge your assumptions, you’ll usually find out things aren’t nearly so bleak as you think they are, and you can do a lot more than you think you can.

That little voice in your head is not, as it turns out, all-knowing. Pay no attention to the man behind the curtain.

4. Fight for someone else. The Cowardly Lion would rather have run than try to protect himself, but when Dorothy was kidnapped by the Wicked Witch of the West, he stormed a castle of winged monkeys to save her.

If you look into the past of almost any successful entrepreneur, you’ll find they had partners pushing them, depending on them, and cheering for them. It’s a perpetual source of motivation, and you can draw on it to do things you would’ve thought yourself incapable of doing.

5. Remind yourself of successes. When The Cowardly Lion returned triumphant, the Wizard gave him a medal for courage to remind him that he’s a hero.

Most people aren’t aware of this, but in the novels following the original The Wonderful Wizard Of Oz book, The Cowardly Lion continued doing brave deeds, and he continued to be afraid, but he reminded himself of his successes and continued anyway.

One of the best ways to build your own self-confidence is to keep a journal of your own victories over fear and to regularly reread them to give yourself courage. We all tend to get fixated on our failures, but having a record of your successes is a good way to keep yourself positive.

The sad truth about entrepreneurship

The fear never goes away.

You just get better at dealing with it.

But it didn’t stop me, and really, I think that’s what defines people we call heroes. They’re just as afraid as anyone else, but they keep going anyway.

They’re willing to lie in bed, sweating and worrying about how they’ll pay the bills.

They’re willing to do the unpopular thing and for everyone to think they’re an ass.

They’re willing to invest years of their life into a product, only to see it flop and have to start over again.

It’s not because they’re special. They just know the price, and they’re willing to pay it.

And really, that’s the secret. So many people I see trying to build businesses online invest all of their mental energy into SEO or the fine points of pay-per-click, or even writing killer content.

Mindset is what lets you turn tactics into an actual thriving business. It’s what lets you pay the price, to act when you’re scared out of your pants.

And you have to proactively create it. If you hang around successful people, you’ll notice they go to a lot of seminars, listen to a lot of motivational material, and surround themselves with other successful business people trying to do the same things.

It’s not a coincidence. They understand the value of mindset, and they set aside time every day to work on that mindset, to put themselves into the proper frame of mind to stand up and fight.

Because at heart, we’re all cowardly lions. Everyday, we have to wake up and remind ourselves how to roar.

Previous article: Has the Internet Made Teaching Lucrative?
Next article: The 6 Essential Steps to Writing a Killer Press Release