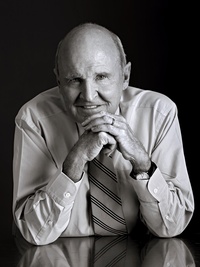 To say Jack Welch is cocky is a gross understatement.

Legend has it that some twelve years after he joined GE , Welch announced at his annual performance review his plan to become CEO.

And that was in fact just what the brazen young engineer did. In 1981, Welch stepped into the roll of GE’s youngest Chairman and CEO ever.

During the first five years of his tenure, Welch cemented his reputation as he eliminated employees ruthlessly, earning the title “Neutron Jack”– the people vanished but the buildings remained. From 1980 to 1985, he cut 112,000 jobs.

What was his hang up? Welch was obsessed with dismantling nine-layers of bureaucracy, cutting inventories, shutting down factories, reducing payrolls and cutting lackluster product lines.

He had a ferocious desire for efficiency. And profit.

Introducing the Most Successful Manager of the 20th Century

Some criticize Welch as mean-spirited and petty. Brutal. Apathetic. Others claim he’s quick to judge. Says he used limited information to size people up. And write them off.

But one thing can be said about him: he was successful.

During his 20 plus year tenure, GE’s market capitalization rose from $13 billion to $400 billion. Revenues grew from $27 billion to $127 billion. And earnings grew tenfold.

In 2000, Fortune magazine said Jack Welch was “Manager of the Year.”

The Single and Solitary Rule to Welch’s Success

What was the key to his success? Certainly more than one factor contributed to it. But if I was to name one singular and solitary reason for his dominance I’d say it’d have to be his philosophy to cut any businesses that GE couldn’t be #1 or #2 in.

This concept was a simple way to make quick, sound judgments. And to remain focused, lean, fast and competitive.

Ideas, projects or business that couldn’t meet this criteria were thrown on the trash heap. Welch was obsessed with keeping GE trim and in fighting shape. Fat nor sloth were welcome.

How can this idea help you in blogging? Easy. Figure out what market you can enter where you are guaranteed to be #1 or #2.

Why This Is So Important

Almost everyone you know–including yourself–has failed at blogging. When I say fail I mean that most everyone has at least one languishing or dead blog in their history.

If you don’t, I think statistically you will in the next two years.

There are three factors that will contribute to your blog failure:

When you use Welch’s principle this is what it does: it gets you to focus. And it has one other unintended effect.

Watch blog launches by successful bloggers and you’ll get the sense that not only did they take Welch’s principle into consideration–but they in fact live or die by it.

Darren Rowse did this when he launched TwiTip. And the truth holds for Dosh Dosh and Copyblogger. These bloggers launched blogs they were fairly confident they could dominate as #1 or #2.

Regarding TwiTip, no one else is doing anything remotely close to it. It’s a unique, early adopter blog. In this post, Darren said he’d been toying with the idea (read: evaluating the market and seeing that no one else is doing it) for quite some time and then finally decided to pull the trigger.

The same is true for Copyblogger. Before Brian Clark launched his blog there was…well, no one. Lots of tech blogs. Political blogs. Cultural blogs. Some social media blogs. Blogs on marketing. But no blogs dedicated to online copywriting tips applied to content–it was the first.

But you can’t always be the first. Case in point, Dosh Dosh.

Maki had a monstrous mountain of competition already on the playing field. And new marketing and copywriting blogs constantly emerging. But he’s defined himself pretty narrowly:

What You Need to Do Next

Domination demands positioning yourself to win. It also demands hard work. But it’s well worth the investment. Just ask Darren, Brian or Maki.

So. Wanna start a blog? Or resurrect the languishing one? Or overhaul the lackluster yawn-fest you are working so hard on now?

Then decide what topic you can dominate the #1 or #2 spot. And get to work.

Previous article: Confessions of a Trackback Spammer: Please… Stop Me!
Next article: Is Your Copy Less Than Fresh?