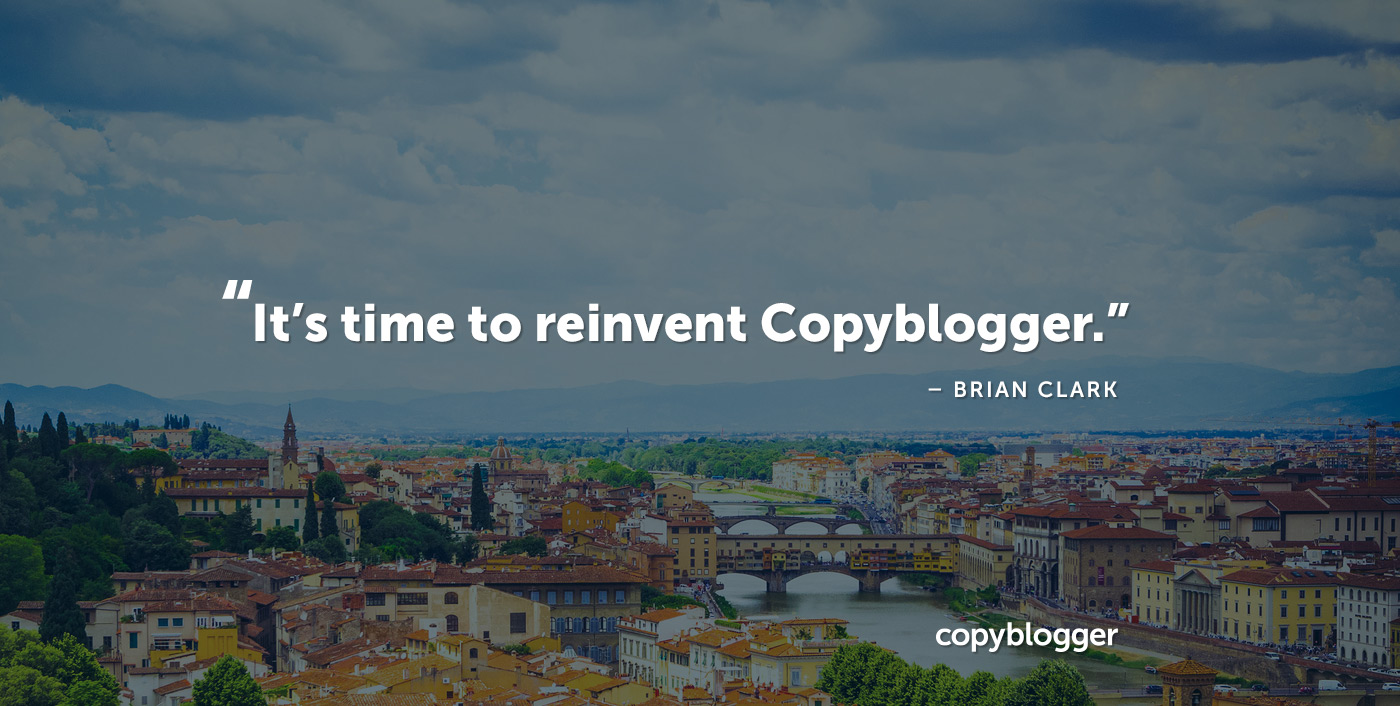 Hello, my name is Brian. I’m the founder and CEO of Copyblogger.

Okay, you may already know that. My point is, you haven’t seen me around here all that much.

For many of the last nine years, my work as CEO has kept me busy on things other than the catalyst that made it all possible. Namely, writing here at Copyblogger, where it all started over 13 years ago.

And then last year, following the sale of our StudioPress division to WP Engine, I took a much needed break after hitting it hard for over a decade. My family and I went on a seven-month trip around the world, and it was wonderful to reconnect with my wife and children while exploring and living in new places.

Then, when I returned to the U.S. in March of 2019, we sold our Rainmaker division as well. Which left us with, well … Copyblogger, the platform that served the audience we owed our success to.

The question then became, what next? We toyed with the idea of selling the final piece, and even had some fairly serious discussions with a few suitors.

But that was a tough proposition. No one can possibly pay enough to compensate for what this site means to me, both strategically and sentimentally.

Still, something had to change. With the vast majority of the company acquired, our 5-person partnership structure no longer made sense.

Plus, Sean Jackson was pursuing his THINKERS Notebook venture, Sonia was focusing on Remarkable Communication again, and Tony Clark was ready to move on to other things.

That’s when we got a proposal that I frankly hadn’t considered. Instead of selling Copyblogger, those three partners could cash out and move on, while a new partner would take their place.

The idea was brought to us by the fifth Copyblogger partner, Brian Gardner. And the buyer was his business partner in Authentik — Darrell Vesterfelt. But there was one condition: I had to come back to Copyblogger and remain involved.

A year ago, I would have said no. I have Further, and Unemployable, and Your Boulder. These side projects have shifted to serious business ventures, and they’re more than enough to keep me busy and engaged.

But Darrell’s enthusiasm for Copyblogger was infectious. He got me excited about what we could do, so I said yes to the deal — on the condition that Stefanie Flaxman stayed on board (thankfully, she didn’t hesitate for a second).

And while it took effort, creativity, and compromise from all involved, the deal was done. Sean and Tony are now off on new adventures. Sonia said her goodbyes last week, and it’s clear from the comments that she’s had a major impact on so many of you (but don’t worry, you’ll still see her around here from time to time).

So, what’s next? Well, there’s a lot to that, so Darrell and I recorded a special episode of Copyblogger FM to bring you up to speed:

What’s Next for Copyblogger Media?

Exciting times ahead … thank you for coming along with us!

Previous article: Life After Copyblogger for Sonia Simone
Next article: The Content Crossroads: Supernatural Success at the Intersection of Ideas