Bloggers and rappers are pretty much the same people. As Chartreuse smartly pointed out:

What we have in the blogosphere is the generation that grew up on Tupac vs. Biggie playing the same game in their universe.

Not convinced? Here are six similarities that leave very little room for doubt.

But I, somehow, some way / Keep comin’ up with funky a$$ sh*t like every single day. ~Snoop Dogg, Gin and Juice

Rappers are notoriously prolific, some of them releasing mixtapes on a monthly basis, delivering torrent after torrent of catchy street bangers. Prior to making it big, 50 Cent holed up in a studio and produced 36 songs in two weeks, and Lil’ Wayne seems to be releasing a 20-track album each month. In 2005 and 2006, The Game approached this level of productivity on the mixtape circuit. The list could go on.

Bloggers are also prolific, some of us producing upwards of 1,500 words per day or more. Our material might not be “funky @ss $h*t,” but we do come up with it “like every single day.” A-List bloggers like Markos Moulitsas, Scoble and Gina Trapani bust out blog posts faster than I can dictate, and Darren Rowse of ProBlogger.net remarked that during the beginning of his blogging career he was publishing 20-30 posts per day.

Similarity #2: Guest Appearances as a Major Key to Success

Guest blogging is also a common means for gaining exposure on the blogosphere. Leo Baubuta, whose wildly successful Zen Habits blog gained over 30,00 subscribers in one year, said his guest posts were really what helped him take off. 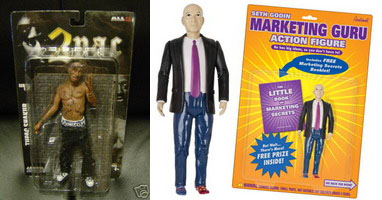 All top 10 bestselling rap albums of 2007 are credited to a single artist, not a group. And although occasional rap groups find success, the personalities of individual rappers tend to shine past group affiliations. Rap is personality-driven in a way that rock music (and certainly classical music) just isn’t.

The same goes for blogging. Bloggers, not blogs, are the superstars. Coppyblogger is Brian Clark, Problogger is Darren Rowse, IttyBiz is Naomi Dunford, Perez Hilton is Mario Lavandeira, and Dooce certainly is Heather Armstrong. It’s much easier to identify with a person than a website, and personalities shine past brands even on team-produced websites.

Plenty of rappers say, “I’m not a rapper, I’m a businessman.” ~Rolling Stone

Rappers might be backed up by other signers, signed to labels, and produced by producers, but no one tells them when, how, and why to work. Furthermore, they often work from home studios, from the road, or from any place they happen to be when inspired to write new lyrics.

The same goes for most bloggers. We tend to call the shots, work from home, and rise and fall with the popularity of our websites. There’s no one catching us when our subscriber count drops.

Personal alliances, friendships, and creative and collaborative relationships run strong between rappers. Established rappers promote their friends, cite their peers, produce beats for colleagues, make guest appearances on allies’ albums, and help their friends get record contracts. Some of the more famous alliances existed between 50 Cent, Enimen, and Dr. Dre, as well as between the Notorious B.I.G., Sean (Puffy) Combs, and Lil’ Kim.

Bloggers form similar alliances. Circles of friends swap guests posts, create blogging networks, link to and interview each other, etc., and the blogosphere can sometimes seem a little incestuous. Mess with the wrong blogger and you may get blacklisted by their network. I’d rather not go about naming crews in the blogosphere, but if you’ve been around here long enough (um… one day?) the alliances will pop out. You’ll see them.

Freestyle = To make up a rap as you go. Could be a battle, a poem, or just a rap. ~Urban Dictionary

I’ve been rapping for about seventeen years, okay? I don’t write my stuff anymore, I just kick it from my head, y’know what I’m sayin’, I can do that. No disrespect, but that’s how I am. ~Young Churf

Freestyle rap is the live and improvisational creation of rap lyrics. The style is uncut, non-scripted, unrehearsed, and typically raw, although many artists have a ready supply of prepared lyrics and rhyme patterns they can use as filler or even around which they can build their set. Freestyling abilities have brought mainstream attention to previously unknown rappers like Eminem, who was discovered when he placed 2nd in the 1997 L.A. Rap Olympics. Many rappers are constantly freestylin’ in their heads to maintain their abilities. While freestylin’, every word isn’t made up: there might be fragments of phrases floating around in the rappers head that are strung together at the last moment.

Like rappers, bloggers often sit in front of their computers, knowing they need to get a post out but not quite knowing exactly what they’re going to say. What results is improvisational, raw, and only-draft material, and some of my own favorite posts have come because of this. Check here to see Leo Babuta freestyle.